My admiration for St. Michael the Archangel has grown significantly since the start of the worldwide Covid-19 pandemic last year.  Besides taking the necessary health precautions recommended by the CDC - quarantining, mask-wearing, frequent hand-washing, social distancing, etc. - I also take "spiritual precautions", which includes carrying a theca (round reliquary case) containing small stones from St. Michael's Cave/Grotto on Mt. Gargano in Italy.  Since doing so, I've experienced manifestations of the Archangel's presence, which I sense have broader implications than for just me, alone - one was a remarkable dream last November that I interpreted to be a warning of some sort... while the other involved the cave stones. 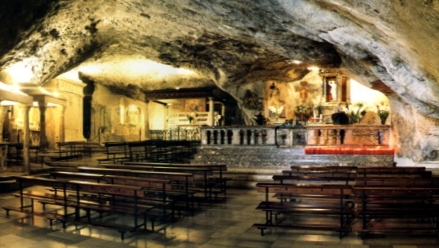 The interior of the Sacred Grotto of St. Michael
the Archangel atop Mt. Gargano, Italy.
For those not familiar with the history of this singular grotto, it's the hallowed site of a series of Church-approved apparitions of St. Michael beginning in 490 AD.  At the very first appearance, the Archangel showed himself to the local Bishop and claimed possession of the cave with these words:
"I am the Archangel Michael and I am always
in the presence of God.  The cave is sacred to me.
I have chosen it."
When the bubonic plague ravaged the region in 1656, the people had recourse to the great Archangel while doing public penance.  In response, St. Michael returned and directed the current bishop to distribute stones taken from within his cave, marked with crosses and the initials "M.A." (for "Michael Archangel").  St. Michael added:
"I am the Archangel St. Michael.  Anyone who uses
the stones of this grotto will be liberated…"
Needless to say, the prelate followed the Archangel's instructions and the plague soon ceased in the towns around Mt. Gargano.  This miraculous intervention started the tradition of the shrine distributing "St. Michael relic stones", which is still continued today by the Congregation of the Michaelite Fathers who are the present custodians of the holy cave.
Since late 2018 I've obtained several grotto stones, encased in gold-colored metal thecas by the Mt. Gargano Shrine.  I gifted them to loved ones and priest-friends, and kept two for myself; placing one on a home shrine and the other is what I carry with me for physical and spiritual protection whenever I leave my house (a big comfort in this time of pandemic).  It's the stones on the altar that recently manifested unusual phenomenon.
As already mentioned, the St. Michael stones are in golden thecas.  Well, imagine my surprise when I went to pray at my altar and found the theca had turned from gold to silver!  This happened in late September 2020 and I know for sure the theca was gold when I first received it... and it looked the same the last time I saw it just a day or two before.  I did not do anything to change the theca and I was completely perplexed, and I still am... especially because it was followed not long after by that impressive dream of the Archangel; the two events seem closely related. 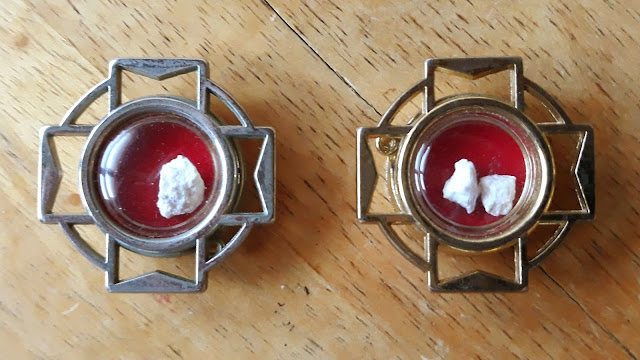 The theca on the left mysteriously changed from a
golden color to silver, as compared to the theca on the
right, which is what it originally looked like.
Since this occurred, I've often prayed to St. Michael asking him, "Why? Why the color-change? ... because Heaven never gives us signs without a good reason.  So what exactly was the Archangel trying to communicate through these seeming signs, particularly the theca, which is something quite tangible?  I've heard of, and seen, silver-colored sacramentals changing to a gold color, or actual gold (e.g. medals and rosary links) - which would be easier to interpret - but not the other way around.
To date, I haven't received further spiritual experiences in response to my prayers, nor do I expect any... but still - Why, St. Michael?  What's going on that I or the world need to know about?
In my search for a possible answer I recently googled the significance of silver in the Bible and found these passages from the Psalms.  Perhaps they provide a hint of what St. Michael is trying to convey through the sign in silver:
"The promises of the LORD are pure, like silver
refined in a furnace and purified seven times."
‐ Psalm 12:6
+ + + + +
"You have tested us, O God.  You have refined
us in the same way silver is refined."
- Psalm 66:10
Interestingly enough, and maybe a bit concerning, both Scriptures have something in common - they speak of the process of silver being "refined"... which, significantly, is another word used for purified or cleansed.  So is the theca's change to silver a symbolic affirmation that the world is currently undergoing a period of intense testing and refining?  Or, is it an indication of a worldwide purification that's still to come?  Or, still, perhaps it's an invitation for just me to continue working on areas in my life that need cleansing?  Whether this little sign is intended to signify refinement, or not, spiritual purification is still something worth reflecting on especially during this upcoming Lenten Season.  I do know one thing for certain, though - regardless what, I'm standing with St. Michael. 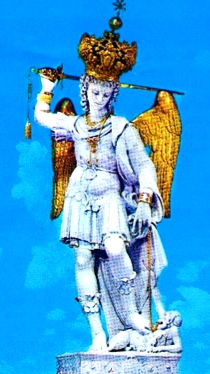 St. Michael the Archangel, help us
and protect us!
"At that time there shall arise Michael, the great prince,
guardian of your people; it shall be a time unsurpassed
in distress since the nation began until that time."
- Daniel 12:1
+ +  UPDATE: AUGUST 2021  + +
In response to this mysterious occurrence and the impressive dream of St. Michael that followed, this ministry has established a prayer group under the Archangel's patronage - the Cohort of St. Michael the Archangel - with the specific purpose of combating evil in this world.  For more information concerning the new group, click here.
Stand with St. Michael!
Peter @ Guadalupe House Ministry, Honolulu