Another relic makes the news... 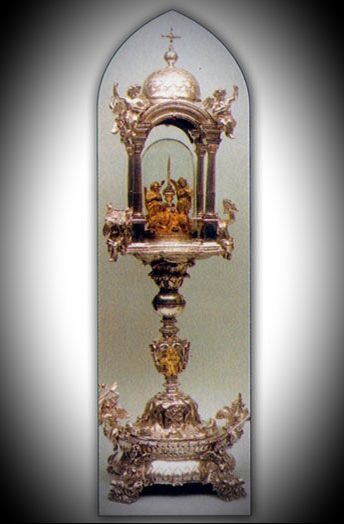 Here's another interesting article related to relics... this time around it's one about a Church-recognized relic of Christ, himself - a single, entire thorn allegedly taken from the Crown of Thorns... and, not surprisingly, there are miraculous signs associated with it!  Read on... 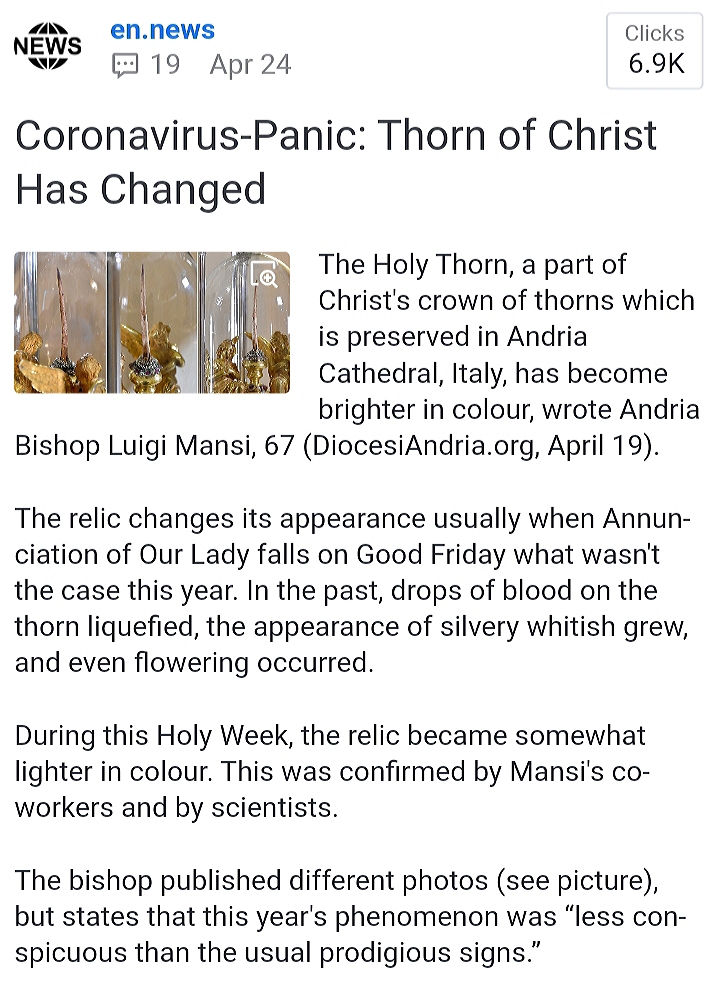 This article was sourced from Gloria.tv with the photos below from the Diocese of Andria, Italy. 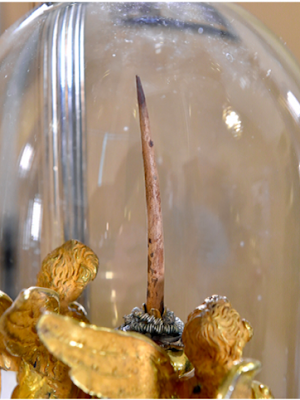 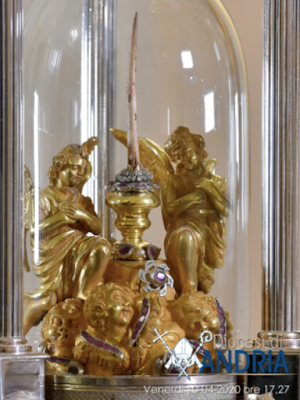 Photos of the Sacred Thorn, showing its subtle, but noticeable,
transition to a lighter color (note the tip).

Monthly Message from the Queen of Peace of Medjugorje: April 25, 2020

“Dear children!  May this time be an incentive for personal conversion for you.  Pray, little children, in solitude, to the Holy Spirit to strengthen you in faith and trust in God, that you may be worthy witnesses of the love which God bestows upon you through my presence.  Little children, do not permit trials to harden your heart and for prayer to be like a desert.  Be a reflection of God's love and witness the Risen Jesus by your lives.  I am with you and I love all of you with my motherly love.  Thank you for having responded to my call.”

After having prayer time this morning, I experienced a strong urge to translate into imagery a "message" that was floating around in my head. So I picked up my Sharpie and started doodling. The end result, I feel, is worth sharing... so here it is - I hope people find the message uplifting, especially in these anxious times. 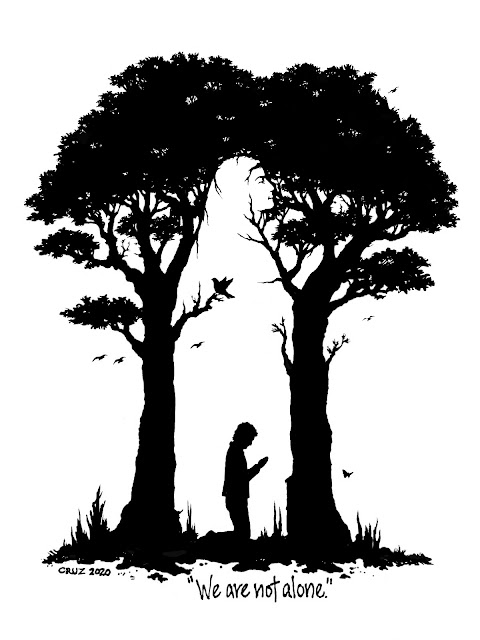 Can you spot the 5 hidden images in this drawing?
(click on the drawing to view a larger image)

To view more unique spiritual artwork,
and for a clue as to what other images are in this drawing,
visit the Guadalupe House Art Gallery by clicking here.

I chose this Saint - Mary of Egypt - for April because I think many will find her life relatable and timely, given our present worldwide circumstances: St. Mary was a reformed sinner and penitent, which makes for a great Lenten reflection... and she lived for quite a while in self-isolation and was deprived of the Eucharist, too. Seem familiar? Go ahead and keep reading... allow St. Mary of Egypt to touch your heart with the love and mercy of God.

According to written accounts dating back to her times, this particular St. Mary was born in Egypt, circa 344. For reasons unknown, she was a runaway at the age of 12-years-old and found herself in the busy port city of Alexandria. To survive, Mary at first begged in the streets, but soon found it wasn't enough... so, likely out of sheer desperation, she turned to the world's oldest profession - prostitution. Sadly, rather than being repulsed by the perverse trade, the poor girl became allured by it and fully gave herself over to carnal passions.

St. Sophronius of Jerusalem, Mary's earliest biographer, further relates that she lived in a hedonistic manner for 17 years. She was so dissolute, she boarded a ship bound for Jerusalem to be present for the Feast of the Exaltation of the Holy Cross. Instead of being spiritually motivated, though, her true intent was to gain new clients among the thousands of pilgrims who'd be participating in the annual veneration of the True Cross.

An icon of St. Mary of Egypt showing key
moments from her life.

On the day of the Feast, crowds gathered in the Church of the Holy Sepulcher where the relic of the Holy Cross was enshrined; Mary was there, but when she tried to enter the church, she found herself repeatedly repelled by an invisible barrier. Realizing that it was her sins that prevented her from entering such a holy place, Mary's initial surprise and confusion were soon replaced by fear and remorse.  Seeing an icon of the Blessed Virgin nearby, she pleaded with Our Lady for the grace to enter the house of her Divine Son, promising to reform her life if she was allowed to do so.  Her  prayer was granted and she entered the church with no further difficulty.

Filled with regret over her sins, Mary dissolved into tears while she reflected before the sacred relic; the mysterious experience had the effect of a sudden and lasting conversion. On leaving the church, she stopped at the same icon to give thanks to Our Lady and heard a voice say to her, "If you cross the Jordan, you will find rest."  Mary wasted no time in executing her vow - she headed out and reached the river by evening. At the Monastery of St. John the Baptist, Mary confessed her sins, was absolved, and received Holy Communion before crossing the Jordan the next morning.

Mary disappeared into the vast wilderness of the Middle East for 47 years, where she apparently lived a solitary life as a hermit. Her life would have been lost in obscurity had not a priest named Zosimus (a Saint in the Orthodox tradition) providentially encountered her during his Lenten retreat in the desert. The penitent - aged and worn - was barely clothed in tattered rags but used her abundant hair to hide her nakedness before the man, whose priestly dignity she recognized through divine inspiration. Zosimus clothed her with his cloak after which the two began a long conversation in which Mary revealed her backstory to him. Before parting, the hermitess extracted a promise from the priest to return to the same spot on Holy Thursday of the following year, to give her Holy Communion. 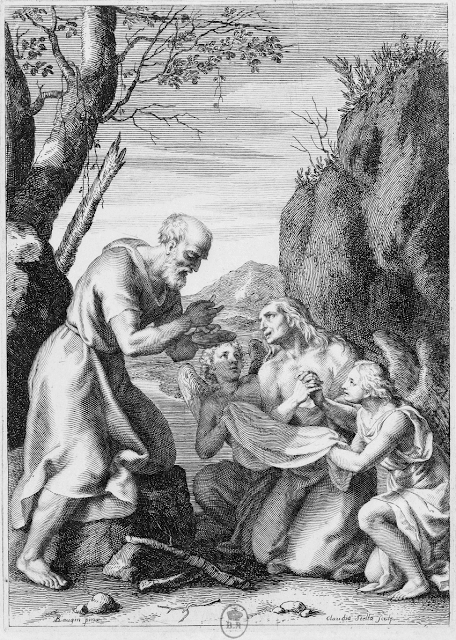 As the agreed upon date neared, Zosimus went out into the desert to fulfill his promise to Mary. As he neared their meeting site, he saw her approaching from the opposite bank of the Jordan River. To the priest's surprise, he witnessed the hermitess make the sign of the cross over the river before proceeding to miraculously walk over its waters towards him!  Mary then received the Eucharist with rare devotion and uttering the words of St. Simeon, "Now thou dost dismiss thy servant, O Lord, according to thy word in peace, because my eyes have seen thy salvation." As with their first meeting, before parting ways she entreated the priest to come again the following year.

It goes without saying that Zosimus did not hesitate to meet the holy woman the third time around. However, upon reaching the designated spot, he found Mary dead; her body in peaceful repose, wrapped in his cloak and guarded by a lion; written in the earth, beside the corpse, was a request to have her remains provided with a Christian burial. The priest dug the grave assisted by the lion and, after the funeral, the beast bounded away and Zosimus returned to his monastery where he related details of Mary's remarkable life to his brethren. The story was passed on, via oral tradition, before being set down in writing by St. Sophronius. According to the written account, St. Mary died, circa 421, being approximately 77-years-old.

As we near this year's Holy Week burdened by the effects of the ongoing pandemic - isolated in our homes without the comfort of public worship and the Eucharist - let us be inspired and encouraged by the life of St. Mary of Egypt. The Holy Virgin directed her to live in solitude in the desert so as to find "rest". May we come to view our own isolation as a wilderness where we, too, can find rest from the troubles of the world... and like St. Mary of Egypt, we patiently await the coming of Christ in the Eucharist, which in due time, will resume. God's divine providence will arrange it just as it did for this Saint.

St. Mary of Egypt, pray for us!