Monthly Message of the Queen of Peace of Medjugorje: November 25th, 2021

"Dear children!  I am with you in this time of mercy and I am calling all of you to be carriers of peace and love in this world where, through me, little children, God is calling you to be prayer and love, and an expression of Heaven here on earth.  May your hearts be filled with joy and faith in God; that, little children, you may have complete trust in His holy will.  That is why I am with you, because He, the Most High, is sending me among you to encourage you to the hope; and you will be peacemakers in this peaceless world.  Thank you for having responded to my call."
Peter @ Guadalupe House Ministry, Honolulu No comments:

Coincidence or Something More?

Something big is about to happen in our times, if it hasn't already started - a major shaking up in the world; bigger than Covid-19.  God is simply giving us so many, many remarkable signs these days - it just has to be.  At least that's my personal opinion.
Just this afternoon, while driving home from work, I was praying my St. Michael prayer group's "Cohort Chaplet", which I do daily against the forces of darkness at work in the world.  Reflecting on how evil has such a strong grip on society, I was surprised to see in the sky, ahead of me, a massive image of the Lord formed by a cloud.
It was Jesus' Holy Face in profile and it couldn't be any clearer - features such as an eye, cheekbones, mouth, mustache, and beard were easily recognizable... and his expression was one of intense anguish.  I was awed by the sight but also very disturbed since it brought to my mind the Lord's agony in the Garden of Olives. 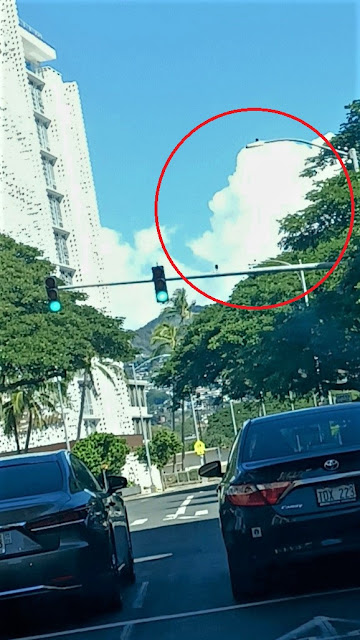 The profile of the Holy Face of Jesus, as it
appeared formed by clouds over Honolulu.
I managed to take one photo, which although is not as sharp as I hoped it would be, it at least captures the profile. 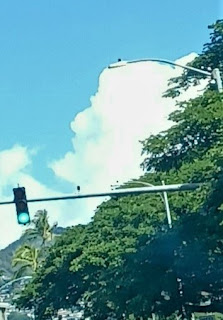 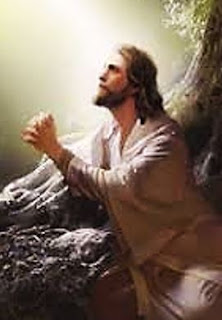 A closer view of the image: The expression
was one of pain and reminded me of the agony
in the garden like the painting on the left.
The scene only lasted for a few moments but seeing the image deeply impressed me; inspiring me to finish the chaplet with more fervor... and a nagging sense of urgency.  I asked Jesus the reason for his pain and within my soul it seemed to me that I "heard" the following response:
"I am once again being crucified...
Pray and make reparation."
Somber words; almost ominous... but was this all just a coincidence - another instance of what I refer to as "spiritual serendipity"?  Or was it something more from Jesus that requires serious reflection on our part?  As mentioned at the start, I have my opinions and, if I feel strongly enough about an unusual experience, I'll post about it... but leave it to each reader to discern and respond for him/herself.  In all things, may God bless us and help us.
Jesus, forgive us for we know
not what we do.  Have mercy on us.
In you we trust, O Lord.  Amen.
Peter @ Guadalupe House Ministry, Honolulu No comments:

Holy relics of six Saints and Blesseds on
display at St. John Vianney Church.
Our Saints - what is there not to love?  In life and in death, the Saints LOVE us... they HELP us... they INSPIRE us... they PRAY for us... and they even HEAL us.  In short, they mirror CHRIST to us - perfectly... and during my Saints & Relics Presentations, I emphasize all these attributes of our holy forerunners.
And so it was with the October 25th presentation at St. John Vianney Church in Kailua.  This ministry spoke to the parish's RCIA leaders and students about our Church's long-standing tradition of devotion to Saints, and featured the following saintly individuals and their respective relics: Bl. Alexandrina Maria da Costa, St. Bernadette of Lourdes, St. Charbel Makhlouf, St. Gianna Beretta Molla, Bl. Josaphata Hordashevska, and Bl. Rolando Rivi. 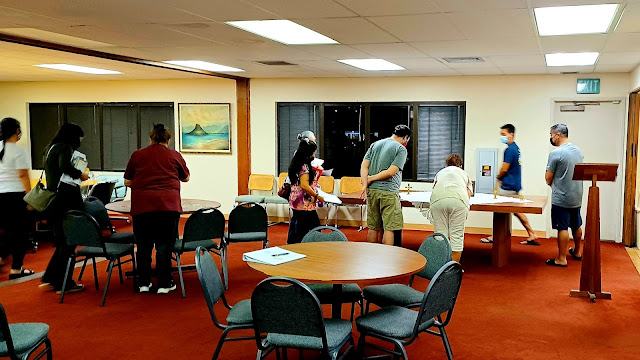 The audience viewing and venerating the
relics after the presentation.
The group's response to the presentation; to the Saints and Blesseds; their holy relics... was exceptionally positive and enthusiastic.  Praise the Lord!
For everything good they represent, our Catholic Heroes - the Saints - deserve to be remembered and honored.
Happy All Saints Day!
Peter @ Guadalupe House Ministry, Honolulu No comments: 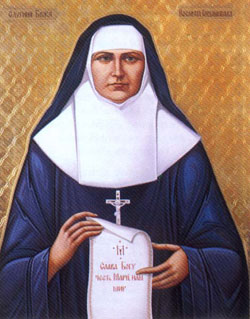 Bl. Josaphata Hordashevska
She served "where the need was greatest"
Memorial: November 20th
Born in Lviv, Ukraine, on November 20, 1869, this foundress of a congregation was baptized Michaelina Hordashevska.  Fortunately for her she had a devout family - members of the Eastern Rite Ukrainian Catholic Church - and their faith rubbed off on her.  From a young age she displayed a level of piety uncommon in children - she was inclined to pray in solitude and even practiced mortifications that included regularly eating bitter plants.
At the age of 18 while participating in a retreat, Michaelina had a powerful spiritual illumination that prompted her to consecrate herself completely to the Lord through a private vow of virginity.  She also resolved to become a religious, which in her time and place, was only possible through the cloistered Basilian Sisters.  Her spiritual director, however - a Basilian priest named, Fr. Jeremiah Lomnytskyj - had, for a long time, been discerning the need for an active congregation that would serve the temporal and spiritual needs of the people of Ukraine.  He believed Michaelina was an answer to his prayer.
In 1892, after much prayer and discernment, Michaelina heroically agreed to partner with Fr. Jeremiah in realizing a new congregation, regardless what challenges it entailed.  The priest sent her to nearby Zhovkva where she stayed in a convent of Polish Felician Nuns to learn the norms of religious life from them.
After two months of training with the Felicians, Michaelina was dressed in the blue habit she designed and professed vows as the very first member of her new congregation.  She then traveled to the village of Zhuzhelyany where Fr. Jeremiah had 7 postulants excitedly waiting to also consecrate themselves in active service to God.  Thus, on August 27th, 1892, the Congregation of the Sisters Servants of Mary Immaculate was officially born - their motto: Serve the people where the need is greatest. 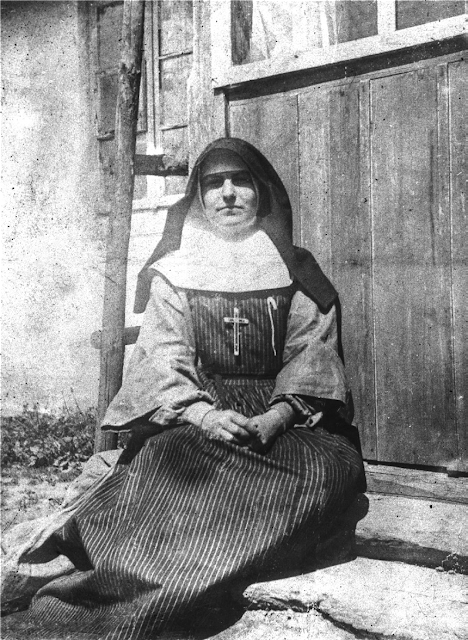 An actual photo of Bl. Josaphata Hordashevska
From the start, Mother Josaphata (Michaelina's name in religion) began earnestly forming her new sisters in the charism of serving Christ in others.  They initially implemented their mission by simply visiting their community to care-give the sick in their own homes, and babysit children who would otherwise be alone while their parents worked.  As more people began seeking their help, and support poured in, the Sisters Servants opened daycare centers where they not only watched over children, but also taught them reading and writing; they established clinics to provide basic medical care for the sick-poor; they taught catechism to both children and adults; volunteered in local parishes to upkeep churches and fulfill various ministries.  It goes without saying, their work prospered and grew.  In fact, by 1902 the congregation had 26 convents with 128 members throughout Ukraine.
Although she was the co-founder and the first nominated superior of the Sisters Servants of Mary Immaculate, sometime during the early years of her religious career, Mother Josaphata was deposed by order of the Archbishop of Lviv, and her influence suppressed, as a result of dissension that arose in the congregation; she humbly complied and never complained when she was appointed the most difficult tasks.  In May 1909 she was vindicated and reinstated to a post of authority as the Vicaress General.
Through her ups and downs in religious life, Mother Josaphata was a consistent role model of charitable service for her spiritual daughters; once described as having "loved God concretely in His needy ones".  A particular incident related of her gives us excellent example - neighbors once reported to the Sisters Servants about a dying woman abandoned in a barn.  The founder immediately set about looking for her and when she located the poor lady, she carried her to one of their clinics.  Upon discovering there were no open beds for the patient, she took the woman into her room where she laid her in her own bed, despite the patient being covered with grime and ulcers.  Mother Josaphata tenderly washed and treated the woman - sleeping on the floor beside the bed - until the patient peacefully expired under her loving care.
Mother Josaphata's own death occurred on April 7th, 1919, from tuberculosis of the bone; she was only 49-years-old.  It was an extremely painful trial, but the founder endured it with patience and faith, and even accurately predicted the exact date she would pass into Eternity!  She was initially interred in the village cemetery of Krystynopil, where local devotion sprung up around her tomb, but her remains were later transferred to her congregation's Generalate in Rome in 1982.  It was during this exhumation that her body was found to be mysteriously incorrupt. 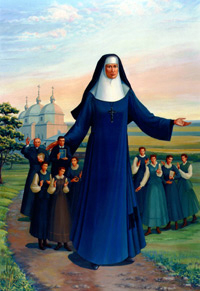 After reports continued to pour into the Generalate of favors granted through the intercession of Mother Josaphata, her Cause for Canonization was officially opened in 1992.  So far she has been Beatified by Pope St. John Paul II on June 27th, 2001; another confirmed miracle is needed to raise her to Sainthood.  Let us pray for her speedy Canonization.
Blessed Josaphata Hordashevska,
pray for us!
Peter @ Guadalupe House Ministry, Honolulu No comments: