Monthly Message from the Queen of Peace of Medjugorje: September 25th, 2022

“Dear children!  Pray that the Holy Spirit may enlighten you that you be joyful seekers of God and witnesses of love without bounds.  I am with you, little children, and, anew, I am calling all of you: take courage and bear witness to the good works that God is doing in and through you.  Be joyful in God.  Do good to your neighbor so that it will be good for you on earth and pray for peace, which is threatened because satan wants war and peacelessness.  Thank you for having responded to my call.”
Peter @ Guadalupe House Ministry, Honolulu No comments:

Saint of the Month - September 2022: Saint Sperandia of Cingoli 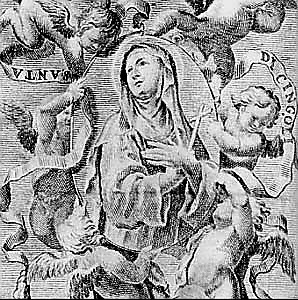 St. Sperandia
Fragrant Lily of Cingoli
Feast: September 11th
St. Sperandia is the beloved Patron Saint of the town of Cingoli in Italy.  Today, we highlight her extraordinary life as September’s Saint of the Month.
Descended from a noble family from the town of Gubbio, she was born in 1216.  Fortunately for her, Sperandia’s parents were devout Christians who diligently raised their daughter in the tenets of our Catholic Church; instilling in her their faith in God, devotion to Our Lady, and their inclination to routine prayer.
Despite their piety, though, and given their lofty status in society, her parents desired for their child an advantageous marriage to a suitor from another aristocratic family.  The young Sperandia, however, had already set her heart on Jesus for a spouse after being invited by a vision of him, at the age of 9, to live a life of consecration and self-sacrifice.  Prompted by this pivotal experience, she firmly resisted her family’s plan to marry her off until they finally gave up on the notion.
So, rather than living a life of privilege that her birthright entailed, Sperandia donned a sack cloth habit and fled her father’s villa to live a hermitical existence of prayer, poverty, and self-imposed mortification in the wilderness surrounding Gubbio.  There, she meditated on the Passion of Christ and was afforded profound visions of heavenly mysteries, as well as, frequent states of ecstatic rapture. 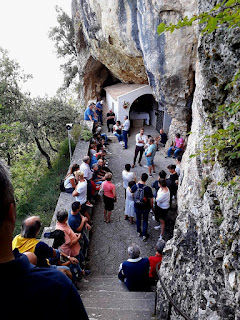 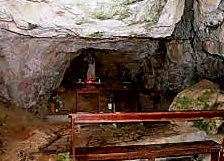 The Saint’s grotto on Mount Acuto remains
a popular pilgrimage destination
The hermitess immerged from seclusion a few years later to spend the next 10 years wandering as a pilgrim to the many sacred sites in the Holy Land, and then to famous shrines across Italy.
During her frequent stops in various towns and cities, she took it upon herself to be a street-preacher, exhorting people to repentance and conversion, while also working astounding miracles and cures through the sign of the cross.
One amusing story goes that when she visited Rome, Sperandia was somehow granted an audience with the reigning Pope, who being impressed by her air of sanctity, gave her a pair of new boots seeing that she was barefoot in his presence; the boots are still preserved as relics.
The Saint then went on to retire near the town of Cingoli, this time making her home in a grotto on Mount Acuto.  There, she resumed a solitary life, observing strict privations in an effort to conform herself ever closer to Christ Crucified… but her isolation was not to last.  Despite the remote location of her cave, people eventually discovered her hiding place. 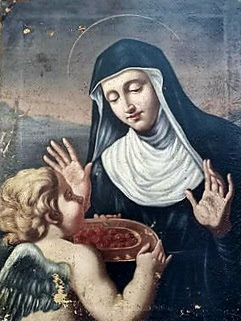 The Saint's famous "Miracle of the Cherries"
Attracted by rumors of her sanctity and miracles, pilgrims climbed the mountain to seek her and ask her intercession for their many troubles.  On her part, Sperandia compassionately dispensed advice; mediated peace between disputing parties; healed the sick; and shared whatever was gifted to her with the poor and needy.
After several years of living on Mount Acuto, the holy recluse descended from her grotto and headed to Cingoli where she requested admission at the local Benedictine Monastery of St. Michael.  The nuns welcomed Sperandia and her presence reinvigorated their community.  In fact, the Saint was elected Abbess and she reformed the community’s laxed rules while also expanding their living facilities to accommodate the influx of new candidates she attracted.  To her companions, Sperandia proved herself a tender spiritual mother, guiding her nuns by word and example to a deeper love of their Divine Spouse.
Not surprisingly, Sperandia’s reputation attracted visitors to the monastery, too, and she ministered to her clients, as needed.  Miracles continued to occur, among which is the charming story of how after feeding a group of hungry stone workers in the monastery during a cold January day, a few of them jokingly asked for cherries for a dessert (the fruit was out of season).  The Saint excused herself, offered a spontaneous prayer, after which an angel suddenly appeared with a bowl of fresh cherries, which she promptly served to the surprised laborers.
St. Sperandia passed to her eternal reward on September 11, 1276.   After taking her last breath, a delightful floral scent emitted from her corpse, which permeated the entire convent and its surroundings.   Needless to say, all the populace of Cingoli attended her funeral to pay respects to their beloved wonder-worker.  From day one, the deceased nun’s tomb became a place of pilgrimage, as numerous cures were reported through her intercession. 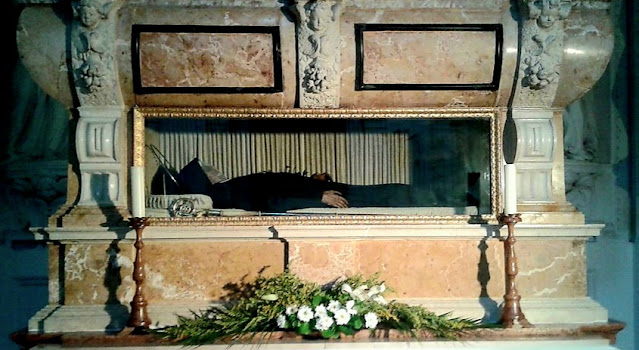 The miraculous body of St. Sperandia,
as venerated in Cingoli
During an exhumation two years after her death, the nun’s body was discovered to be perfectly preserved, as if she was merely sleeping.  The sweet aroma reported at her death was again noted.  Seven subsequent exhumations resulted in the same findings – Sperandia’s body was incorrupt and fragrant.
Unlike most Saints, St. Sperandia was never formally canonized.  She had been popularly acclaimed a Saint by the town officials and the local church in Cingoli, and the Vatican later approved her existing cultus after careful consideration of her virtues and ongoing wonders.
And speaking of wonders - to this day St. Sperandia’s body continues to defy the laws of nature by remaining intact for the past 700+ years without the aid of chemical preservatives!  It is enshrined in the church of the Benedictine Monastery of St. Sperandia in Cingoli (renamed after her), where she lived for a time and died.
St. Sperandia, pray for us!
Peter @ Guadalupe House Ministry, Honolulu No comments: 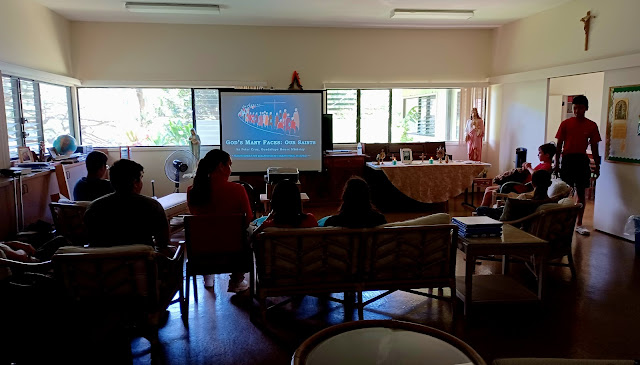 The Boys & Girls Scouts Youth Retreat
at the Convent of the Sacred Heart
Sisters in Kalihi.
Normally, it's a bit of a challenge for me to conduct speaking presentations for the youth.  The truth is, more often than not, it's harder to hold their attention for a long period of time, and there are always a few in the audience who seem downright uninterested; it's just how it is.  But I welcome the challenge and it's why I pray extra hard before a presentation and, ask others to pray too, if young children and teens are involved. 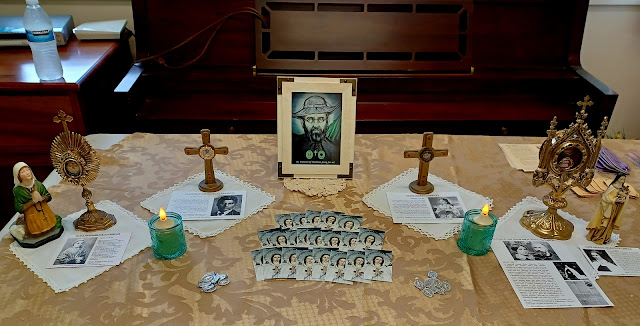 Saints/Relics featured by this ministry
at the retreat (L to R): St. Bernadette of
Lourdes, Bl. Pier Giorgio Frassatti, St.
Damien of Molokai, St. Maria Goretti, Sts.
Louis & Zelie Martin, and their daughter
- St. Therese the Little Flower.
So the many prayers offered for today must've been heard because this group of young people was very different from others - most of them seemed really engaged and highly interested in what they heard about our Saints and the relics I featured.  In fact, during the Q&A segment of the presentation, they had a lot of great questions for me; more than I usually get even from adults.  I was pleasantly surprised that these kids were apparently paying attention during the talk! 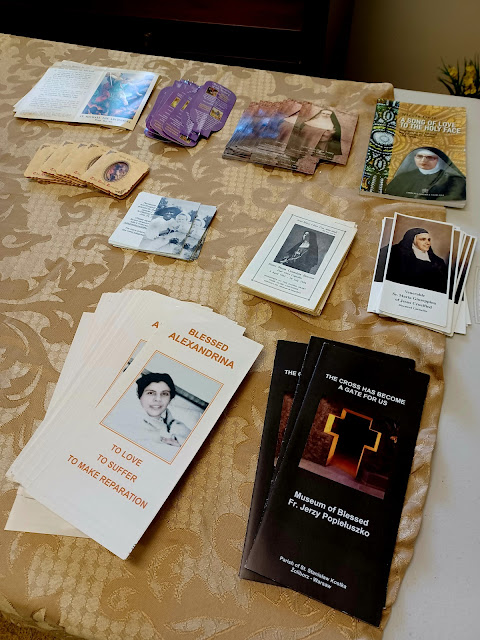 Devotional items made freely available to
the Scouts... and the young people lined up
after to venerate the Saints and Relics. 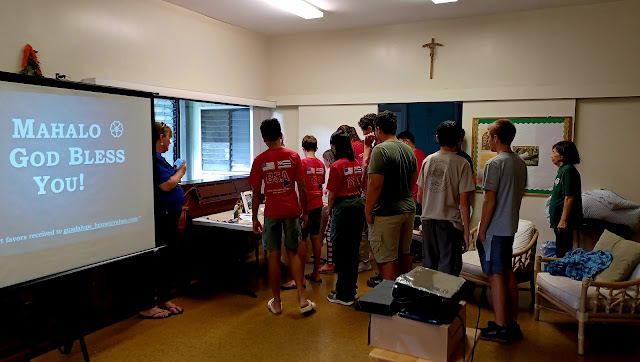 Furthermore, most of the young men approached me after the presentation to personally say "thanks", and to let me know they enjoyed themselves and learned a lot; one boy was even in tears - gently sobbing - as he said to me, "We have a beautiful Faith."  It was an unusually mature remark, coming from a teenager, and it deeply affected me.  My response was, "AMEN!  Please let the people you come across every day, who don't know that, know." to which he firmly replied, "I will."  In hindsight, only the Holy Spirit could have inspired this young man's remarkable reaction.
So, based on the feedback I received, it's evident the Saints again did their part for the presentation by planting faith-seeds and touching hearts - young hearts that urgently need their example and intervention.  God bless our youth.
A Message from the Scouts... 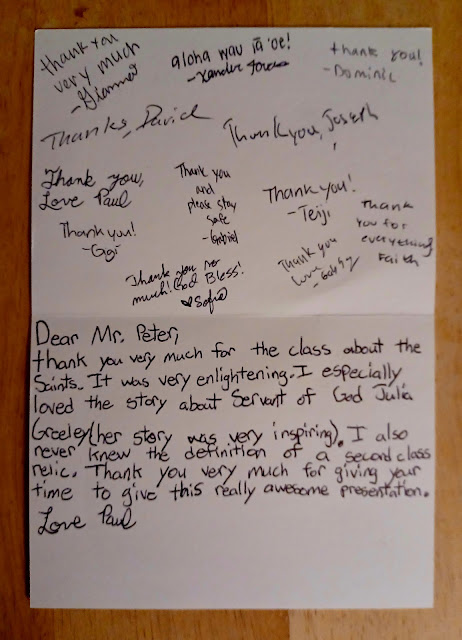