Monthly Message of the Queen of Peace of Medjugorje: October 25th, 2020 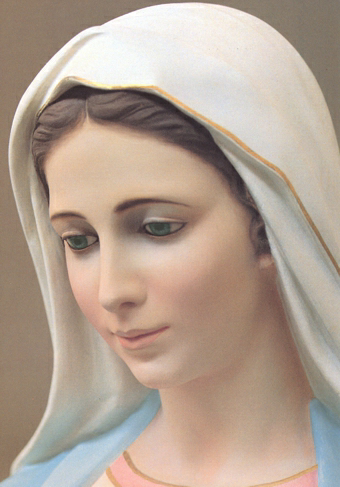 “Dear Children, at this time, I am calling you to return to God and to prayer. Invoke the help of all the Saints, for them to be an example and a help to you. Satan is strong and is fighting to draw all the more hearts to himself. he wants war and hatred. That is why I am with you for this long, to lead you to the way of salvation, to Him who is the Way, the Truth and the Life. Little children, return to the love for God and He will be your strength and refuge.  Thank you for having responded to my call.”
Peter @ Guadalupe House Ministry, Honolulu No comments: 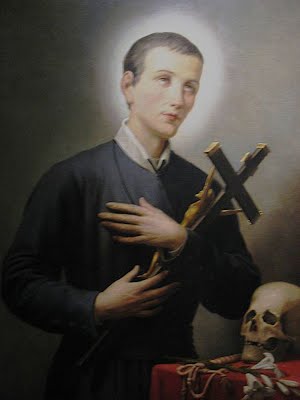 St. Gerard Majella
Patron of Expectant Mothers ~ Feast: October 16th
St. Gerard Majella died a little over 250 years ago at the age of 29, and lived all his brief life in southern Italy. Yet, today, he is honored the world over as a popular figure in Catholic devotion, especially among expectant women... but who was St. Gerard, and how and why did he come to be associated with such an unlikely patronage for a male Saint?  Read on to learn more...
From a worldly point of view, there was nothing about Gerard that was outwardly impressive - he came from a poor family; was described as scrawny; suffered from chronic poor health; was an introvert who maintained habitual silence and kept a low profile.  But from a spiritual perspective, this humble man was not just a Saint, but he was truly a GREAT Saint.  He was so lofty in spirit, God bestowed on him a long list of spiritual gifts, some of which will be described below.
Born on April 6, 1726, Gerard lost his father while still a child, which forced him to begin working early to help support his mother and six siblings.  He trained as a tailor and set up shop in his hometown of Muro, near Naples.  Whatever income he made, he kept almost nothing for his personal use - first he provided for his family then gave the rest to the needy and to his local parish as alms for the Poor Souls.  When not working, Gerard spent his spare time in charitable endeavors, as well as, in hours of prayer before the tabernacle. His outward piety inspired admiration from many of his neighbors, while to some others he was just the village's resident oddity.
Eventually discerning the call of God, our Saint applied with the Franciscan Capuchins who declined to accept him because of his frail health. After missionaries from the Redemptorist Congregation visited Muro, he requested to join them but received the same negative response.  This time around, he refused to accept the decision.  Instead, he continually hounded the Redemptorists for their acceptance to the point where he was a nuisance to them, and they asked his mother to intervene by locking him up for the duration of their mission; she discovered him missing from his bedroom one morning where he left a note stating: "I'm going to become a saint".  The youth had run away to follow the Redemptorists, who reluctantly accepted him as a lay brother in the face of his determination.  The year was 1749.
Judged incapable of holding any significant position within the congregation, his superiors shuffled Gerard amongst various Redemptorist monasteries and assigned him the lowliest and most difficult jobs - cook, gardener, doorman, janitor, and the community's alms beggar ‐ which he happily performed.  The latter task gave him the opportunity to form a close affinity with the locals - mainly peasant folk - to whom he endeared himself by his innate kindness and charitable disposition.  They came to revere him as a genuine holy man, especially since God's favor with him became increasingly manifest through outward signs and wonders... 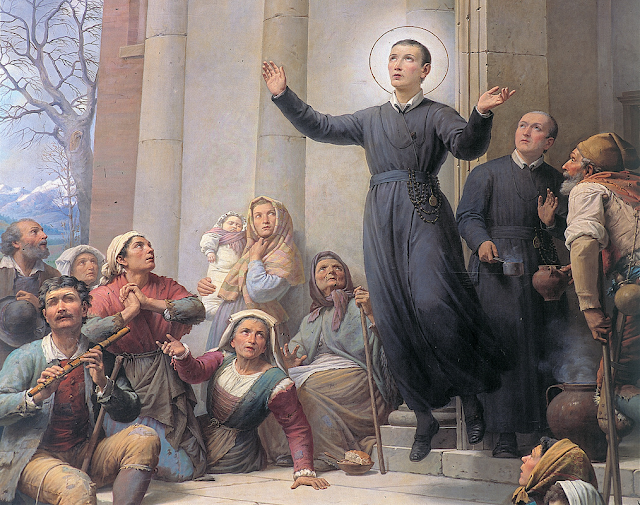 St. Gerard was witnessed on more than one occasion to rise into
the air during prayer or in the presence of holy images.
Among Gerard's rich array of spiritual gifts were the following:
+ Bilocation - on many occasions he was witnessed at two places at once.  A common scenario cited is how he was frequently seen praying before the Blessed Sacrament in various chapels around town, or visiting certain individuals on important business... but his religious brethren would later vouch that, at the very same time Gerard was seen, he was actually in their midst; actively performing his monastery chores.
+ Ecstasies - this altered state of profound absorption in the special presence of the Divine was a common phenomena in the life of St. Gerard.  It was particularly noted while he prayed before the tabernacle or before holy images such as those of the Blessed Virgin.  He would "disconnect" from his surroundings and remain motionless for hours at a time, while in ecstasy.
+ Levitation - this wonder was another grace that was well-documented in the life of the Saint.  Their occurrences were usually triggered by the sight of holy images and accompanied by ecstasy.  To cite just one such example, during Good Friday in 1753, a highly venerated painting of Christ Crucified was processed into a church where Gerard was waiting with a crowd of parishioners.  As soon as the portrait of Jesus came into his view, he was overwhelmed with love and mysteriously lifted several feet into the air, in joyous exultation, and in plain sight of all the worshippers present.
+ Odor of Sanctity - the Saint, in his lifetime, emanated a sweet aroma from his person, which was particularly perceptible when Gerard was ill because if his inability to disguise the fragrance.  The strong perfume also clung to his personal belongings so one could find your way to his cell in the monastery by following the delightful "scent trail" that emanated from him and his few possessions.
+ Prophecy - on countless occasions, Gerard clearly displayed the charism of infused knowledge and the forecasting of future events.  A notable example involved a student named, Pietro Blasucci, who the Saint informed would one day become a Superior General of the Redemptorists.  This was fulfilled in 1793 - 40 years after the Saint uttered the prediction!
Another of Gerard's prophecies that was fulfilled after he died was accompanied with a healing, another of his God-given gifts.  While leaving the home of a benefactor, he dropped his handkerchief, unawares, which his host's young daughter rushed to return to him.  Rather than taking it, Gerard looked intently at the girl and said, "Keep it.  It will serve you someday."  From that day forward, the youngster preserved the handkerchief as a treasured relic. 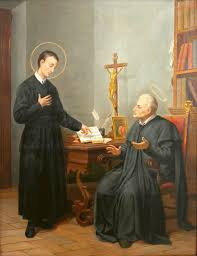 St. Gerard and St. Alphonsus Liguori knew each other
in life and held each other in high regard.
Years later, when the girl had grown and married, and expecting a child, she experienced complications during the birth that threatened both her and the baby's life.  Suddenly remembering Gerard's words, she asked for the handkerchief and laid it over her belly while invoking his intercession.  No sooner had she done so when the pain immediately stopped and the infant was delivered safely.  News spread about the miracle and other pregnant women in the town began borrowing the handkerchief to ensure their own safe deliveries.  It was this specific event that directly led the Faithful to popularly acclaim Gerard as the Patron of Expectant Mothers.
I could go on and on about Gerard's reported miracles but there's just too many of them to narrate in a single, short blog.  I'll conclude this segment on his wonders by adding that this Saint also multiplied food, walked on water, and raised at least one dead person to life.  So he wasn't just an exceptional reflection of Christ in virtue, but also in miraculous deeds!
Circa 1753, Gerard's irreproachable life was called into question by an event that's often narrated about him.  A certain Neria Caggiano accused the Saint of sexual impropriety with another woman.  Rather than defending himself, Gerard maintained silence in apparent imitation of Christ's meekness and submission to his accusers.  St. Alphonsus Liguori (d. 1787), the founder of the Redemptorists, summoned him to respond to the charges, but because of the Saint's refusal to speak, Alphonsus understably banned him from public ministry and Holy Communion.  For a time, his congregation and admirers treated him with suspicion, to which the Saint also quietly submitted... but he was vindicated not long after when his accuser confessed it had all been a lie.  This unfortunate matter only served to validate Gerard's extraordinary conformity to Christ's life and he was held in higher esteem than before, including by St Alphonsus.
Our Saint's death came on October 16, 1755, in Materdomini, after succumbing to tuberculosis.  He had predicted to his superiors and his physician six months prior that he would contract the disease and die from it on the exact day he expired.  But Gerard's wonders did not cease with his passing - healings were reported at his tomb, which was later opened and his bones discovered to be oozing an oily manna that also effected cures!
St. Gerard Majella was declared a Saint in 1904 by Pope St. Pius X.  His relics are conserved in a spectacular sanctuary dedicated to his honor in Materdomini.  May he pray for our personal needs and the needs of the entire Church. 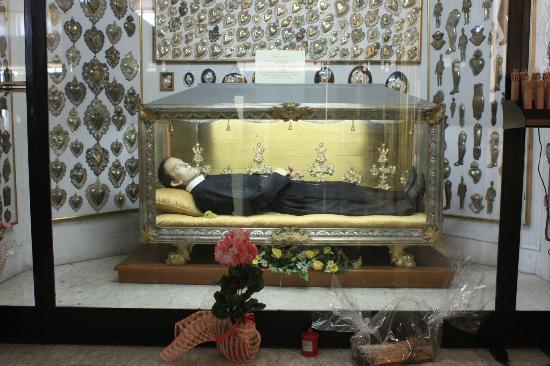 The tomb-shrine of St. Gerard in his dedicated sanctuary at Materdomini, Italy.
Note the many plaques on the wall testifying to the Saint's effective intercession.
Peter @ Guadalupe House Ministry, Honolulu No comments: