Monthly Messages from the Queen of Peace of Medjugorje: June 2019

Our Lady's Monthly Message to the World on June 25th:
"Dear children! I am thanking God for each of you. In a special way, little children, thank you for having responded to my call. I am preparing you for the new times that you may be firm in faith and persevering in prayer, so that the Holy Spirit may work through you and renew the face of the earth. I am praying with you for peace which is the most precious gift, even though Satan wants war and hatred. You, little children, be my extended hands and proudly go with God. Thank you for having responded to my call."

Our Lady's Special Message to Mirjana Dragicevic-Soldo on June 2nd:
"Dear children, only a pure and an open heart will make it such that you may truly come to know my Son and that all those who do not know His love may come to know it through you. Only love will make you comprehend that it is stronger than death because true love conquered death and made it so that death not exist. My children, forgiveness is the most exalted form of love. You, as apostles of my love, must pray that you be strong in spirit and that you could comprehend and forgive. You, apostles of my love, by understanding and forgiveness, are giving an example of love and mercy. To be able to comprehend and forgive is a gift for which it is necessary to pray, and to nurture it. By forgiveness you are showing that you know how to love. Just look, my children, how the Heavenly Father loves you with a great love, with understanding, forgiveness and justice - how He gives me, the Mother of your hearts, to you. And here I am among you to bless you with a motherly blessing, to call you to prayer, to fasting - to tell you to believe, to hope, to forgive, to pray for your shepherds, and above all to love without limits. My children, follow me. My way is the way of peace and love, the way of my Son. It is the way that leads to the triumph of my heart.  Thank you."

I had to share this - it's like a postcard from Heaven and I took it after I left work earlier this evening.  I was struck by how exceptionally beautiful the sky was as sunset approached.  The sight took my breath away and in my head I said to myself, "Lord, this is your doing - thank you!", before snapping this photo. 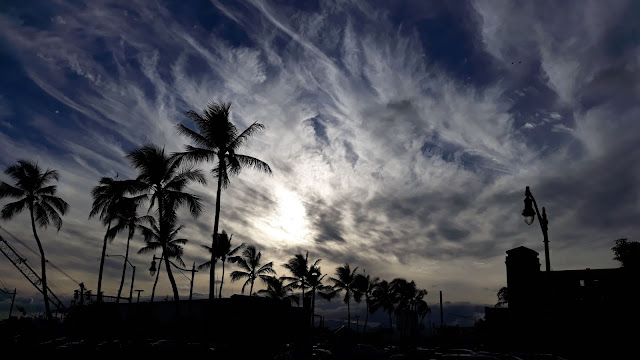 As one can clearly see, the view above was spectacular - an art masterpiece from God's creative and omnipotent genius, as I like to think of it... and, with this particular design, I later discovered, to my delight, that the Lord had actually taken the care to "sign" it...

Look closely at the center, just above the palm trees - there's a clear, luminous white HEART! That's God's signature right there on His divine handiwork; His way of signing this postcard-perfect scene as... 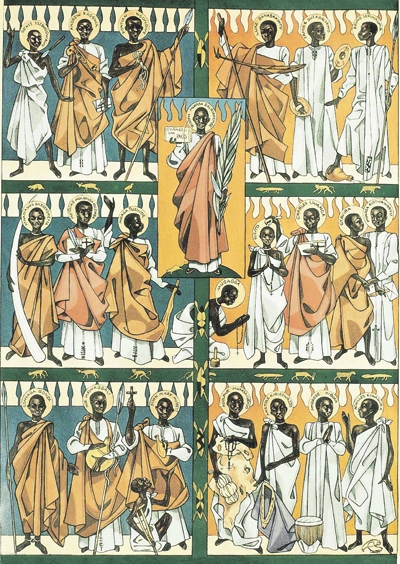 Between November 1885 and January 1887, twenty-two layman from Uganda, Africa - Catholic converts of the White Fathers Congregation from France - lost their lives in witness of the Faith.**  They were mostly youthful pages in the service of Mwanga II, the ruling "Kubaka", or native king, who ordered the brutal executions of his Christian courtiers.  To make a long backstory short, Mwanga II at first welcomed the White Fathers to his realm, but quickly came to change his mind as their influence grew among the people, especially with the converted chiefs.  Furthermore, the ruler reportedly indulged a perverse attraction towards his pages and the Christian head of the pages - Joseph Mukasa - went out of his way to shelter the Christian boys under his charge from the king's sexual advances, infuriating the Kubaka.


"A Christian who gives his life for God is not afraid to die."

~ St. Joseph Mukasa to his executioners

Fueled by the scheming of a pagan Prime Minister, Mwanga's paranoia and resentment towards Christians grew to the point where he ordered the execution of Joseph Mukasa over the devout man's meddling in his sexual trysts.  Joseph was beheaded and his body cremated on November 15, 1885.  Before his sentence was carried out, he was heard to forgive his king and urged him to repent. 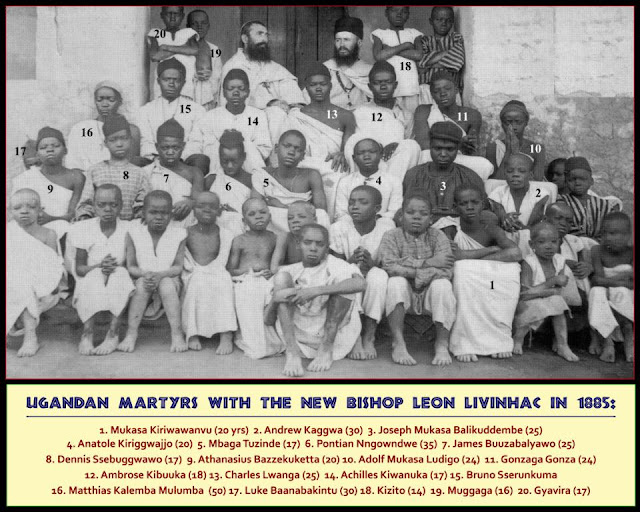 A rare photo showing 20 of the 22 Martyrs of Uganda.

Things were relatively calm for the next 6 months before the Christian persecution erupted on a larger scale in May 1886.  This time around, it was the Christian page, Charles Lwanga, who incurred the wrath of the king for having taken up the role of mentor and protector of the Christian pages left vacant by the death of Joseph Mukasa.

Exasperated, Mwanga rounded up the pages and ordered those "who pray" to identify themselves.  Charles was the first to do so and was followed by the other Christians.  When all refused to give up their faith in Jesus Christ they were immediately bound and made to undergo a death-march to a place of execution in Namugongo (17 miles away).  Due to sheer fatigue and/or physical injuries sustained during their long trek, a few did not reach their final destination and were killed along the way.  Those who did manage to complete the journey were eventually burned to death in a large bonfire. 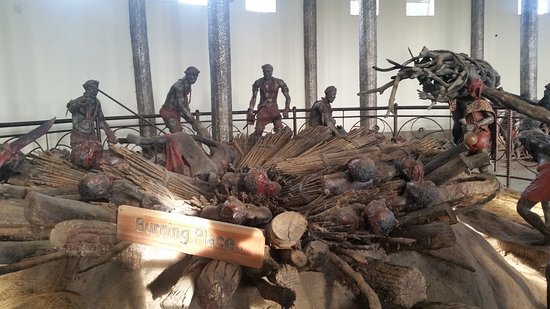 A photo from Tripadvisor showing a display at the Ugandan Martyrs Shrine in Namungongo, Uganda.
It depicts the manner of death the martyrs suffered.

All the martyrs met their deaths with a heavenly calm and dignity that impressed witnesses, including the executioners who remarked they never saw men as courageous as these martyrs.  Even before the fire was lit, the collective sound of prayer could be heard from the heap of bodies piled together in a circle; words of encouragement towards each other could also be heard.

"Do the job you were ordered to do by the king - kill me.
I have decided never to deny my religion, but to die for
Christ who died for me.”

~ Words of St. Mbaaga Tuzinde to his uncle,
one of the executioners


Because of the lead role he played among the martyrs, Charles Lwanga was singled-out for an exceptionally cruel death from a controlled, slow-burning fire.  When he was about to be separated from his companions, he shouted to them with conviction, "I will join you very soon in Heaven!"  His last word before he succumbed to the torture was, "Katonda (My God)". 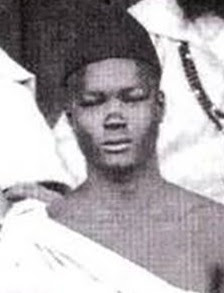 St. Charles Lwanga was the unofficial leader of the band of Ugandan
royal pages who courageously died for Christ in May 1886.

The last martyr to die was James-Mary Muzeeyi, who was beheaded on January 27, 1887.

The 22 Martyrs of Uganda were collectively Beatified in 1920 and Canonized in October 1964.  May they pray for us from their places in Heaven and protect the Church against its enemies here on earth, especially the suffering Christians in Africa. 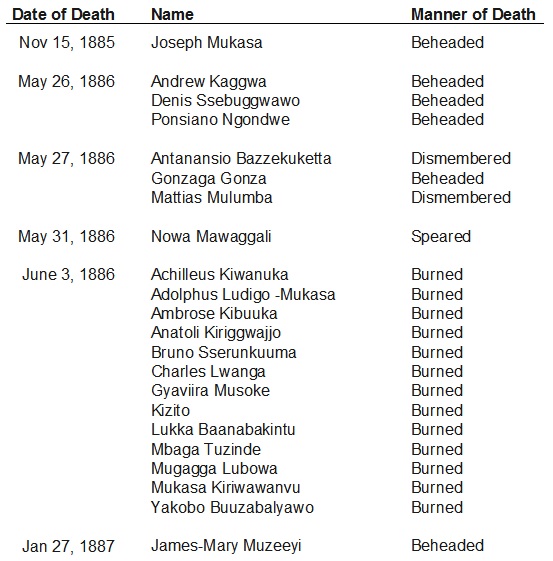 ** NOTE:  There were actually 45 Christians who lost their lives during this period of persecution in Uganda - 22 Catholics and 23 Anglicans.  This blog speaks only of those Canonized by the Catholic Church.