Monthly Message of the Queen of Peace of Medjugorje: August 25th, 2020

"Dear children! This is a time of grace. I am with you and anew am calling you, little children: return to God and to prayer until prayer will be a joy for you. Little children, you do not have a future or peace until your life begins with a personal conversion and a change to the good. Evil will cease and peace will begin to reign in your hearts and in the world. Therefore, little children, pray, pray, pray. I am with you and intercede before my Son Jesus for each of you.  Thank you for having responded to my call."
Peter @ Guadalupe House Ministry, Honolulu No comments: 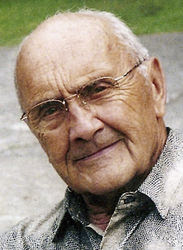 The Servant of God
Irving C. Houle
Irving Houle, also known under the pseudonym "Francis", was an American layman; a devoted husband and father; a faithful Catholic; a renowned healer; and a victim-soul who bore the wounds of Christ on his hands and mystically suffered the Passion. He was born in Michigan on December 27th, 1925, where he also died fairly recently in 2009. Houle's life is currently being reviewed by the Church for possible Sainthood.
According to the official promoters of his Cause for Canonization, Irving was born to a large devout Catholic family from Wilson, Michigan. As a 6-year-old youngster he had a near-fatal accident after he was thrown off a galloping horse, causing him broken ribs and a punctured lung. An aunt, who was a Franciscan nun, was enlisted to pray for the boy who subsequently made a remarkable recovery.  Irving later reported to his mother that he witnessed the appearance of a "beautiful man" dressed in a "white bathrobe" during the night, who blessed the badly injured child (later confirmed to be Jesus by Houle).
Perhaps because of his experience, Irving developed a prayerful and penitential spirit from his early youth; a strong attraction to Mass and his family's routine prayer time practiced in the Houle home.
During his teen years Irving's family relocated to Escanaba, Michigan, where he attended the local high school. He occupied his time with sports, as well as, daily Mass attendance. After graduating in 1942, he enlisted in the Army and fought in World War II, after which he married his wife, Gail, in November 1948; their marriage lasted for 60 years (until Irving's passing) and produced five children.
To support his growing family, Irving held jobs in retail, manufacturing, and finally as a plant manager at Engineered Machine Products. Relatives and colleagues recall his dedication to family, his kindness, sense of humor, and consistent practice of the Catholic Faith. Houle was a member of the Knights of Columbus and, after he retired, was a daily Communicant; prayed the Rosary and Divine Mercy Chaplet daily; and frequently practiced the Stations of the Cross. Otherwise, life was relatively routine and normal for Irving... until Lent of 1993. 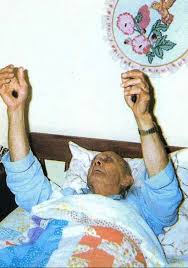 Irving, in ecstasy during one of his nightly sufferings
of the Passion of Christ.
On Good Friday, 1993, Irving's life took an amazing turn - he was revisited by the Lord who commissioned him to "touch my children". At the same time, the Stigmata in his hands developed, which caused him constant pain (only these wounds remained visible while he also felt the pain of the others). Soon after receiving the sacred wounds, Irving began experiencing the Passion of Christ every night from midnight to 3:00AM for the last 16 years of his life. It was later revealed to him that these hours were the time of the day when sin was most prevalent and his recurring ordeal was in atonement for transgressions and for the conversion of sinners. Apparitions and messages from the Blessed Virgin Mary were also reported to have occurred with this mystic.
"You will continue to suffer.  This is all for
conversions; many, many will be saved."
- Words of Jesus to Irving
In addition to the nightly expiatory sufferings, Houle fulfilled the Lord's request to him by praying over thousands of people during special prayer services and other events permitted by his local bishop. It was often reported that Irving's hands emanated a strong warmth and floral scent whenever he prayed and laid hands on people, and countless cures and notable spiritual conversions resulted. It should also be emphasized that he never took payment for his services and he deflected praises directed to him by saying such words as “Jesus is the one who heals”.
"Your hands are my Son’s hands.  Continue to
evangelize.  Bring back many to the Sacrament of
Penance and to celebrate the Eucharist."
- Words of Our Lady to Irving
Irving Houle died at Marquette General Hospital on January 3rd, 2009; he was 83-years-old. His Cause for Canonization was opened by the Diocese of Marquette in November 2018, which designates this American layman as a Servant of God. Upon learning the news, Gail Houle paid tribute to her late husband, saying: "Irving is my saint and this is well deserved." 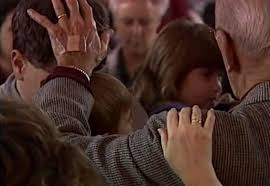 Irving Houle praying and laying hands on the Faithful.
Note the band-aids covering a hand wound.
For those interested in learning more about the life and spirituality of Irving Houle... or how to support his Cause for Canonization, click here to be redirected to the official website of the promoters of his Cause.
Bro. Irving, pray for us and
for all America!
Peter @ Guadalupe House Ministry, Honolulu No comments: