Monthly Message of the Queen of Peace of Medjugorje: September 25th, 2020

"Dear children! I am with you for so long because God is great in His love and in my presence. I am calling you, little children: return to God and to prayer. May the measure of your [way of] living be love and do not forget, little children, that prayer and fasting work miracles in you and around you. May everything you do be for the glory of God, and then Heaven will fill your heart with joy and you will feel that God loves you and is sending me to save you and the earth on which you live. Thank you for having responded to my call."
Peter @ Guadalupe House Ministry, Honolulu No comments:

With the recent mainstream release of the movie, "Fatima", this past August 28th, there seems to be a providential reemphasis on the 1917 Marian apparitions in Fatima, Portugal.  I must admit that I didn't wholeheartedly enjoy the movie because of how the Blessed Virgin's apparitions were inaccurately portrayed, but I was happy that the movie could at least lead those new to the Fatima Events to possibly want to know more about them... to want to learn the message in detail, which continues to be important and relevant even in our own times. (Click here for more info on the Fatima movie)
With the above being stated, I'm sharing another usual experience I recently had that I believe has a direct connection to the Fatima Message.  In short, on the morning of Wednesday, 9/16/2020, during a time of intermittent personal prayer and spiritual reflection, I was surprised by another visual manifestation of our Holy Mother in the form of her figure in the sky above my home - I immediately recognized Our Lady of Fatima!
After observing the image for several moments, I fumbled through unlocking my cellphone and managed to snap a photo before Our Lady faded from view - see below. 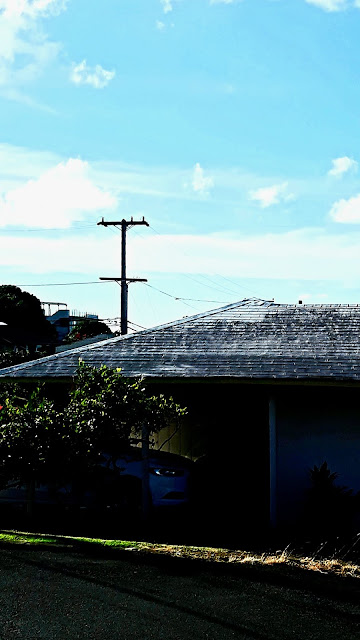 The figure of the Blessed Virgin
can be seen in the sky above the roof
(outlined in the photo below). 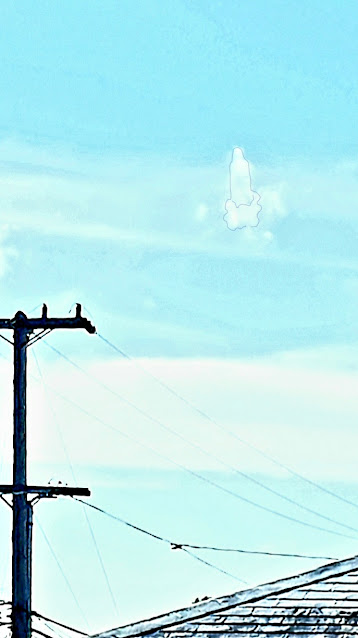 I then prayed for discernment concerning this occurrence and I somehow knew for certain that Our Lady was silently drawing attention to the message she delivered at Fatima - that we live it.  In essence, if we aren't already doing it, she is encouraging all of us to start practicing these now...
For Our Lady to manifest herself in such an extraordinary manner, to someone as unworthy as me, I also believe that there's a sense of urgency to it all, which is why I decided to act and post about this experience; that, if I failed to share about it, I'd be disobedient and irresponsible, especially since our Blessed Mother also prophesied at Fatima dire consequences for the world if we failed to heed her words. 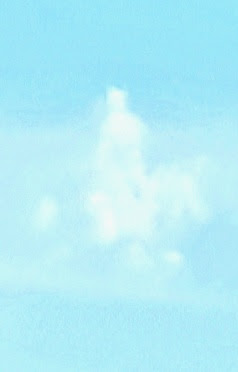 A closer view of Our Lady's figure, cropped
from one of the above photos.
So I share and let readers decide, but my hope is that more people will respond positively to the message of Fatima.  Research the message online, if needed... or watch the new Fatima movie (or see "The 13th Day" movie instead) - one may just discover that the message is that important and critical.  It simply has to be if Mother Mary took the time to visit...
Our Lady of Fatima, pray for us!
Peter @ Guadalupe House Ministry, Honolulu No comments:

Saint of the Month - September 2020: Blessed Maria Maddalena of the Passion 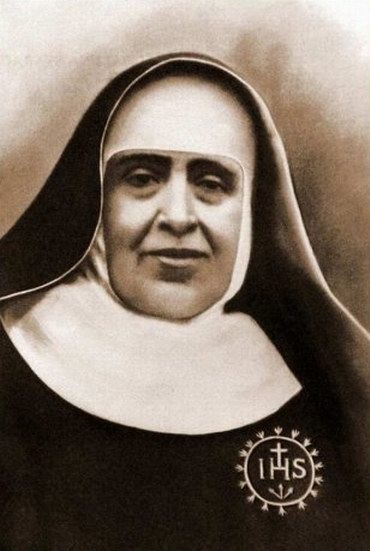 Bl. Maria Maddalena of the Passion
A Woman of Prayer & Action ~ Memorial: September 5th
September's Saint of the Month was born Costanza Starace on September 5, 1845, in the seaside commune of Castellammare di Stabia in Naples, Italy.  She was the eldest of six children born to an affluent family in the region.  Apparently, deeply pious from a young age, she entered a certain monastery at just 12-years-old but was discharged two years later due to chronic illness.  Her health remained so poor it prevented her from ever resuming a cloistered religious vocation.
Undeterred by the setback, Costanza continued to live a life consecrated to God as a “home nun”, which was somewhat common during that time in Italy among highly devout laywomen.  She pronounced private vows of perpetual chastity and from her family home she prayed, sacrificed, and performed works of charity amongst her neighbors. 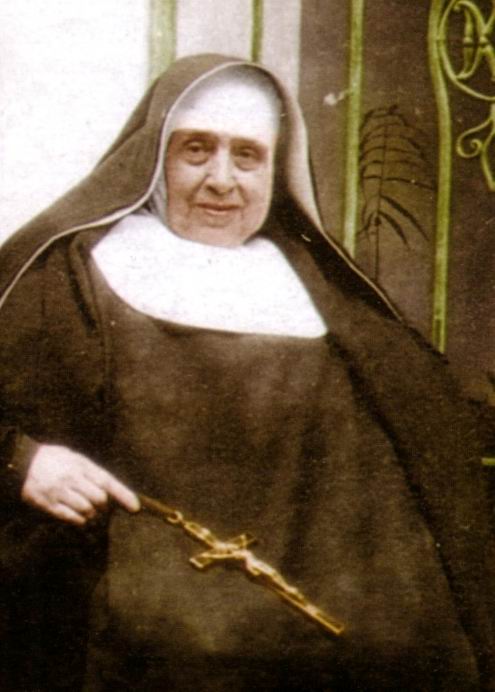 Another photo of Bl. Maria Maddalena of
the Passion, Foundress
Costanza eventually affiliated herself with the Servants of Mary (the “Servites”) in 1865 by becoming a tertiary and was given special permission by the local bishop - Francesco Saverio Petagna - to wear the Order’s full habit; she was professed into the tertiary order in June 1867.  As her personal holiness continued to impress others, she was elected to lead the Pious Union of the Daughters of Mary, a Servite-affiliated association dedicated to Christian education.  With the paternal support of her bishop, Costanza expanded the group’s work to include sheltering women and children in distress, caring for orphans, and ministering to the infirm.
By 1871, Constanza’s initiatives with the pious union were so successful, Bishop Petagna, appointed her as the superior of a congregation she was inspired to establish - the Compassionist Sisters Servants of Mary.  With the birth of this new ministry, Costanza became Mother Maria Maddalena of the Passion.  Despite continuing health issues, the untiring foundress skillfully guided her spiritual daughters, via her wise counsel and active faith example.  Working together, their apostolate soon spread beyond Castellammare di Stabia into neighboring regions in southern Italy. 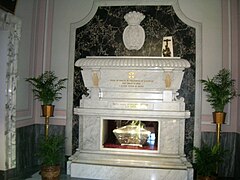 The tomb-Shrine of Bl. Maria Maddalena in the chapel of
her congregation in Castellammare di Stabia.
Already considered a saint by the general public during her lifetime, it was not widely known that Mo. Maria Maddalena was also the recipient of extraordinary signal graces.  The foundress was, in fact, a genuine mystic-soul who experienced ecstasies and bore on her body the wounds of the Sacred Stigmata, which periodically opened and bled on the Fridays of Lent.  On several occasions, she was also the target of diabolic physical attacks in apparent retaliation for her sanctity and resulting good works.  In her humility, Mo. Maria Maddalena attempted to hide the unusual phenomena that surrounded her but to no avail, especially when it came to the stigmatic sufferings; her closest associates testified to the truth of her mystical gifts.
After an illustrious life spent in heroic faith and generosity, this Italian foundress entered into her eternal reward on December 13th, 1921 in her home town.  The Church officially recognized her exceptional holiness during a beatification ceremony held in the co-Cathedral of Castellammare di Stabia on April 15, 2003.  May the Lord see fit to grant the Faithful her speedy Canonization – Bl. Maria Maddalena of the Passion, pray for us!
"When you cannot speak to man of God,
speak to God of man."
~ Words of Bl. Maria Maddalena
Peter @ Guadalupe House Ministry, Honolulu No comments: