Monthly Messages from the Queen of Peace of Medjugorje: December 2019

Our Lady's Monthly Message to the World on December 25th (given through Marija):
“Dear children! I am carrying my Son Jesus to you, for Him to bless you and reveal to you His love, which comes from Heaven. Your heart yearns for peace, of which there is less and less on earth. That is why people are far from God and souls are sick and heading towards spiritual death. I am with you, little children, to lead you on this way of salvation to which God calls you.  Thank you for having responded to my call.”

Our Lady's Special Message on December 25th (given during Jakov's annual Christmas Day apparition):
“Dear children, today, on this day of grace, in a special way I am calling you to open your hearts and to implore Jesus to strengthen your faith. Children, through prayer with the heart, faith and works you will come to know what it means to live a sincere Christian life. Often times, children, darkness, pain and crosses overwhelm your hearts. Do not waver in faith and ask 'why' because you think that you are alone and abandoned. Instead, open your hearts, pray and believe firmly and then your heart will feel God's nearness and that God never abandons you – that He is beside you at every moment. Through prayer and faith, God will answer your every 'why' and transform your every pain, darkness and cross into light.  Thank you.”

Our Lady's Special Message to Mirjana Dragicevic-Soldo on December 2nd:
“Dear children, as I am looking at you who love my Son, my heart is being filled with tenderness. I am blessing you with a motherly blessing. With a motherly blessing, I am also blessing your shepherds - you who speak the words of my Son, who bless with His hands and who love Him so much that you are ready to make every sacrifice for Him with joy. You are following Him, who was the first shepherd, the first missionary. My children, apostles of my love, to live and work for others, for all those whom you love through my Son, is the joy and comfort of earthly life. If through prayer, love and sacrifice the Kingdom of God is in your hearts, then your life is joyful and bright. Among those who love my Son and who love each other through Him, words are not necessary. A gaze is sufficient for the unspoken words and unexpressed feelings to be heard. There where love reigns, time no longer counts. We are with you. My Son knows you and loves you. Love is that which brings you to me, and through that love I will come to you and speak to you of the works of salvation. I desire for all of my children to have faith and to feel my motherly love which leads them to Jesus. Therefore, you, my children, wherever you go, illuminate with love and faith as apostles of love.  Thank you.” 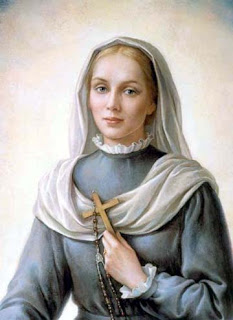 Our Saint this month - Virginia Centurione Bracelli - was a Genoese noblewoman born on April 2, 1587, to an elite and distinguished family. She had the good fortune of growing up in a faith-filled home so she was exposed to piety from early childhood; even confiding to her mother that she wanted to enter a monastery. But before she could realize her desire, Virginia’s mother died and her father arranged an advantageous marriage for her with the son of another prominent family in Genoa.

Gaspare Bracelli, the intended groom, was the heir to a large fortune, but his personality was a poor match for the devout Virginia – he was worldly and careless; given over to the pleasures of this world. Virginia wept when she learned what her father had done, but out of obedience to him, she reluctantly married Gaspare on January 7, 1602... and it was a rocky union from the start.

Two daughters were quickly born to the couple, which brought a measure of joy and consolation to Virginia… but within 5 years of being together, Gaspare’s wayward lifestyle reduced him to serious illness. Despite his failings as a husband, his loyal wife lovingly cared for him, which effected the man’s conversion before his untimely death on June 13, 1607. On the very same day she was widowed, the 20-year-old Virginia made a private vow of chastity and resisted any further efforts made by her father to remarry her. Instead, she focused all her energy in raising her young daughters and on living a life of active faith and charity "to serve God through the poor".

Virginia, at first, used the wealth at her disposal to assist the needy in Genoa by distributing food and clothing to the poor but, after her daughters were grown and married, her ministry of service went into overdrive - she founded schools; established care homes for abandoned children and the elderly; and lobbied for establishing public devotions to Our Lady and the 40 Hours Devotion to the Holy Eucharist.

In late 1624, the invasion of Western Liguria by the Duke of Savoy saw Genoa flooded by a large number of refugees, and Virginia rose to the challenge; adopting several young girls - victims of the war - and founding a pious association known as the Hundred Ladies of Mercy, Protectors of the Poor of Jesus Christ, comprised of other women who were inspired by the founder's charitable works... and, when the plague and a famine hit her city in 1630, Virginia turned a former convent into a hospital where she and her companions cared for over 300 patients!

Given all the good works she accomplished, it's not surprising Virginia was highly regarded in her lifetime. People sought her counsel and she became Genoa's resident peacemaker, especially among the constantly feuding noble families. In addition, the Lord bestowed on his faithful servant extraordinary spiritual gifts, which included private revelations, ecstasies, and visions. The beloved foundress died at the age of 64 on December 15, 1651; her last recorded words were, "My heart is ready, Lord."

Virginia Centurione Bracelli was declared a Saint by Pope John Paul II in May 2003. Her body, discovered completely incorrupt in 1801, is venerated in the chapel of the mother house of the Sisters of Our Lady of Refuge in Mount Calvary in Genoa, Italy.