Monthly Messages from the Queen of Peace of Medjugorje: May 2018 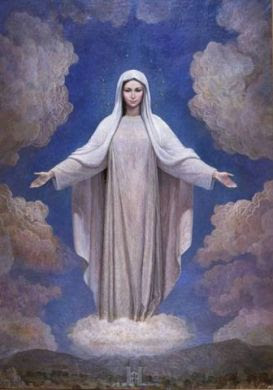 Our Lady's Monthly Message to the World on May 25th:

“Dear children!  In this peaceless time, I am calling you to have more trust in God who is your Father in Heaven and who has sent me to lead you to Him.  You, open your hearts to the gifts which He desires to give you and, in the silence of your heart, adore my Son Jesus who has given His life so that you may live in eternity - where He desires to lead you.  May your hope be the joy of a meeting with the Most High in every day life.  Therefore, I am calling you: do not neglect prayer because prayer works miracles.  Thank you for having responded to my call.”

Our Lady's Special Message to Mirjana Dragicevic-Soldo on May 2nd:
“Dear children, all that my Son, who is the light of love, has done and does, He has done out of love.  Also you, my children, when you live in love and love your neighbors, you are doing the will of my Son.  Apostles of my love, make yourselves little; open your pure hearts to my Son so that He can work through you.  With the help of faith, be filled with love.  But, my children, do not forget that the Eucharist is the heart of faith.  This is my Son who feeds you with His Body and strengthens you with His Blood.  This is a miracle of love: my Son who always comes anew, alive, to bring life back to souls.  My children, by living in love you are doing the will of my Son and He lives in you.  My children, my motherly desire is for you to always love Him more, because He is calling you with His love.  He is giving you love so that you may spread it to all those around you.  As a mother, through His love, I am with you to speak the words of love and hope to you—to speak to you the eternal words that are victorious over time and death—so as to call you to be my apostles of love.  Thank you.”

Saint of the Month - May 2018: Blessed Marie Celine of the Presentation 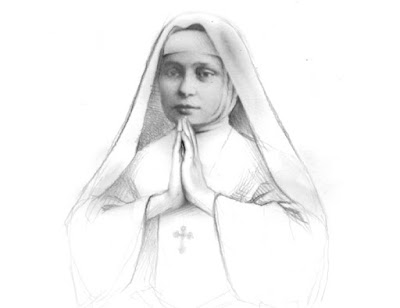 Bl. Marie Celine of the Presentation
"Saint of the Perfumes" ~ Memorial: May 30th

St. Jacinta Marto of Fatima died at aged 9 and her brother, St. Francisco Marto, died at aged 10; St. Maria Goretti was martyred at aged 11; St. Dominic Savio peacefully passed at aged 14; and St. Rose of Viterbo was only about 17 when her soul flew off to claim its eternal reward.  There are still more examples of young lives of extraordinary virtue and it all goes to show that our children and youth, despite their seeming immaturity, have a tremendous capacity to respond to the promptings of the Holy Spirit; ascending to great heights of sanctity with the help of His grace.  Joining the ranks of these young models of holiness is this month's featured Saint of the Month - Bl. Marie Celine of the Presentation.  She died at the tender age of 19.

Born, Jeanne-Germaine Castang ("Jeanne"), on May 23, 1878, she was the fifth child out of eleven born to an impoverished family from Nojals-et-Clotte, France.  At age 4 she came down with polio, which left her with chronic pain and a festering sore in her left leg and foot, that eventually necessitated an orthopedic operation in 1891.  Although the procedure alleviated the pain she felt, she walked with a limp for the rest of her brief life.

In addition to being sickly, her family was also troubled with serious financial issues. After her father's store business failed, their situation became so dire, they were forced to live in a run-down barn.  To keep the family from starving, Jeanne resorted to begging for scraps from their neighbors with a small wheelbarrow, despite the pain she suffered while walking.  Her father ended up moving to nearby Bordeaux without the family in order to find a job, and the family's situation was somewhat improved; the rest of the Castangs later joined him there. 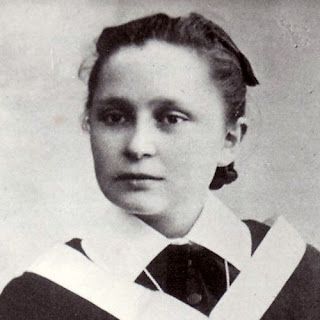 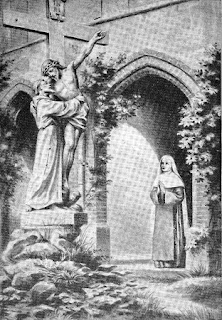 An actual photograph of the young Bl. Marie Celine of the Presentation and a print
depicting her as a postulant in the Poor Clare Monastery of Talence, France.

Other troubles in Jeanne's life included the untimely death of her pious mother in December 1892, and the death of five siblings from illness or malnutrition that followed soon after.  One of those who passed was a brother who suffered and died from tuberculosis.  In the process of caring for him, Jeanne contracted the dreaded disease, which later resulted in her own death.

Despite all the misfortunes she endured in her primary years, our young heroine was reported to have been amiable, deeply pious, and having an unusual attraction to the Blessed Sacrament.  She learned this piety from the example of her mother and while being a student at the local school run by the Sisters of St. Joseph.  From early 1892 to 1897, she boarded with the Sisters of Nazareth in Bordeaux where she had the joy of receiving her First Holy Communion and Confirmation.  Witnesses testified that so great was Jeanne's love for our hidden Lord, she wept abundant tears of happiness as she received the Eucharist on June 16, 1892.

Drawn to spirituality, Jeanne had expressed on more than one occasion her desire to enter into religious life.  She had actually applied for admission with her former teachers - the Sisters of St. Joseph - where her older sister was already a nun, but was refused because of her health issues. A later visit to the Poor Clare monastery in Talence, near Bordeaux, providentially set her on course to becoming a member of the Franciscan spiritual family instead. There, the superior of the community was so impressed with Jeanne's candor and faith, that she was accepted into the monastery despite her poor health.  So she entered in June 1896 and was clothed in the Poor Clare habit in November of the same year.  Her name in religion was Sr. Marie Celine of the Presentation.

"I am determined to be a violet of humility, a rose of charity, and a lily of purity for Jesus."

~ Words of Bl. Marie Celine of the Presentation

The new postulant was distinguished by her exceptional humility, obedience, joy, and willingness to serve others. Patience in suffering can also be added to her list of virtues, as despite the discomforts of her physical handicap, she participated in the active routine of the monastery without any complaints.  To top it all off, the tuberculosis she contracted earlier resurfaced in the monastery and began taking a toll on her frail body.  Her health quickly began deteriorating and, once the symptoms became obvious to her superiors, it was too late to do anything for her.  She was soon in and out of the infirmary.

It was in the last few months of Sr. Marie Celine's life that her holiness began to manifest with great splendor.  From her very first day in the monastery, besides her evident piety, there were already little signs that hinted of the young postulant's advanced level of sanctity.  For example, she seemed to receive special help with her chores from angelic hands, and there were deep states of prayer that drew her up into another world... but most remarkable was the continuous aroma of roses that began emanating from her person fourteen days prior to her death, which filled the infirmary and the adjacent halls with its delightful scent.  The other Sisters simply couldn't ignore it. 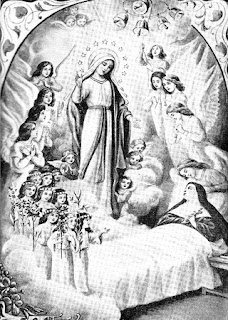 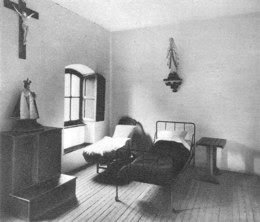 A print depicting an apparition of the Blessed Virgin to Bl. Marie Celine and a photo
of the infirmary and the bed in the monastery on which she died.

Seeing that there was obviously no hope of recovery for her, Sr. Marie Celine was allowed to profess her final vows on her deathbed, in articulo mortis.  Afterwards, the dying nun claimed a splendid apparition of the Holy Mother, who appeared accompanied by a procession of blessed souls.  The heavenly group came to forewarn her of her approaching entrance into Paradise, which occurred on May 30, 1897.  Even in death, the odor of sanctity still clung to her virginal remains leaving a lasting impression on the community.

After her passing, the Poor Clares held Sr. Marie Celine's memory with sisterly affection and high regard and, in return, the deceased nun often confirmed her continuing spiritual presence with them through the manifestation of the same mysterious scent of flowers that surrounded her in life.  Thus, the Sisters came to nickname their little patroness as the Saint of the Perfumes.

Sr. Marie Celine of the Presentation was declared Blessed by the Church on September 16, 2007.  May the Lord see fit to grant us the joy of her canonization in the not-so-distant future.  Bl. Marie Celine, pray for us!

A Reflection
"... and walk in love, just as Christ also loved you and gave Himself up for us, an offering and a sacrifice to God as a fragrant aroma." ~ Ephesians 5:2

A Short Prayer
Lord, may our faith and love for you be like that of Bl. Marie Celine; ascending from our hearts up to your Heavenly Throne as a fragrance most pleasing to you.  Amen.