Monthly Message of the Queen of Peace of Medjugorje: March 25th, 2021

The Monthly Message:
“Dear children!  Also today I am with you to tell you: Little children, whoever prays does not fear the future and does not lose hope.  You are chosen to carry joy and peace, because you are mine.  I have come here with the name ‘Queen of Peace’ because the devil wants peacelessness and war, he wants to fill your heart with fear of the future - but the future is God’s.  That is why, be humble and pray, and surrender everything into the hands of the Most High Who created you.  Thank you for having responded to my call.”
A special message received by Mirjana Dragicevic-Soldo during her annual apparition on March 18th, 2021:
"Dear children, in a motherly way I am calling you to return to the joy and the truth of the Gospel, to return to the love of my Son - because He is waiting for you with open arms; that everything you do in life you do with my Son, with love; that it may be blessed for you; so that your spirituality may be internal, and not just external.  Only in that way will you be humble, generous, filled with love and joyful; and my motherly heart will rejoice with you.  Thank you."
Peter @ Guadalupe House Ministry, Honolulu No comments:

It's been a little over a year since this ministry conducted a speaking presentation. Due to this horrible pandemic, the couple of presentations I had scheduled in 2020 were understandably canceled. However, with the recent decline of new Covid-19 infections on Oahu, our mayor lessened restrictions... and I was again able to spotlight Saints during a presentation this morning for coordinators and participants of my parish's R.C.I.A. Program. It felt good; for a bit it seemed almost as though the world was back to normal again.  At least for me. 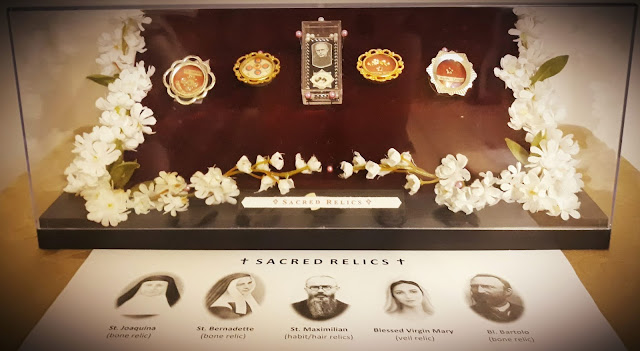 The five relics that were presented for veneration at today's presentation.
Of course, we all wore face coverings and members of the audience were required to sit several feet apart, except for individuals from the same household.  Plus our Makai Meeting Room is well-ventilated with vertical slots on the wall that allow for the fresh ocean breeze to blow through... so we were relatively safe from infection.  At the end, everything went smoothly and it appeared the presentation was well-received by the group.
I can always tell when certain individuals are particularly inspired and/or touched by the Saints because they'll linger near the makeshift altar of relics for an extended period to pray and pay their respects.  Several people lingered today.
One woman, who appeared visibly moved, even testified to me that she smelled the fragrance of roses during the talk (there were no flowers in the room), which is always a special affirmation that Our Lady and/or the Saints re invisibly with us. 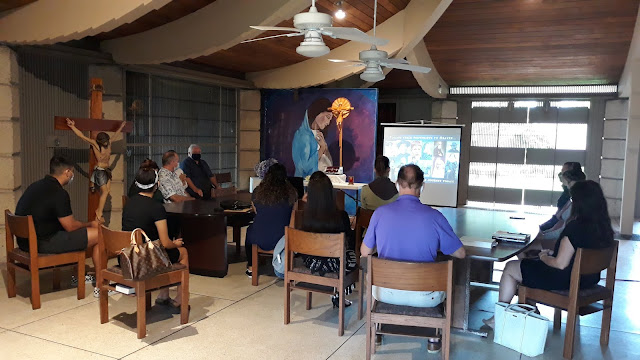 The Saints I featured and whose holy relics I brought today were:
+ Bl. Bartolo Longo (a former satanic priest turned Rosary evangelist and philanthropist of Pompeii, Italy)
+ St. Bernadette Soubirous (the celebrated Marian visionary of Lourdes, France)
+ St. Joaquina Vedruna (a Spanish housewife, mother, widow, mystic, & founder of the Carmelite Sisters of Charity)
+ St. Maximilian Kolbe (a Polish Franciscan priest and "martyr of charity", who gave up his life at Auschwitz to save a family man slated for execution)
... and, lastly, this ministry's treasured relic of the Holy Virgin's veil was also presented for the edification of the participants.  After all, you can't have a talk about Saints and not include Mary,  the Queen of All Saints.
* * *  T E S T I M O N Y  * * *
"... thanks again for your presentation;
it was informative and humbling."
- Maggie
Peter @ Guadalupe House Ministry, Honolulu No comments: 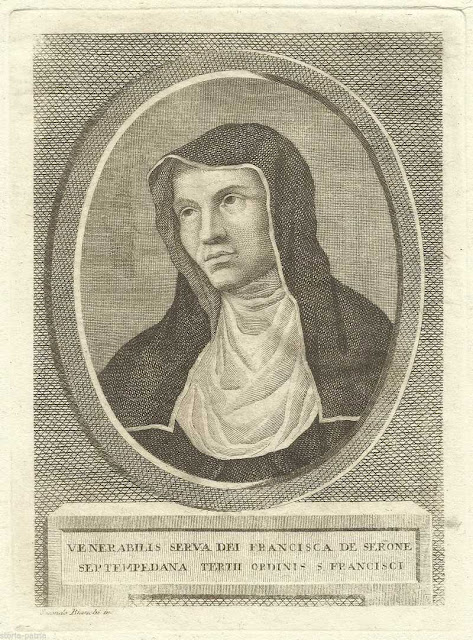 The Servant of God
Francesca del Serrone
Triumphant Over Tragedy
Featured this month is a laywoman whose life is an appropriate Lenten reflection. She was a mystic and "victim soul", who suffered voluntarily on behalf of sinners, in profound union with Jesus Crucified, her Divine Spouse. Born on July 22, 1557, in the village of Serrone, Italy, her name was Francesca Trigli... and from an early age she was no stranger to suffering, which was a hallmark of her incredible, but little-known life.  The inspirational manner in which she consistently chose to respond to her many trials is why this author personally believes she's sainthood-worthy.
At the tender age of just 9-years-old, our Servant of God's father suddenly died and, not long after, her mother passed away, too, through an apparent suicide. The little orphan was then shuffled between the households of an older brother (Antonio), a sister (Ottavia), and a maternal uncle.  Sadly, rather than being lovingly cared for, Francesca was considered a burden by her family, as well as, viewed as an imbecile because she stuttered.  Thus, she was often misjudged and mistreated not just by her relatives but also by their respective communities.
Antonio, in particular, was brutal - he not only neglected her, but often beat her too.  In fact, he once struck Francesca so hard in the face, he knocked out a few of his sister's teeth in the process. Ottavia and the uncle didn't fare much better, as they also failed to adequately care for her and blamed her for every little thing that went wrong in their homes.
On her part, the child Francesca displayed what can only be described as supernatural patience and docility in the face of the abuse she endured.  She had somehow learned about the life of St. Catherine of Siena (d. 1380) and took the Saint as a patroness and role model.  When not burdened by chores, she frequented the local church and spent her spare time in prayer... and what little she managed to have for herself, she shared as alms for the poor.  Additionally, in imitation of her patroness, she took to fasting strictly, as well as wearing a cilice (spiked metal belt) under her clothing; all, in an effort to be closely conformed to Christ Crucified:
Then Jesus told his disciples, "If anyone would come after me,
let him deny himself and take up his cross and follow me."
~ Words of Jesus, Matthew 16:24
Perhaps as a way of coping with the loss of her earthly mother, Francesca also developed a deep attachment to the Blessed Virgin who responded to the child's devotion by actually appearing to her on several occasions.  These heavenly visits provided much-needed consolation and moral support for the poor girl... and it was through Our Lady's intercession the youngster was instantly able to read and write, and the Holy Mother even taught her how to skillfully embroider in order to earn her keep.
Another comfort to Francesca was the charity and guidance of her confessors, who saw the maiden for the chosen soul that she truly was, despite the adverse opinion of others.  It was through the expert direction of these few worthy priests that she became proficient in meditating on the Passion of Christ and in the practice of virtue. They also wisely managed her self-mortifications to protect her from severely injuring herself... and worse yet - from the danger of pride!
Francesca's advancement in sanctity must have been rapid and lofty, because by age 14, she was marked with the Sacred Stigmata in the form of a permanent wound in her side, that represented the Lord's chest-wound.  This mysterious wound bled heavily each Friday when she was said to regularly undergo the full sufferings of Jesus' crucifixion. 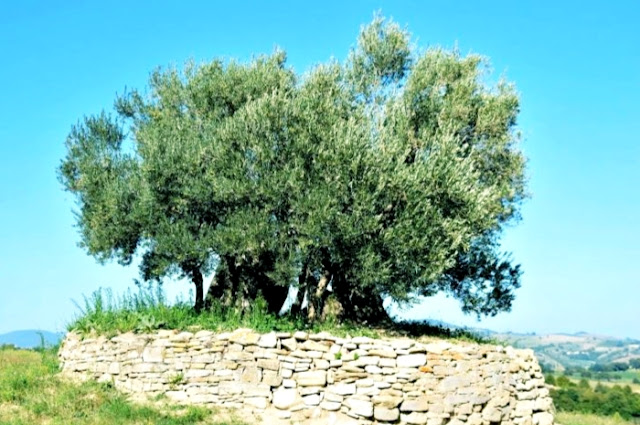 A small grove of olive trees in San Severino Marche where
Francesca often went to pray.
Not surprisingly, talk of Francesca's spiritual gifts soon began circulating in her village and peoples' hostility towards her generally dissipated.  To her annoyance, she became famous as a local "holy woman", and the Faithful came to her for guidance and prayer.  She sought admittance in cloistered convents but was repeatedly denied either because of her poor health or due to misunderstandings over her spiritual experiences, such as the weekly Passion ecstasies and physical attacks from the devil.
During a pilgrimage to Rome in the Jubilee Year of 1575, Francesca was introduced to the mystic-priest - St. Philip Neri (d. 1595) - to whom she wanted to confess and seek advice concerning her vocation.  The Saint, having already heard of her pious reputation, decided to test her humility by first rudely dismissing her.  When she persisted in meeting him, he loudly called her a fraud and a hypocrite to which Francesca responded with her habitual calm and silence.  Her meek demeanor had the effect of favorably impressing St. Philip, who then confessed and counseled her.
Having failed to enter a convent, the Servant of God applied with the Franciscans as a Tertiary and was clothed in their habit on February 22, 1579. By that time she was living in the neighboring town of San Severino Marche, where she continued to work, suffer, and publicly minister to people of all classes; she expressed special care towards orphans, having been one herself.
Francesca del Serrone's holy death occurred on April 7, 1601 - the date she correctly predicted she would die on.  Crowds attended her funeral and many clamored to obtain whatever they could of her habit as relics.  The demand to see her one final time was so great her burial was postponed and her body had to be locked in the sacristy to keep it safe from overzealous admirers.  Evidently, she was so esteemed, Francesca's dying wish to be buried in the Sanctuary of the Madonna dei Lumi - a revered Marian painting that she loved - was honored... and there, her body remains to this day. 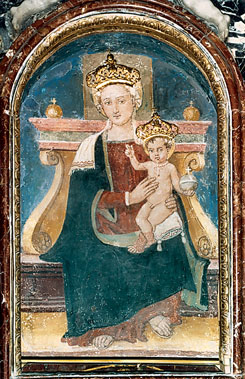 The miracle-working image of the Madonna dei Lumi,
as venerated in San Severino Marche.
On a final note, it needs to be mentioned that by the time of her death at age 43, Francesca had been living solely on the Eucharist for seven years.  Thus, this places her among the ranks of those rare mystics of the Church, who confirmed the true presence of Christ in the consecrated Host through the sublime grace of subsisting only on the Bread of Heaven, in lieu of earthly food and drink.
'not sure why she's not a Saint yet, or at least a Blessed, but please join this ministry in praying for her speedy Canonization.  Francesca del Serrone, pray for us! 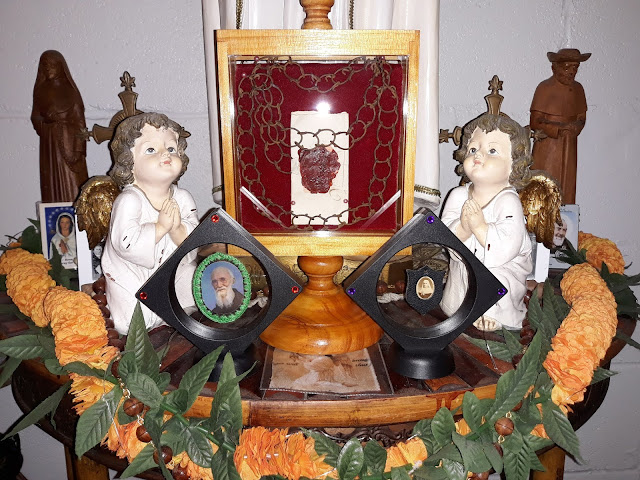 A relic of a cilice reputed to have been used by
Francesca del Serrone (center).
Peter @ Guadalupe House Ministry, Honolulu No comments: