Monthly Messages from the Queen of Peace of Medjugorje: August 2019

Our Lady's Monthly Message to the World on August 25th:
"Dear children! Pray, work and witness with love for the Kingdom of Heaven that it may be good for you here on earth. Little children, God will bless your effort a hundred fold; you will be witnesses among peoples, souls of unbelievers will feel the grace of conversion and Heaven will be grateful for your efforts and sacrifices. Little children, witness with the Rosary in hand that you are mine and decide for holiness. Thank you for having responded to my call."

Our Lady's Special Message to Mirjana Dragicevic-Soldo on August 2nd:
"Dear children, great is the love of my Son. If you were to come to know the greatness of His love, you would never cease to adore and thank Him. He is always alive with you in the Eucharist, because the Eucharist is His Heart. The Eucharist is the heart of faith. He has never left you. Even when you tried to go away from Him, He has not left you. That is why my motherly heart is happy when I watch how you - filled with love - return to Him, when I see that you are coming to Him by the way of reconciliation, love, and hope. My motherly heart knows that when you set out on the way of faith, you are shoots - buds. But along with prayer and fasting you will be fruits, my flowers, apostles of my love; you will be carriers of light and will illuminate all those around you with love and wisdom. My children, as a mother I am imploring you: pray, think, and contemplate. Everything beautiful, painful and joyful that happens to you - all of this makes you grow spiritually, so that my Son may grow in you. My children, surrender yourselves to Him, believe Him, trust in His love, let Him lead you. Let the Eucharist be the place where you will feed your souls, and afterwards, will spread love and truth - will bear witness to my Son.  Thank you."

Saints of the Month - August 2019: The Blessed Martyrs of Nowogrodek


On the morning of Sunday, August 1, 1943, 11 women were driven to the outskirts of their town of Nowogrodek where they were led into the woods.  There, in a clearing, a freshly dug pit awaited them and they were quickly gunned down by their Nazi captors.  So who were these women and what did they do to deserve such a fate?  The answer - they were consecrated souls who were members of the congregation of the Sisters of the Holy Family of Nazareth.  Their heinous crime?  They were executed for being faithful Catholic nuns. 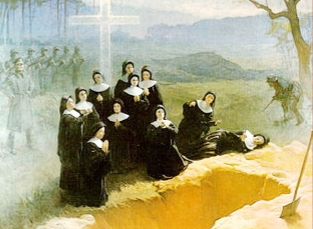 The history of these nuns of Nowogrodek actually dates back to September 1929 with the arrival of two sisters to the town.  Their presence was requested by the local bishop to assist in the spiritual and moral formation of the population.  Rather than being welcomed with open arms, the nuns encountered indifference... but they persevered in the mission they were charged with.  They first taught needlework to the women and girls, before expanding their work to providing catechism classes, tutoring, and other social services to the general population. Slowly, but surely, their reluctant neighbors came to love the nuns and more sisters were brought in to help with the growing ministry.

Things were relatively mundane in Nowogrodek but, beginning in 1939, difficulty and tragedy entered into the lives of its people.  During that year Russia annexed the region making it a socialist republic.  Consequently, the sister's school was confiscated and the nuns were forced to live among private homes dressed as civilians.  The German army invaded two years later, which allowed the sisters to resume their habits and their ministry.  However, the Nazi occupation brought with it a wave of systematic Jewish persecution that resulted in the death of nearly 10,000 Jews living in Nowogrodek.  Poles and priests were targeted next causing further unrest but the visible presence of the Sisters of the Holy Family had the effect of instilling hope and comfort in the townspeople; their convent and the parish church became a beacon of light during dark times.

In mid-July 1943, an additional 120 men were gathered in Nowogrodek for another round of scheduled executions.  The distraught mothers and wives of the captives went to the convent to plead with the nuns to beseech Heaven for the safe return of their men.  Deeply moved, the community was prompted to make a heroic decision - they unanimously decided to spiritually offer their lives in exchange for the lives of the condemned prisoners.  Sr. Maria Stella, the community's superior at the time, met with the chaplain - Fr Aleksander Zienkiewicz - to inform him of the community's intent, which she expressed in the following words:

"My God, if sacrifice of life is needed, accept it from us and spare those
who have families. We are even praying for this intention."

Amazingly, not long after the nuns made their oblation, the death sentence of the Nowogrodek prisoners was somehow commuted to time in labor camps... and some of the men were even released!  It was clear the sisters' offering had been accepted by their Divine Spouse and its fulfillment was at hand. 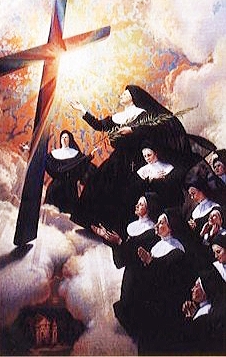 On the evening of July 31, 1943, the religious community was summoned to the headquarters of the Gestapo commander for interrogation.  The nuns had done nothing to provoke the Nazis other than continuing to do what they normally did - Teach, Pray, Serve... and Love.  They were taken into a basement where they were subjected to a hasty mock trial. Sensing their imminent death, the sisters spent the night in a jail cell prostrate in deep prayer before they were loaded into a van the following morning.  They were never heard from again.

The populace suspecting the worse, searched the surrounding area for the sisters - their mass grave was found a few days later in a small grove of birch-pine trees. Fr. Zienkiewicz, the parish priest and chaplain to the convent, revealed the heroic sacrifice of the sisters and became a leading advocate for their Cause for Canonization.  Incidentally, all the 120 prisoners the community offered their lives for reportedly survived the war - thus, the selfless love of a small, prayerful group of religious triumphed over an army of death!

The 11 murdered members of the Sisters of the Holy Family of Nazareth were later beatified on March 5, 2000, by Pope John Paul II.  The names and faces of the Martyrs of Nowogrodek are, as follows: 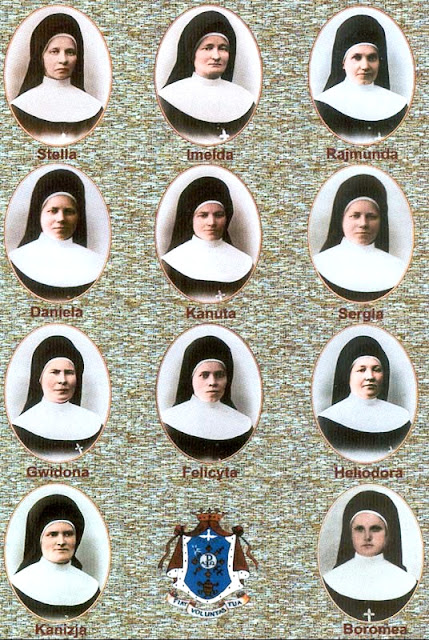 "There is no greater love than to lay down
one’s life for one’s friends."