Monthly Messages from the Queen of Peace of Medjugorje: May 2019 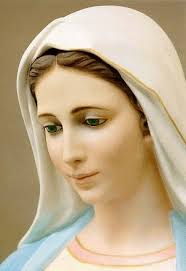 Our Lady, Queen of Peace,
pray for us...


Our Lady's Monthly Message to the World on May 25th:
"Dear children! God permitted me, out of His mercy, to be with you, to instruct and lead you towards the way of conversion. Little children, you are all called to pray with all your heart for the plan of salvation to be realized for you and through you. Be aware, little children, that life is short and eternal life waits for you according to your merit. Therefore, pray, pray, pray to be worthy instruments in God's hands. Thank you for having responded to my call."


Our Lady's Special Message to Mirjana Dragicevic-Soldo on May 2nd:
"Dear children, with a motherly love I am calling you to respond to the great love of my Son, with pure and open hearts, with complete trust. I know the greatness of His love. I carried Him within me, the Host in the heart, the light and the love of the world. My children, also my addressing you is a sign of the love and tenderness of the Heavenly Father - a big smile filled with the love of my Son, a call to eternal life. Out of love, the Blood of my Son was shed for you. That Precious Blood is for your salvation, for eternal life. The Heavenly Father created man for eternal happiness. It is not possible for you who know the love of my Son and who follow Him to die. Life triumphed; my Son is alive. Therefore, my children, apostles of my love, may prayer show you the way and the means of spreading the love of my Son - prayer in the most exalted form. My children, also when you strive to live the words of my Son, you are praying. When you love the people whom you meet, you are spreading the love of my Son. It is love that opens the doors of Paradise. My children, from the beginning, I prayed for the Church. Therefore, I am also calling you, apostles of my love, to pray for the Church and her servants - for those whom my Son called.  Thank you."

Saint of the Month - May 2019: Blessed Maria Bartolomea Bagnesi 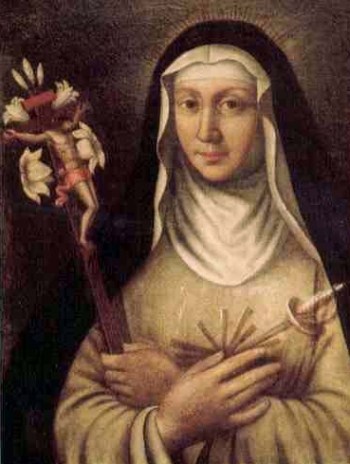 
This month I'd like to introduce another little-known Beata - Maria Bartolomea Bagnesi - whose holy influence actually shaped the life of another worthy and privileged soul: St. Maria Maddalena de' Pazzi (read about her here).  Although, she hasn't reached the final stage of the Canonization Process yet, like her protege, in my personal opinion, she is no less saintly.  This is her story.

Maria Bagnesi was born in Florence, Italy, on August 15, 1514. Having descended from nobility, she grew up in a home where she never lacked for anything, while also enjoying the privileges afforded her status. According to biographies, her mother was somewhat worldly and carefree, and often left the child Maria in the custody of the local Dominican Monastery where one of her other daughters was a nun. This neglect proved providential because our Beata developed into a highly devout soul, herself.  In fact, she planned on following her older sisters into religious life once she came of age (apparently, at least two had become nuns).

However, things took an unexpected turn when Maria's mother suddenly died, obligating Maria to assume the role of lady of the house to help her father - Carlo Bagnesi - manage the day-to-day running of their household, which she did with finesse. Her plan though was to do this temporarily until the opportune time came for her to leave for a monastery... but what she didn't know was that her father was already planning a different life for her.

Described as lovely and charming, many suitors from other noble houses approached Maria's father for the maiden's hand in marriage.  Carlo made his selection among them and when he broke the news to his daughter, she was so distraught she fell into a faint. Upon awakening, Maria found herself afflicted with a mysterious "illness" that left her with muscular weakness and tremors, and chronic pain; she quickly worsened until she was eventually immobile and bedridden.

Maria's father summoned the best doctors to his daughter's bedside but, when none were able to cure her, Carlo resorted to quack-healers who probably did more harm than good.   Maria, who was about 18 at the start of her misfortune, patiently endured every suffering that arose from her condition and those imposed on her by folk-healers; this trial lasted for the next 45 years of her remaining life.

The poor patient resigned herself to her lot by viewing her suffering as a way to deepen her spiritual union with Christ. Slowly, it became evident that Maria's condition was not natural, but rather the hand of God was upon her. Remarkably, her physical pain intensified on Fridays and seasonally, during Lent, which strongly suggests to me she was mystically crucified - stigmatized, I reasonably speculate - although there were no visible wounds reported on her limbs.  She had essentially become a victim-soul for sinners.

Furthermore, other charisms began escalating around Maria that included visits from heavenly personages, prophecy, and even frightening episodes of diabolic attack. On occasion, she was also witnessed levitating above her bed while in a state of ecstatic rapture.  When word of these wonders spread beyond the walls of her home, it set the neighbors' tongues wagging - some revered her as a living saint, while others accused her of being under the devil's influence... but Maria maintained peace and patience in the face of calumny; her humility, along with the strong vocal support of her confessor, finally convinced all of her sincerity and goodness. The Bagnesi home then became a spiritual center in Florence, drawing pilgrims to Maria's room for prayer and counsel.

Sometime in 1544, Maria experienced a partial recovery from her sickness that allowed her to leave her bed for short periods of time. She took advantage of the situation to apply with the Dominicans as a tertiary and was professed the following year.  She added the name "Bartolomea" to her own, in honor of St. Bartholomew, one of the original Twelve Apostles, to whom she was greatly devoted.

Although a Dominican by profession, the tertiary somehow developed a strong affinity with the Carmelite nuns in the Florentine convent of St. Mary of the Angels; a spiritual bond so strong Maria's body was allowed burial within their walls rather than in the common cemetery after her death on May 28, 1577.  It was in this convent the young St. Maria Maddalena de' Pazzi was cured from a serious illness in 1584, after invoking Maria Bartolomea's intercession and subsequently witnessing a vision of the future Beata in heavenly glory. 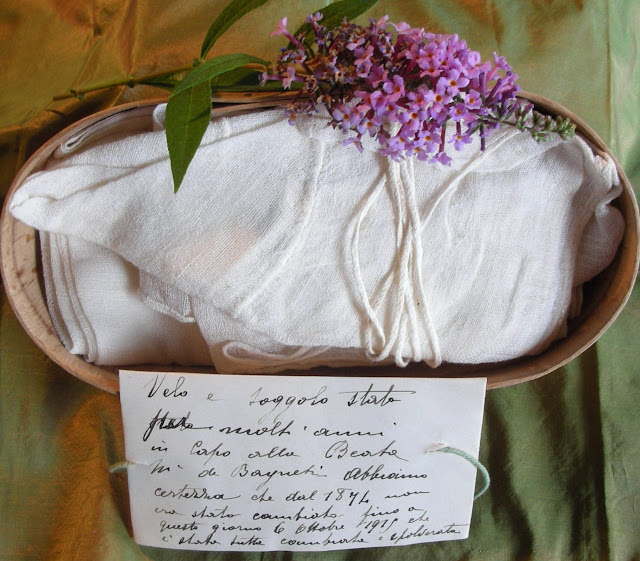 Relics from the coif and veil worn by Bl. Maria Bartolomea Bagnesi.

Bl. Maria Bartolomea Bagnesi was Beatified on July 11, 1804.  Her remains are incorrupt and continue to be venerated in the same Carmel in Florence just a few steps away from the shrine enclosing the body of St. Maria Maddalena, which is also incorrupt!

May these two pure, fragrant lilies of Florence - Dominican and Carmelite spirituality powerfully united - pray for our personal needs and the needs of the Universal Church.


"More than that, we rejoice in our sufferings,
knowing that suffering produces endurance, and endurance
produces character, and character produces hope."