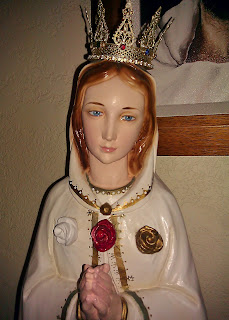 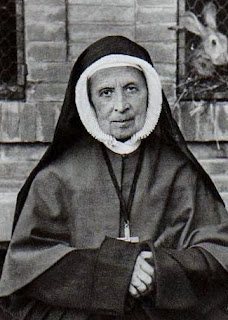 O Mary, the Mystical Rose and St. Therese Couderc, pray and intercede for us!
﻿﻿﻿﻿﻿﻿﻿﻿At this month's prayer meeting at the Gruber Residence, the small group that came together did so with special concern for the 2012 Presidential Election.  During our open prayer time after the recitation of the Holy Rosary, participants prayed fervently for America; for all Christians to stand strongly united and for God to grant us a leader who will help our country out of its current moral and economic tailspin.
﻿For our "Saint of the Month" relic veneration, I presented a 1st Class Relic of St. Therese Couderc (d. 1885) who founded the Sisters of the Cenacle in France.  I spoke about her humble life and highlighted her triumph over the pain of having endured rejection and humiliation from her own community... and how her sweet surrender to the plan of God allowed her to mystically see the mark of his divine goodness on all created things.  After my narration, I was pleasantly surprised at how genuinely touched the group was by the bio of this little-known Saint. 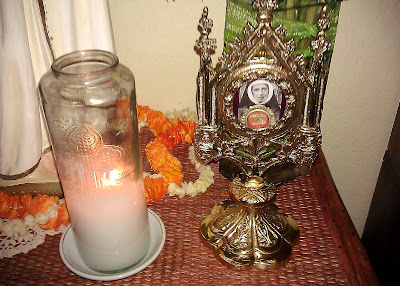 A Sacred Relic from the body of St. Therese Couderc, which I shared with the prayer
group this month.  The Saint's annual feast is observed on September 26th.
Lastly, we welcomed back a familiar face who we hadn't seen for a couple of months... and also had the joy of welcoming a new participant to the monthly meeting.  Our "newbie" later testified with me that she enjoyed the prayer meeting and the warm fellowship with the other participants... and also the food that we all shared afterwards.  I'm certain that we'll be seeing her again in the near future.
Peter @ Guadalupe House Ministry, Honolulu No comments: 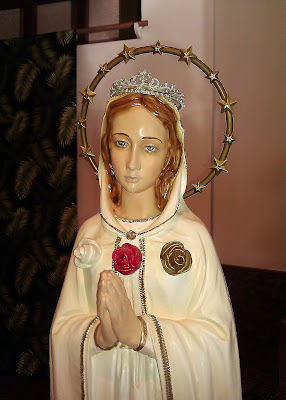 O Mary, the Rosa Mystica, pray for us!
﻿September's ﻿First Saturday Rosary for Peace was prayed by just a small group of participants this month.  The Saint I picked to share about was St. Padre Pio, who is a favorite among many Catholics, especially those  familiar with Christian mysticism.  A sacred relic from St. Pio's stigmata bandages was present on the display altar, along with Our Lady's veil-relic, while we prayed the Rosary in intercession for world peace and for the conversion of sinners.
After the Rosary prayer ended, a visiting group and their priest arrived at our Kailua parish from far away Waianae.  The group came to borrow our Day Chapel to hold a memorial service, as for some unusual reason, there was no facility available on their side of the island to hold a service today.  The presiding priest saw me carrying my pilgrim statue out and he asked if it would be possible for  Our Lady's statue  to remain in the chapel during their little service; I gladly acceded.  So, as it turned out, the Rosa Mystica ended up pulling a "double-shift" today, gracing not only our regular Rosary for  Peace prayer participants but also comforting a grieving family.
Our  next First Saturday Rosary will be prayed on Saturday, October 6th, at 4:30pm in our Day Chapel.  All are welcomed to pray with us and to venerate the blessed relics of Our Lady and the Saints.
Peter @ Guadalupe House Ministry, Honolulu No comments: 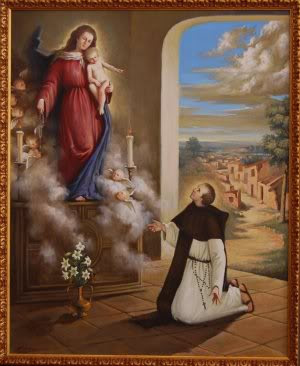 Born into nobility in 1585 at Ribera del Fresno, Spain, little Juan Macias lost both his parent while still a young boy.  Adding to his already sad situation, a reversal in fortunes also caused the financial ruin of his family, leaving Juan in complete poverty.  Having no other recourse but to work to support himself, he sailed to Peru where he labored as a humble shepherd in a South American cattle ranch.  During this solitary period in his life he developed a deep spirituality as well as a desire to consecrate himself completely to God.

Juan’s religious vocation was realized in January 1622 when he was accepted into the Dominican monastery in Lima, Peru.  He was assigned as the doorkeeper for the friary and touched the lives of the poor and the sick with his natural kindness and generosity.  He was also noted for his great devotion to the Poor Souls in Purgatory with whom he had mystical contact.

The Poor Souls often appeared to him in large numbers, begging for his prayers, and Bro. Juan responded generously by performing voluntary penances on their behalf, and offering his Holy Communions and endless rosaries to help deliver them.  Upon their release into Heaven, the grateful souls sometimes reappeared to him in their glory to give him thanks for his assistance, and to encourage him in his charitable disposition towards those still undergoing purgation.  Juan was also encouraged in his worthy efforts to assist the Poor Souls by another great Saint who happened be a friar in the same monastery - St. Martin de Porres, the great Apostle of Charity in Lima.

Bro. Juan died of natural causes on September 16th, 1645 and was greatly mourned by his religious brethren and fellow citizens.  His Beatification was celebrated in 1837 and his Canonization in 1975.  Tradition reports that he freed over a million souls from Purgatory just through his own personal efforts(!), so not surprisingly, he is considered the “Patron Saint of the Poor Souls“.  St. Juan's sacred body is venerated in the chapel of his friary, where it remains remarkably well-preserved.  May the faithful imitate him in his love and devotion to the dearly departed.

A Reflection
"...It is therefore a holy and wholesome thought to pray for the dead, that they may be loosed from sin."
~ 2nd Maccabees 12:45

A Short Prayer
Grant unto the Poor Souls, O Lord, eternal rest and let perpetual light shine upon them.  May they rest in peace.  Amen.