Monthly Message from the Queen of Peace of Medjugorje: May 25th, 2021

"Dear children!  Today I am looking at you and calling: return to God because He is love and out of love has sent me to you to lead you on the way of conversion.  Leave sin and evil, decide for holiness and joy will begin to reign; and you will be my extended hands in this lost world.  I desire that you be prayer and hope to those who have not come to know the God of love.  Thank you for having responded to my call."
Peter @ Guadalupe House Ministry, Honolulu No comments:

Saint of the Month - May 2021: Saint Margaret of Citta-di-Castello 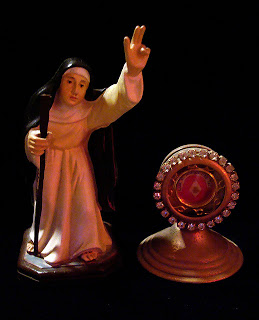 St. Margaret of Citta-di-Castello
Patroness of the Unwanted ~ Feast: April 13th
"It's about time." Those were my exact words immediately after I learned from the internet that this holy woman was declared a Saint this past April 24, 2021.  Her name is Margaret of Citta-di-Castello - or Margaret of Metola, as she's also known - and I was introduced to her life over 25 years ago back when she was designated a Blessed. Since then, I've admired her and was convinced she was indeed a Saint... and since my ministry was also gifted by a priest with an authenticated bone-relic from her body, I prayed regularly for a favorable conclusion to her Sainthood Cause; patiently hoping, like many of her devotees, for her canonization.  It finally happened 700 years after she died.
Fairly well-known in pro-life circles, St. Margaret's life is still generally unfamiliar to the rest of the world.  She was born sometime in 1287 to a noble family in Metola near Perugia, Italy.  Her birth was not joyously celebrated nor was there thanksgiving from her parents - rather, little Margaret elicited disappoint, if not disgust.  You see - upon seeing her for the first time, it was apparent the child was not normal, at least from her parent's point of view.  The baby was born with a whole slew of physical anomalies: she was a dwarf; had a severely curved spine; had one leg shorter than the other; and lastly, she was also blind.  If that weren't enough misfortune, she was described as homely in appearance by biographers.
Embarrassed by her appearance, Margaret's smug parents decided to hide her from the rest of the world, which they successfully did in their castle until the child was age 6, when she was nearly discovered by a family guest.  The situation prompted her parents to transfer their daughter to a remote chapel in the woods where she was walled up in a small, attached room.  A window into the church allowed the priest to feed Margaret, as well as, to instruct her on various truths of the Catholic Faith. When she was old enough and sufficiently prepared, the chaplain regularly gave her the Eucharist so it's not surprising she developed a highly pious character.
In 1305, civil unrest in the vicinity of the chapel necessitated another move for Margaret so she was brought back to the palace and locked in a cell for another two years.  She was only granted freedom when reports of miraculous cures occurring at the tomb of a deceased Franciscan holy man - Bl. Giacomo of Citta-di-Castello, d. 1292 - reached her parent's ears.  They secretly took Margaret to his shrine and, when no change occurred in her appearance, the couple did the unthinkable - they simply left without telling her.  Poor Margaret was abandoned in a strange town; alone, amongst strange people... and without any resources. 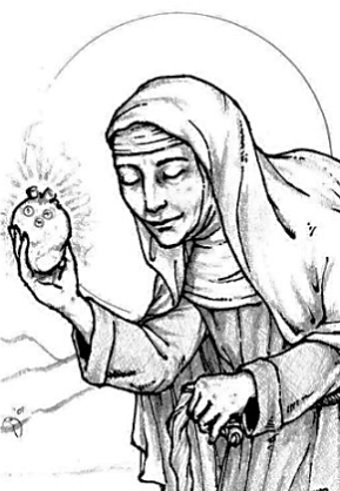 An old sketch I made of St. Margaret back in 2007, depicting her with
her miraculous heart.  Read on to learn more...
Fortunately for Margaret, some of the local homeless had pity on her and took her under their wing, supporting her and teaching her the lay of their city so she could find her way around.  For a while she begged, too, but as certain townsfolk came to know and love the sweet-natured maiden, they took turns housing her.  In return, Margaret repaid their kindness by doing chores for them such as schooling and caring for their children, knitting and mending clothes, and conducting errands.  She also frequented the church for fervent prayer, and hobbled about in the streets carrying out charity work amongst the poor, with whom she had a special affinity.
What makes this Saint's life so inspiring is the manner in which she dealt with her multiple disabilities and many hardships.  One would reasonably understand if she turned out to be a resentful and bitter human being, but instead, she was quite the opposite - testimonies after her death consistently relate how Margaret never complained about her lot in life; never expressed self-pity; and never spoke ill of her parents or anyone else, as a matter of fact.  Rather, she radiated innocence and simplicity; was conscientious in the practice of the Faith; ever kind and generous to all; infectiously joyful; was a wise counselor; and was readily forgiving to her offenders to the extent of even defending her cruel parents against anyone who rightfully spoke ill of them.  Added to her innate goodness were the voluntary mortifications she practiced - rigorous fasting, the wearing of a hair-shirt, and the routine use of the discipline.
Except for a 2-year stint in a convent that didn't end well, through no fault of her own, Margaret remained a lay-apostle for the duration of her life.  She did, however, in 1311, become a Third Order Dominican and was clothed in their black and white habit. Her continued spiritual fervor, service to others, and miracles endeared her to the citizens of Citta-di-Castello, who revered her as their resident living Saint. 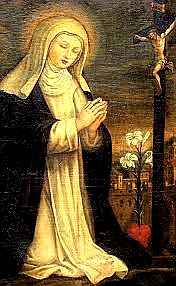 An early, stylized depiction of the Saint.  Note her heart with a lily for purity sprouting from it.
Speaking of miracles, Margaret's other claim to fame was her wonder-working abilities. Through the marvelous grace of God, this Saint performed many miracles during and after her lifetime.  Among the most commonly cited in her biographies are the following mystical gifts:
+ Healing - she cured the sick with the touch of her hand.  One example told how a married friend of hers developed a tumor in one of her eyes that was causing blindness.  After begging the Saint's help, for the sake of the afflicted woman's family, Margaret touched the eye and it was cured instantly!
+ Ecstasies & Levitation - Margaret was often seen exercising these charisms jointly.  On one specific occasion, while on a visit to the local prison to feed and minister to convicts, a certain Alonzo rudely rejected her gifts.  The little mystic responded by quietly kneeling in prayer and, as everyone watched in awe, she slowly floated several feet into the air.  If that weren't amazing enough, Margaret's features were also transfigured by a heavenly light and an angelic beauty!  The miracle lasted for several minutes, after which she descended to the floor and was restored to normal appearance... but more importantly, Alonzo was immediately converted!
+ Miracle Fire Fighter - on another occasion, when she was given permanent lodging at the home of a well-off benefactor - Lady Gregoria Venturino - the ground floor of the house caught fire.  The Saint was praying in her attic room at the time and Gregoria frantically shouted for her to quickly come down.  When Margaret appeared at the top of the stairs, all she did was toss her cloak down, directing her friend to throw it into the flames. She then calmly returned to her cell and Gregoria did as she was told.  The fire was inexplicably extinguished the moment the cloak came into contact with it!
+ Celestial Apparitions - although blind since birth, Margaret was privileged to see divine mysteries and personages that most human eyes are not privy to.  For example, at the moment of consecration during Mass, she sometimes "saw" Christ resplendent on the altar in place of the Host.
+ Prophecy - on more than one occasion, the Saint demonstrated the ability to foresee future events.  One example was when she revealed to a lady-friend and the woman's daughter that both would one day wear the Dominican habit, like herself.  At first the women laughed it off, but after the mother was unexpectedly widowed, they joined the Dominican Tertiaries together, thus fulfilling Margaret's prediction.
When she died on April 13, 1320, at around age 33, Margaret's funeral was attended by crowds of admirers.  When the clergy attempted to remove her corpse to the cemetery for burial, a heated confrontation broke out between them and the people, who insisted Margaret be interred in the church.  As the arguing was on the verge of escalating into a riot, shouts of "Miracle! Miracle!" sounded in the air, which silenced all.
In the midst of the chaos, a couple with a crippled daughter had made their way to Margaret's open casket to beseech her help for their child.  To everyone's amazement, the dead woman's left arm lifted and settled on the disabled girl, who was instantly cured.  It was one of the earliest post mortem healings - one of many - attributed to the Saint, and it settled the argument as to where she would be buried.  Margaret was laid to rest in the church.

The body of St. Margaret, as venerated in the Church of St. Domenic, Citta-di-Castello.
In June 1558, Margaret's coffin was opened after it was discovered to be badly disintegrated during its translation to a worthier tomb; the Saint's body was found perfectly incorrupt, which sparked renewed interest and devotion to her.  She was eventually Beatified on October 19, 1609 and... to the joy and surprise of her many devotees, unexpectedly declared a Saint by Pope Francis in April 2021!  For obvious reasons St. Margaret of Citta-di-Castello is popularly acclaimed as the Patron Saint of the Unwanted Unborn and the Patroness of the Disabled.
I'll end this post with one last marvel recounted of this Saint.  Shortly after her death, Margaret's heart was extracted and opened, where upon three "pearls" were discovered within its cavity (incidentally, her Italian name "Margherita" means "pearl").  More astoundingly, the pearls were individually etched with holy images of the Saint's favorite devotions: the Christ Child, the Holy Virgin, and St. Joseph.  The discovery of these mysterious pearls brought clarity to somewhat cryptic words Margaret often uttered in life: "If you only knew what I had in my heart!"
St. Margaret of Citta-di-Castello, pray for us!
Peter @ Guadalupe House Ministry, Honolulu No comments: