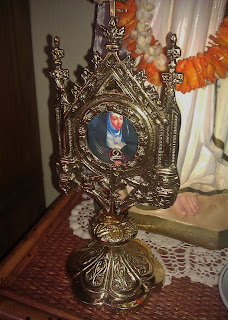 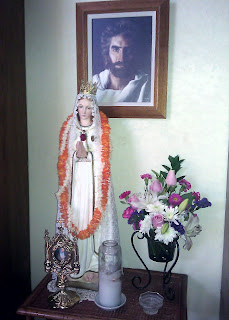 A 1st Class Relic of Bl. Angelina di Marsciano occupies a place close to the
Rosa Mystica on the Gruber Family's home altar

It was just a small group of us who came together at the Gruber Residence to pray as members of Our Lady of Fatima Prayer Group.  Other regular participants had personal engagements... but none the less,  it was still a meaningful evening of prayer and Christian fellowship for us who met tonight.  The special presence of the Holy Spirit was felt in our midst along with Our Lady... and heartfelt words flowed freely during our time of personal prayers and intercessions.
﻿
﻿﻿﻿﻿﻿﻿﻿﻿This month, for the prayer group's "Saint of the Month", I enthusiastically shared the life and relic of a little-known holy woman - Bl. Angelina di Marsciano - whose Memorial is celebrated every year on July 14th.  She was a noblewoman, who inspired by the Franciscan ideal, had forsaken a life of luxury and comfort to found a religious congregation.  Her excellent pious example led other women of rank to leave their families so as to follow her manner of living, which prompted intense opposition to her from other prominant families.  Bl. Angelina's extraordinary faith helped her to overcome every adversity, sometimes even through miraculous means; she reaffirms for all Christians that anything is possible if we will only have faith in God.

... and so tonight, as we recited the Holy Rosary, my special focus was asking God for the same gift of Faith that inspired and motivated Bl. Angelina di Marsciano and all the other Saints/Blesseds; the luminous faith that lights up the dark.  In lieu of all the recent and disturbing news coverage of the Aurora (Colorado) theater shootings, it's pretty obvious that America is experiencing a time of overwhelming darkness.  May God rekindle in us the light of Faith... and may Our Lady of Fatima and Bl. Angelina intercede for us. 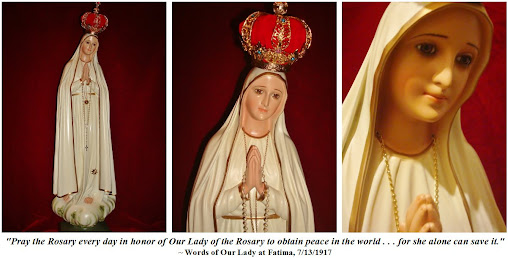 Earlier this week, the above-pictured statue of Our Lady of Fatima arrived from Ohio from where I had recently purchased it from a private seller.  It stands 27" tall from the base to the top of the head... and it is absolutely stunning!  It will be used by my personal ministry as a "pilgrim statue" to spread devotion to Our Lady and the Holy Rosary, along with my other pilgrim image - a larger Rosa Mystica statue. 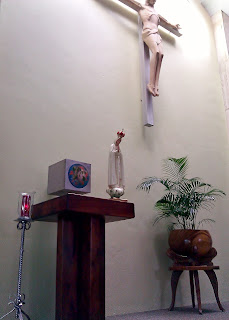 This morning, when I attended Mass at neighboring St. John Vianney's church, I brought along the Fatima statue to have it blessed by the priest. After the blessing, I was invited to participate in the Rosary Prayer by a small group of parishioners who regularly pray the Rosary in the church's Blessed Sacrament Side-Chapel after the Mass.  I gladly accepted their invitation... and had the joy of presenting the statue for the veneration of the people who were gathered to pray.

Not wanting to disrespect Our Lady by placing her newly blessed image on the floor where I knelt down to pray, I placed the Fatima statue on the koa wood pedestal beside the Tabernacle for the duration of the prayers.  It was actually quite moving and inspiring to be able to pray in the physical presence of our Eucharistic Lord... while his beloved Holy Mother was represented beside him through the statue.

When the Rosary ended, several people expressed their gratitude for the statue's impromptu pilgrim visit and all commented on its exceptionally lovely face and affable expression.  My prayer is that Our Lady will use this new statue to touch many hearts for her Divine Son as I hope to make it available for future pilgrim visits to my home-parish of St. Anthony's Church in Kailua, and elsewhere where my ministry is invited and welcomed.

Our Lady of Fatima, Queen of the Holy Rosary,
pray for us! 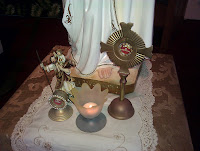 Our Lady, the Rosa Mystica, Mother of the Church... and St. Christopher, pray for us.
(click on the photos to view larger images)

Another First Saturday Rosary for Peace was prayed at St. Anthony's Church in Kailua, Oahu.  Our group of regular attendees again came together to offer prayers for peace, and to also intercede, in union with the Blessed Mother, for the conversion of sinners.

At this month's meeting, we were spiritually joined by the ancient Martyr, St. Christopher - the "Christ Bearer" - whose sacred relic was displayed on the altar with Our Lady's veil-relic... and whose life was also shared with all the people who were present.

The Rosary, along with the Mass that followed in the main church, made for an evening that was filled with blessings and tangible graces from the Holy Spirit. 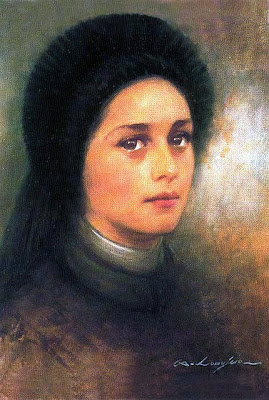 An “Angel of Sorrow” was how another nun described the final moments of the Beatified Martyr, Bl. Mercedes Prat.  Like many other faithful religious who lived during the Spanish Civil War in the 1930’s, Bl. Mercedes was killed by a godless institution for simply being a faithful Catholic nun who refused to deny her faith in Jesus Christ.

Born on March 6, 1880 in Barcelona (Spain), Mercedes lost her parents while she was still a little girl.  She and her younger siblings were taken in by other family members and educated in a school administered by the Sisters of the Society of St. Teresa of Jesus (a.k.a. the “Teresians”, affiliated with the Carmelite Order).  The positive spiritual influence of her nun-teachers must have rubbed off on her as the beautiful young Mercedes developed a deep prayer life and volunteered her spare time working as a successful catechist for her local parish church.  In 1904, she took a giant leap of faith by joining the same congregation that influenced her in her early childhood.

As a nun Sr. Mercedes was described as a “true Teresian" and impressed her peers with her naturally gentle demeanor and her evident love for God.  Her students were also quite fond of her as she seemed to understand them; she was firm when she had to be, but always acted with a genuine concern for their well-being, which they greatly appreciated.  Her reputation as an excellent teacher, and her pious example, made her a stand-out among the Teresians, and so it was for many years until the summer of 1936.

In the heat of anti-religious sentiments during the Spanish Civil War, the militia invaded the Teresian school and ordered Sr. Mercedes to identify herself - although she was aware of the danger, she calmly and courageously responded that she was a teacher and a Catholic religious.  She and another sister were immediately taken into custody and escorted off the school premises by armed soldiers.  What followed next for the two nuns was a round of questioning, humiliations, and death threats but both women remained steadfast in their faith.

In the early morning hours of July 24th, Sr. Mercedes and her companion were ordered to another location… and during an interruption in their transfer Sr. Mercedes paused to recite a few prayers, which infuriated one of the soldiers.  Without any warning, the soldier callously fired his gun at her and she fell mortally wounded on the side of the road, repeating the holy names, “Jesus… Joseph… Mary.”  Her companion rushed to her side to comfort her and heard the final words from the dying religious, “Forgive us… as we forgive.”

The Church recognized the heroic martyrdom of Sr. Mercedes Prat and proclaimed her a Blessed on April 29th, 1990.

A Reflection
“Behold, I send you forth as sheep in the midst of wolves: be ye therefore wise as serpents, and harmless as doves.”  ~ Words of Jesus Matthew 10:16

A Short Prayer
Lord, in the midst of persecution, help us to be like your spouse, Bl. Mercedes: steadfast in faith, prayerful, and forgiving.  Amen. 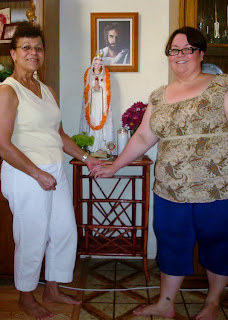 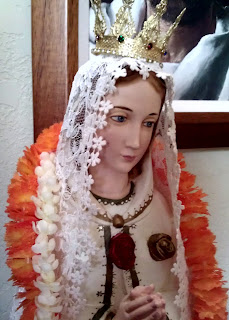 
Last night, I again participated in a monthly prayer meeting held at the Gruber residence in Mililani; it was the second gathering of the "Our Lady of Fatima Prayer Group", that they recently started for their family and friends.  What made this event especially meaningful for me was the fact that I donated my smaller 27" Rosa Mystica statue to their home for the use of their prayer group.

Although, I am deeply attached to that particular image, I still have my 36" pilgrim statue that I use for my ministry... and I strongly felt that it was Our Lady's desire that I should donate the statue to these dear friends in order to spread the Rosa Mystica devotion to another part of our island.  Judging by their reaction when they first saw the statue, the mother and daughter pair was very happy and excited to welcome the Rosa Mystica into their home. 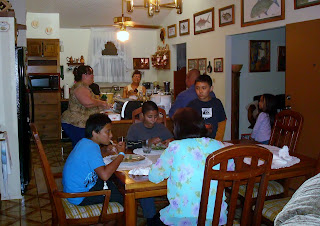 The prayer meeting was again filled with the tangible presence of the Holy Spirit... we started by reading a scriptural passage from the Holy Bible and also a message from Our Lady of Medjugorje, followed by the sharing of the life of St. Germaine Cousin and her 1st Class Relic... the Holy Rosary was then prayed and the meeting concluded with our small group of participants interceding for each others' personal intentions.  Afterwards, we celebrated our Christian fellowship with a delicious potluck dinner.