Monthly Messages from the Queen of Peace of Medjugorje: February 2019 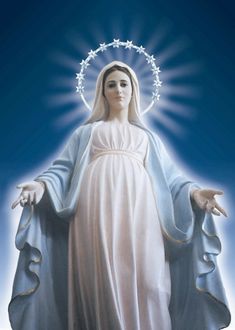 Mary, Queen of Peace, pray for us!

Our Lady's Monthly Message to the World on February 25th:
"Dear children! Today, I am calling you to a new life. It is not important how old you are, open your heart to Jesus who will transform you in this time of grace and, like nature, you will be born into a new life in God’s love, and you will open your heart to Heaven and the things of Heaven. I am still with you, because God permitted me out of love for you.  Thank you for having responded to my call."

Our Lady's Special Message to Mirjana Dragicevic-Soldo on February 2nd:
"Dear children, the love and goodness of the Heavenly Father give revelations which make faith grow, for it to be interpreted, that it may bring peace, certainty and hope. In this way, I, too, my children—through the merciful love of the Heavenly Father—always, anew, am showing you the way to my Son, to eternal salvation. But, unfortunately, many of my children do not want to hear me; many of my children are of two minds. And I—I always, in time and beyond time, magnified the Lord for all that He has done in me and through me. My Son gives Himself to you and breaks the bread with you. He speaks the words of eternal life to you so that you may carry them to everyone. And you, my children, apostles of my love, what are you afraid of when my Son is with you? Offer your souls to Him so that He can be in them and that He can make you instruments of faith, instruments of love. My children, live the Gospel, live merciful love for your neighbors, and, above all, live love for the Heavenly Father. My children, you are not united by chance. The Heavenly Father does not unite anyone by chance. My Son speaks to your souls. I speak to your heart. As a mother I am saying to you: set out with me, love one another, give witness. Do not be afraid, with your example, to defend the truth—the Word of God which is eternal and never changes. My children, whoever acts in the light of merciful love and truth is always helped by Heaven and is not alone. Apostles of my love, may you always be recognized among all others by your hiddenness, love and radiance.  I am with you.  Thank you."

Saint of the Month - February 2019: Saint Gabriel of the Sorrowful Virgin

This month I feature another Saint who could easily be overlooked.  He wasn't a founder of an Order or a religious congregation; he never built a church or established a famous shrine; he wasn't martyred for the Faith; and he never worked miracles in his life.  Instead, during his brief spiritual career, he was inconspicuous to the world.  Yet today, he's a Saint.  So what was his secret to sanctity you might wonder?  Simple - he lived his personal motto, and lived it well:

St. Gabriel of the Sorrowful Virgin was born Francis Possenti on March 1, 1838.  He was the 11th of 13 children born to an upper-middle class family in the Italian city of Assisi.  According to what I've read about him, Francis was pious as a child - a practicing Catholic but not fervent - and his spirituality was especially shaped by his parent's devotion to Our Lady of Sorrows.

At 13, Francis experienced a serious medical crisis that nearly cost him his life.  More out of fear than genuine devotion, the adolescent prayed for a cure and promised to dedicate his life to God if he recovered.  He, indeed, was cured but the vow he made was quickly forgotten.

Two years later, at age 15, Francis was again sick - this time with an infected ulcer in his throat.  He once more turned to prayer for relief and repeated the promise he made earlier.  He was again healed... was fervent for a while... but still failed to make good on his promise.  Rather, he allowed himself to get caught up in all sorts of innocent distractions: he enjoyed hanging with friends, showing off his excellent dance skills, and was an avid hunter (he was an expert marksman).  Furthermore, Francis possessed a gregarious personality and naturally gifted with charisma and leadership ability, which made him popular with his peers.  If that weren't fortunate enough for him - he was also tall, dark and handsome, which made him the object of affection among the girls in his wide social circle.  In fact, he was known at the time for putting a lot of effort into his appearance and had a succession of girlfriends, which was probably a big reason why his intent to enter consecrated life fell through twice.

Things drastically changed for Francis when, circa 1855, he attended a procession honoring a famous icon of the Blessed Virgin in Spoleto, where his family had relocated.  When the image passed in front of him, its eyes mysteriously pierced him to his very soul and he simultaneously heard an inner voice gently rebuke him for not following-through with his promise and to hasten in fulfilling it.  That was it - from that very moment he resolved to quit the world to follow God.  The young man announced his plan to his family and friends but no one took him seriously; they assumed it was a short phase that would speedily run its course.  It wasn't.

Francis first applied with the Jesuits but was turned down for being too young... so he next went to the Passionist Congregation and was accepted.  His father made a last ditch effort to dissuade him but gave up when he was finally convinced of his son's sincerity.  Francis entered the Passionist novitiate in Morrovalle in September, 1856, and took the religious name of Gabriel of the Sorrowful Virgin.

The next few years of Gabriel's life would seem uneventful from a worldly point of view.  As mentioned earlier, externally, he never stood out for anything extraordinary.  But internally, within the young man's soul, spiritual growth was moving at rapid speed.  It almost seemed like he was making up for lost time and was rushing in his effort to become holy.  From the personal notes he left behind, it was clear he was intent on conquering his old self by perfectly observing the strict Passionist Rule... and, of course, there was his personal motto: faithfulness in small things.

Four to five years into his religious life, Gabriel was diagnosed with dreaded tuberculosis.  Back in his time, it was generally considered a death sentence, but the young man took his fate in stride.  He had already endeared himself to his superiors and brethren, who were impressed with his deep faith, courage, humility, and spirit of prayer and self-sacrifice.  Despite the increasing pain he suffered, he projected cheer and calm.  In life he personified Passionist spirituality and while dying, he did so, too - moments before his death on February 27, 1862, Gabriel suddenly gazed upwards to his left with a look of ecstatic joy.  He then raised his arms towards something unseen before expiring with a smile on his face.  It was surmised that Our Lady, to whom he maintained a strong devotion, had personally come to claim his soul.  He was just a couple of days shy of his 24th birthday. 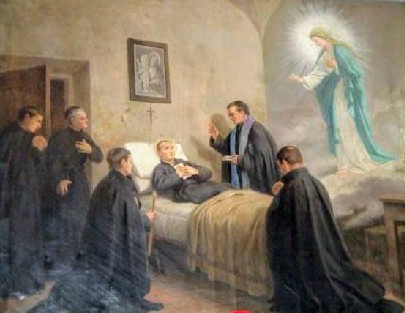 A scene of St. Gabriel's holy and happy death.

The Passionists never forgot their saintly member and Gabriel's fame of holiness spread outside of the congregation and to the outside world, especially after a biography of him was published.  Many cures were then reported through his intercession, which eventually culminated in his Canonization on May 13, 1920.  St. Gabriel of the Sorrowful Virgin is designated as a Patron Saint of the Youth - may he bless and inspire today's young people to imitate him in living a life of faith and devotion.

A Prayer to St. Gabriel of the Sorrowful Virgin

O Lord, you taught Saint Gabriel of the Sorrowful Virgin to contemplate the pains of your sweet Mother, and by means of her raised him to the highest peaks of sanctity, grant to us, through his intercession and example, to live so united to your Sorrowful Mother so as to enjoy always her maternal protection. You, who are God, with the Father and the Holy Spirit, one God, for ever and ever.  Amen.