Monthly Messages from the Queen of Peace of Medjugorje: May 2015 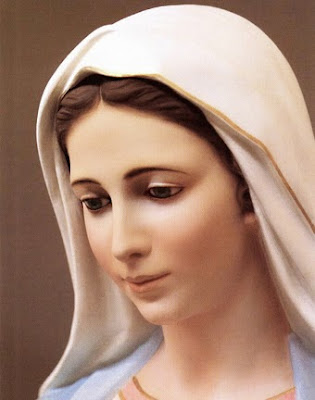 O Mary, Queen of Peace, pray
and intercede for us...

Our Lady's Monthly Message to the World on May 25th:
"Dear children!  Also today I am with you and with joy I call all of you: pray and believe in the power of prayer.  Open your hearts, little children, so that God may fill you with His love and you will be a joy to others.  Your witness will be powerful and everything you do will be interwoven with God's tenderness.  I am with you and I pray for you and your conversion until you put God in the first place.  Thank you for having responded to my call."

Our Lady's Special Message to Mirjana Dragicevic-Soldo on May 2nd:
"Dear children, open your hearts and try to feel how much I love you and how much I desire for you to love my Son.  I desire for you to come to know Him all the better, because it is impossible to know Him and not to love Him - because He is love.  I, my children, know you.  I know your pain and suffering because I lived through them.  I laugh with you in your joy and I cry with you in your pain.  I will never leave you.  I will always speak to you with motherly tenderness.  And I, as a mother, need your open hearts to spread the love of my Son with wisdom and simplicity.  I need you to be open and sensitive to the good and mercy.  I need you to be united with my Son, because I desire for you to be happy and to help me to bring happiness to all of my children.  My apostles, I need you to show everyone the truth of God, so that my heart, which suffered and today suffers so much pain, can win in love.  Pray for the holiness of your shepherds, so that in the name of my Son they can work miracles, because holiness works miracles.  Thank you." 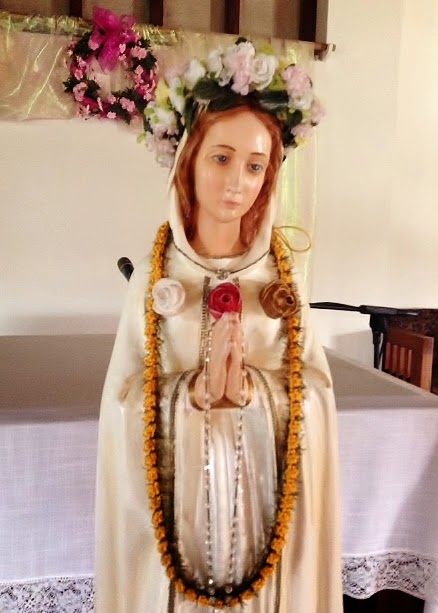 Happy Month of Mary, everyone!  Again, I was pleasantly surprised we had a decent turnout tonight for the First Saturday Rosary.  After all, it was the evening of the much-hyped Mayweather vs. Pacquiao "epic" battle and even the Saturday evening Vigil Mass was half full, which was a little disappointing... but thanks be to God for our dedicated group of regulars - faithful prayer intercessors - who made it a point to still attend to pray for much-needed Peace for the entire world.

Before our prayer began, I shared about this blog's featured Saint of the Month, St. Riccardo Pampuri; an ordinary man who expressed extraordinary Love and Charity towards poor, suffering souls... and because of it, eventually ended-up a Saint.  What was his secret to sanctity?  St. Riccardo recognized and served Jesus in everyone, especially the sick he came into contact with on a daily basis.  It's a positive habit that all of us can learn to do and put into effect in our personal lives... and not just with the sick, but with all people we cross paths with daily.  It just takes practice. 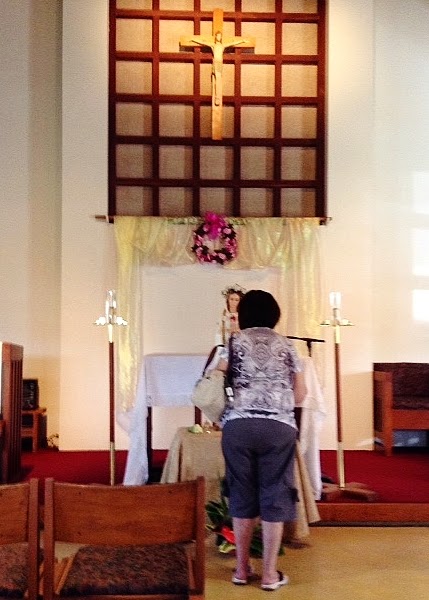 One woman, in particular - a newbie to the parish's monthly First Saturday Devotion - was so impressed by what she learned about St. Riccardo's life that she approached me after the Rosary Prayer ended, and asked me to type his name into her iPhone so she could research more about him later.  She then proceeded to the display altar to venerate the 1st Class [bone] Relic of his, which I brought to the prayer gathering (right photo).

The above story is exactly why this ministry exists - to help people personally connect with the Saints and to find inspiration in their lives and achievements; so long as one person's soul is touched for the better at each meeting, I hope to continue doing what I'm doing for a long while more.

The next Rosary for Peace at St. Anthony of Padua Church will be held on Saturday, June 6th, beginning at 4:25pm.  We invite you to pray with us and to find inspiration in the lives and faith-examples of our spiritual heroes - the Saints.  'hope to see you there!

Saint of the Month - May 2015: Saint Riccardo Pampuri 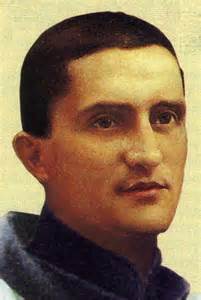 On August 2nd, 1897, Innocenzo and Angela Pampuri welcomed little Erminio into their large family – he was their tenth of eleven children.  Sadly, early childhood wasn’t a happy experience for Erminio as his mother died of tuberculosis when he was three, and his father died in an accident when he was ten.  His grandparents took him in and raised him with the help of a pious aunt.

In his youth Erminio had originally dreamed of becoming a priest but changed his mind through the influence of a favorite uncle who was the town doctor.  He studied medicine at the University of Pavia, and in his spare time, he fortified his spiritual life with daily attendance at Mass and involvement with two religious associations - the Society of Saint Vincent de Paul and Catholic Action.  In 1917, his medical training was interrupted after he was drafted into the Italian Army, but resumed in 1920; he graduated with honors from the university in July 1921. 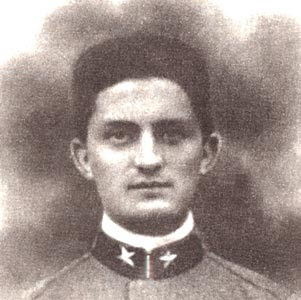 The young doctor took up practice in the town of Morimondo, near Milan, where he endeared himself to the locals by his skill, sense of humor, and his generosity towards the poor, whom he treated for free.  Erminio continued to involve himself with several religious and charitable groups, and even started one of his own to help care for the sick-poor: the Band of Pius X.  Despite his professional and personal successes, Erminio felt an emptiness deep within his heart; God’s special call had returned and this time he felt he couldn't resist it.  After much prayer and discernment, Erminio left his practice and joined the Hospitaller Order of Saint John of God on June 22, 1927.  He took the religious name of "Bro. Riccardo" and was professed a little over a year later on October 24, 1928.

As a religious, Bro. Riccardo served his congregation by running a free dental clinic in Brescia, where his skills as a physician were put to valuable use.  His deep spiritual life complemented his work perfectly, and he touched many souls through his dual vocation; he truly recognized Jesus in his patients... and in addition, being dearly devoted to the Blessed Virgin, Bro Riccardo often turned to her for guidance and counsel. He prayed the Holy Rosary often and encouraged his patients to pray it as part of their healing process.

"Pray that neither self indulgence nor pride, nor any other evil passion, prevent me from
seeing in my patients Jesus who suffers, and from healing and comforting Him."

~ Extract from a letter written by St. Riccardo to his sister


In April 1930, the good Brother experienced a relapse of pleurisy, which he first contracted during his military service.  The illness quickly degenerated into bronco-pneumonia, to which he succumbed on May 1, 1930; he was only 32-years-old.

The shrine-tomb of St. Riccardo Pampuri located in the parish church of Trivolzio, Italy.
The body was reportedly found incorrupt and whole, although somewhat darkened.

Bro.  Riccardo's death was greatly mourned by his clients and by his fellow religious who were convinced of his personal sanctity.  He was buried in the town of Trivolzio and soon cures were being reported at his tomb.  The deceased brother's reputation for holiness endured the test of time, and after two miraculous healings were officially recognized by the Church, Riccardo was Canonized by the late Pope John Paul II on November 1, 1989.  His incorrupt body - covered in a life-like mask - is venerated in the parish church of Trivolzio.  May St. Riccardo Pampuri intercede for our personal needs... and the needs of the entire Church.

A Reflection
How will you be remembered after your death... fondly as a friend, or despised as a foe?

A Short Prayer
St. Riccardo, you were a friend to all peoples, especially to the poor and the sick.  Today, your memory is venerated worldwide because of your goodness - may we follow your noble example.  Amen.