Early today, while walking from my car to my parish church in Kailua for morning Mass, I was surprised by a spectacular sight - there, above the church was the brilliant figure of our Blessed Mother looking like her statues of Our Lady of Fatima!  I was stunned, to say the least, but I quickly took two photos with my cellphone (the clearest image is shown below)... and without much thinking, I uttered, "What is it, Our Lady?" 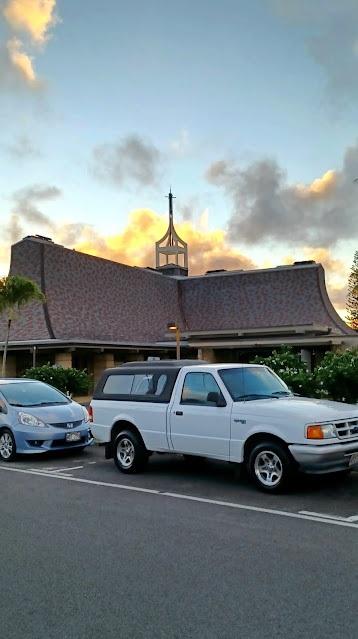 The Holy Virgin above the church roof,
to the right of the steeple.  A closer view of
her glowing silhouette is shown below (note
its difference in color from the clouds)... 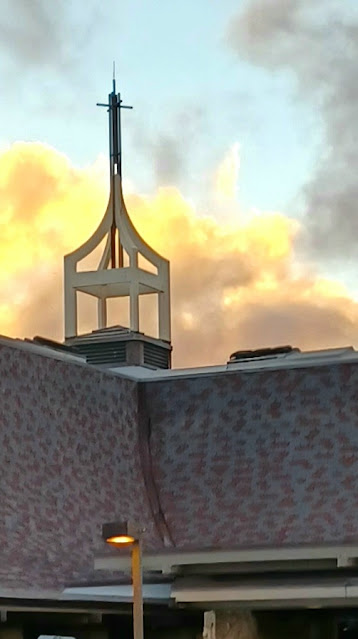 ... and to my astonishment, there was actually a response - as she started to fade I heard the following reply not with my ears but within my heart; words spoken clearly and slowly:
"Love... my... Son."
I was deeply impressed and excited throughout the entire Mass; the message resonated in me and if it wasn't enough - fine flakes of escarchas manifested on my palms after the Consecration.
I'm convinced this experience and the words I heard weren't meant for just me, alone - I discerned it's intended for everyone.  There was a quality to the tone of the voice that was commanding and somber, and almost pleading, too... which is why I felt the need to share this message.
Please - LOVE HER SON.
Peter @ Guadalupe House Ministry, Honolulu No comments:

Monthly Message from the Queen of Peace of Medjugorje: September 25th, 2021

"Children!  Pray, witness and rejoice with me, because the Most High sends me again to guide you on the way to holiness.  Be aware, children, that your life is short and eternity awaits you, so that with all the saints you glorify God with your being.  Do not worry, little children, for earthly things, but yearn for heaven.  Heaven will be your goal and joy will reign in your heart.  I am with you and I bless you all with my maternal blessing.  Thank you for having responded to my call.“
Peter @ Guadalupe House Ministry, Honolulu No comments: 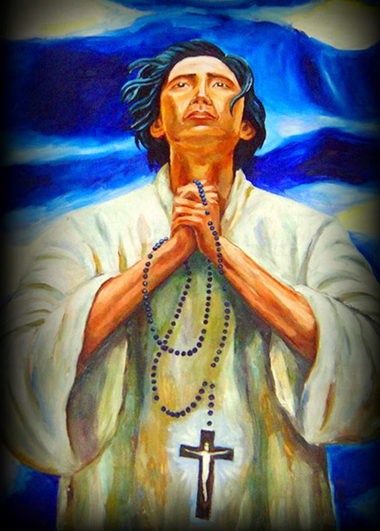 St. Lorenzo Ruiz
Missionary & Martyr ~ Feast: September 28th
With this author being Filipino, this September Saint resonates with me; he was a heroic layman and Martyr in whom I take personal pride in.  This is a biography of St. Lorenzo Ruiz of the Philippines...
“If I have a thousand lives to offer,
I will offer them to God.”
~ St. Lorenzo
St. Lorenzo was born in 1600 in Binondo (Manila), Philippines, to a Chinese father and Filipina mother.  During his time, Spanish Dominicans were ministering in the region and young Lorenzo was fortunate to have been catechized and educated by these missionaries.  He served as an altar boy and later as the sacristan of the Binondo church.  He married a native Filipina named Rosario and together they had two sons and one daughter.
According to biographies, Lorenzo exhibited a strong Marian devotion and was a member of the Confraternity of the Holy Rosary.   Because of his strong ties with the Dominican missionaries, he became fluent in Spanish, and also spoke Chinese along with Tagalog, his native tongue.  His education and training afforded him the valuable skills needed to work as a scribe, calligrapher, and notary.
In the mid-1630s Lorenzo was falsely accused of killing a Spaniard.  Fearing he’d be unjustly tried by the Spanish officials for a crime he didn’t commit, he sought sanctuary on a ship with four Dominican missionary priests who were headed for Japan, and set sail with them.  He intended to disembark in Macau to find a livelihood for himself and his family, but for some reason the ship bypassed Macau.  Initially disappointed at the turn of events, he had no choice but to face the fact that he was headed for Japan… and reluctantly embraced his role as a lay-missionary. 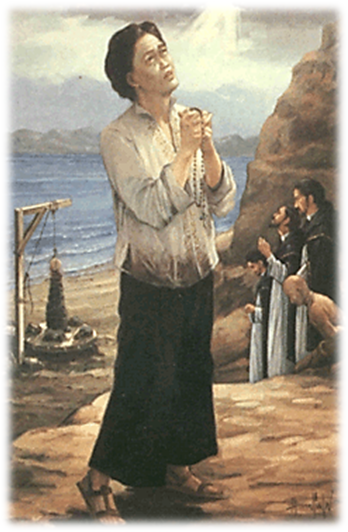 Whether the band of missionaries were fully aware of it, the political climate in Japan under the Tokugawa Shogunate, was one of heated persecution against Christians; the western priests and their local converts were being rounded up and executed.  Lorenzo’s little group landed in Okinawa – in the midst of this anti-Christian hostility - where, within a few days, they were discovered and captured by government officials.  Imprisoned, these men were cruelly mistreated because of their beliefs and lived under subhuman conditions - regularly beaten, starved, and under the constant threat of death.
Among the frightening tortures they endured was having large quantities of water forced down their throats only to have it painfully ejected from their mouths, nostrils, and ears, by having planks placed over their stomachs and stomped on by the guards.  Yet, another brutal torture was having splinters of bamboo forced under their finger nails.
Mercifully, one of the priests died relatively early on from the direct result of the torture, and was spared long-term pain... but the same can't be said for the rest of the group.  The truth is - another priest and Lorenzo's fellow lay-missionary caved in to the Japanese officials due to their excruciating ordeal… but later retracted their renunciations of the Faith.  Lorenzo, himself, at one point, nearly broke under the cruel treatment, but rallied to remain steadfast in Christ til the very end.
After more than a year of imprisonment, the group was sent to Nagasaki to be tried.  Of course the "trial" proved to be just a farce.  The captives were promised freedom if only they would renounce Jesus, to which Lorenzo bravely replied:
“I am a Christian and this I profess,
and although I did not come to Japan to
become a martyr I am now willing to
give up my life for God.  You can do with
me whatever you please.”
Because he refused to apostatize, on September 27, 1637, Lorenzo was subjected to a form of torture the Japanese called tsurushi – his body was tightly bound with rope and hung upside down over a pit filled with filth while small cuts were made on his head through which his blood slowly dripped.  It was a particularly long and agonizing way to die. 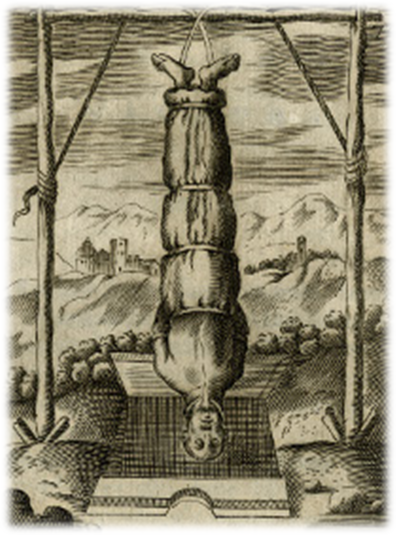 The cruel manner in which St. Lorenzo died.

Lorenzo succumbed to the torture after two days, thus, successfully earning the glorious crown and palm of the Christian Martyrs.  He was 42-years-old.
On October 18, 1987, Pope John Paul II recognized Lorenzo Ruiz, along with 15 other Martyrs of Japan, as official Saints.  Thus, giving Lorenzo the distinction of being the first ever canonized Filipino.
St. Lorenzo, pray for the needs of the
universal Church and especially for your
fellow countrymen.  Help us to also
remain steadfast in Christ.  Amen.
Peter @ Guadalupe House Ministry, Honolulu No comments:

An Affirmation from our Heavenly Mama?

The FIAT: Faith In Action Today Group at my parish of St. Anthony of Padua in Kailua is coming up on its third birthday next month... and a handful of our members continue to safely meet, in-person, despite the ongoing Covid-19 pandemic.  Taking Our Lady as our premier role-model in living the Divine Will of God, we consecrate ourselves to her Immaculate Heart at the end of each meeting.
Snapped from the church parking lot just minutes before the start of a FIAT Meeting, is the photo shown below encouragement from our dear Blessed Mother? 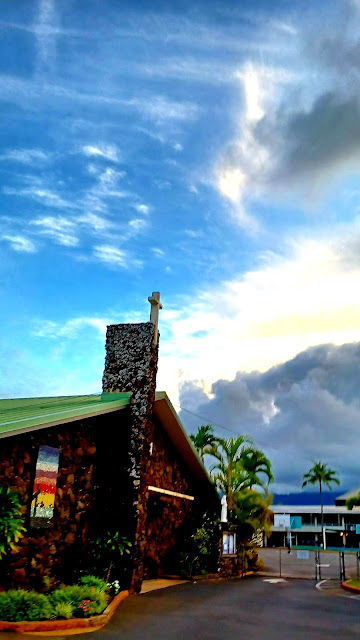 NOTE:  When the photo was taken, the
figure was not visible - this author just wanted
to capture the beauty of the evening sky. 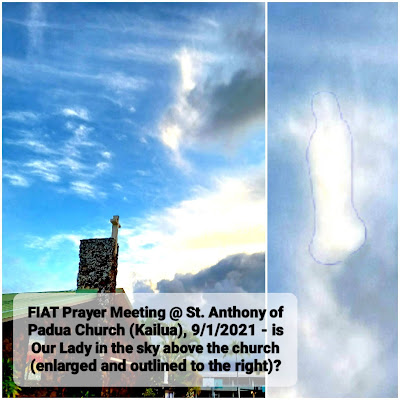 FIAT Consecration Prayer to Our Lady
O Mother Mary, Queen of Heaven, whose Fiat was the dawn of the world’s salvation, I consecrate myself to your Immaculate Heart, invoking your special guidance this day, as I strive to follow your example of complete trust and surrender to the Divine Will of God.
Assist me in my efforts to live the way of your Fiat and obtain for me from your Son – our Lord, Jesus Christ – the grace of deeper union with God so that, in all I do, His Will may be accomplished through me.  And, thus, transformed into a beacon of light against the darkness of this world, may I serve to draw others to His Kingdom.  Amen.
Our Lady, Queen of the Divine Will,
pray for us!
Peter @ Guadalupe House Ministry, Honolulu No comments: