Monthly Message of the Queen of Peace of Medjugorje: December 25th, 2020

The Monthly Message:
"Dear Children!  I am carrying to you little Jesus who brings you peace, Him who is the past, present and future of your existence.  Little children, do not permit for your faith and hope in a better future to be extinguished, because you are chosen to be witnesses of hope in every situation.  That is why I am here with Jesus that He may bless you with His peace.  Thank you for having responded to my call."
A special message received by Jacov Colo during his annual apparition on Christmas Day:
"Dear Children!  Also today Jesus is here beside you, even when you think that you are alone and that light does not exist in your life.  He is here and has never left you or distanced Himself from you.  The light of His birth illuminates this world and your life.  His Heart is always open towards you, to receive your every pain, every trial, fear and need.  His arms are extended towards you, that as a father, He may embrace you and tell you how important you are for Him, how much He loves you and cares for His children.  Children, is your heart open towards Jesus?  Have you completely surrendered your life into His hands?  Have you accepted Jesus as your father, to whom you can always turn and in Him find consolation and everything you need to live true faith?  That is why, my children, surrender your hearts to Jesus and permit Him to begin to rule your lives, because only in this way, will you accept the present and be able to face the world in which you live today.  With Jesus, every fear, suffering and pain disappear, because your heart accepts His will and everything that comes into your life.  Jesus will give you the faith to accept everything and nothing will distance you from Him -- because He firmly holds you by the hand and does not permit for you to distance and lose yourselves in difficult moments -- because He has become the Lord of your life.  I bless you with my motherly blessing."
Peter @ Guadalupe House Ministry, Honolulu No comments: 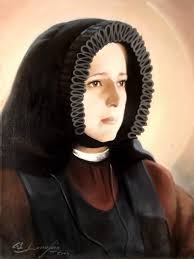 St. Paola Elisabetta Cerioli
Charitable Mother of Many - Feast: December 24th
Our December Saint is another female Founder and she hails from a large noble family of Soncino, Italy.   She was born on January 28, 1816 and, because of precarious health (she had a lifelong heart condition), was baptized just a few days later on February 2nd as Costanza Honorata Cerioli.  In her childhood, the future Saint was educated by Visitandine Nuns and was endowed with an innate sensitivity to the needs of the poor and infirm.
At the tender age of 19, Constanza's parents accepted on her behalf an offer of marriage from a Gaetano Busecchi, the wealthy widower of the late Countess Maria Teresa Tassis.  The suitor was 40 years their daughter's senior and, despite her initial resistance, Constanza relented to pressure and was married to Gaetano on April 30, 1835.  The reluctant new bride could only pray and trust that it was all part of God's master plan for her.
The marriage was awkward, at first, but Constanza learned to sincerely love her husband despite their vast age difference and his set ways.  She submitted herself completely to her marital duties and Gaetano, on his part, loved her back.  In fact, the couple had four children of which three died in infancy.  In January 1854, her last surviving son - Carlo - was also taken from her at the youthful age of 16.  A few days before his passing, the boy made a thoughtful attempt to comfort his grieving mother by stating to her: "Mamma, don't cry.  The Lord will give you other children."  It was a statement that later proved to be highly prophetic.
Less than a year after losing Carlo, Constanza's husband followed their son to the grave on December 25, 1854, leaving our Saint a widow at 38-years-old.  Grieving and lonely over her successive losses, she found solace in her Catholic Faith; having inherited Gaetano's palazzo and wealth and, inspired by the Gospel precepts, she resolved to use her resources for the good of others. 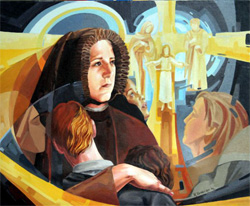 St. Paola Elisabetta desired her Sisters to imitate the virtues of the Holy Family.
Contrary to the expectations of her family and friends, Constanza did not remarry.  Instead, she pronounced private vows of chastity and adopted two orphans before launching various charitable endeavors that included opening her home to the sick and the poor, and establishing a free girl's school in rural Comonte di Seriate in Bergamo.  Costanza was assisted in her mission by a small group of dedicated female collaborators and they were enthusiastically supported by their local Bishop.
Beginning in late 1857, the next seven years was a period of rapid development and expansion for the group's ministry...
+ December 8th, 1857 - the Feast of the Immaculate Conception:  Costanza and her companions established themselves as the "Institute of the Sisters of the Holy Family"
+ January 23, 1858:  Costanza takes the religious name of "Paola Elisabetta"

+ July 8, 1858:  Mother Paola Elisabetta and her companions were solemnly clothed in their new institute's habit

+ January 23, 1859:  The foundress and the first five Sisters of the Holy Family made their temporary religious profession

+ June 27, 1862:  The Institute of the Sisters of the Holy Family of Camonte received the formal decree of approval from Mons. Speranza, Bishop of Bergamo
+ November 4, 1863:  The male branch of the Holy Family was established in Cremona
Under the protective patronage of St. Joseph, head of the Holy Family, to whom Mother Paola Elisabetta was especially devoted, her work thrived and spread to other regions of Italy; more schools were opened, along with homes for charitable services and evangelization.  As her dear son, Carlo, had predicted, the once lonely widow had indeed become the mother of other children... lots of them!
On December 24, 1865, the foundress unexpectedly died at the age of 49 in Comonte.  Mother Paola Elisabetta's personal sanctity and legacy of selfless giving ensured she was not forgotten by the many people she impressed in her lifetime; the Diocese of Bergamo opened her Cause for Canonization in February 1902, which culminated in the Church declaring her a Saint on May 16, 2004. 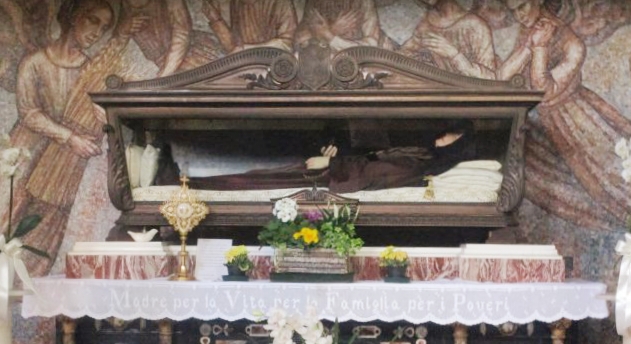 Above:  The urn containing the holy remains of St. Paola Elisabetta.
Below:  A relic of the Saint's clothing in this ministry's custody. 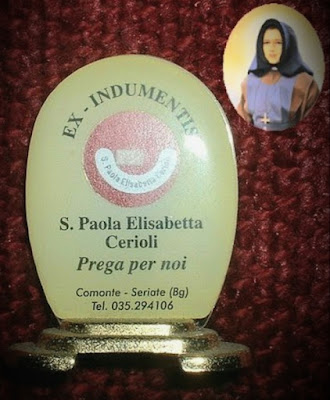 Today, the Saint's bodily relic is conserved and venerated in a church dedicated to her honor in Bergamo, Italy.
St. Paola Elisabetta Cerioli,
pray for us!
Peter @ Guadalupe House Ministry, Honolulu No comments:

Last week I had another vivid dream - a striking one - which both terrified and inspired me.  I felt there was an urgent, underlying message in it for everyone and, after mulling over it for several days, I decided to post about it, at least part of it...
In my dream, I saw a massive group of "beings" - an army, more like - who seemed to be completely made of light.  One, in particular, caught my attention - despite his brilliant "aura", I was somehow able to make out most of his features: he looked to be about 18 to 20 years old; handsome with thick, long light blond hair; a golden diadem with a blue triangular centerpiece rested on his forehead.  He wore a dazzling white robe.
Despite his youthful appearance, I felt an immense POWER emanating from this person; his force was further manifested, via light that seemed to illuminate him from the inside out.  It was so intense, it shown from his eyes and mouth like a glow whenever he blinked and opened his mouth.  Because of this internal light, I could not discern the color of his eyes.
I wondered to myself who this being could be but it was only after he spoke that I was firmly convinced of his identity - focusing his piercing gaze at something at a distance, he shouted with a deep booming voice, tinged with indignation:
"WHO IS LIKE GOD?!"
I knew then it was St. Michael, the Archangel... and I was like "WOW!"; impressed and in complete awe over his persona... and his splendor seemed to increase even more immediately after he spoke!
I would never have guessed it was the archangel because the being I saw did not resemble anything like the traditional images of St. Michael we're used to seeing with armor, a sword, wings (curiously, I didn't see any), and dark wavy hair, etc.  It made me even more intrigued.
I'll end here with the dream description... but, personally, I have a sense of what all the imagery was intended to convey - it was a challenge - a battlecry - directed at the enemies of God, as well as, a foreshadowing of a dramatic escalation of the ongoing spiritual war between Good and Evil, which I'll leave to the reader to discern, or to dismiss.  Either way, it doesn't matter to me what others think.  I've already decided on my response to all of this - whatever happens, I stand with St. Michael.
... so fast forward to today.  I'm still quite taken by this entire experience and had to put something down on paper because I don't want to forget it.  The drawing below is the result of a 7 hour effort to record, as close as possible, what I recall... although, honestly, it doesn't do any justice to the real deal.  But how can one ever draw on paper a creature made of light?  Anyway, for obvious reasons, I chose to title this latest artwork of mine, "Who Is Like God". 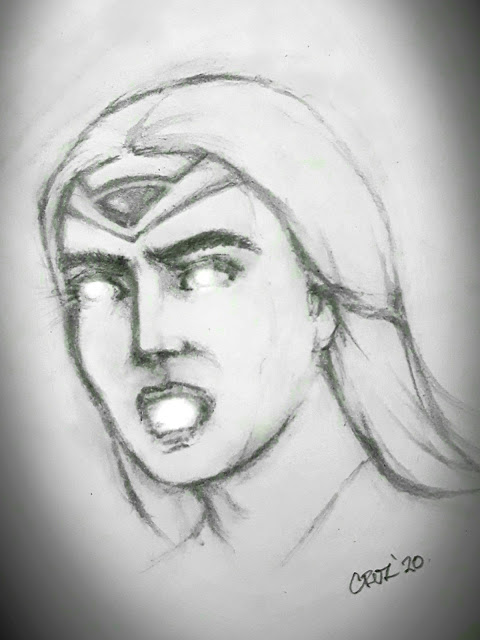 Dream, vision, or mere imagination, something in me has changed concerning St. Michael.  I feel as though I caught a small glimpse of the magnitude of his role as leader of the Heavenly Army.  As I stated earlier - the archangel has POWER and, we, the People of God, should feel assured and happy that we have him and all the other Holy Angels fighting on OUR side.  They/We will win one day.
So now, when I pray the St. Michael Prayer each day, I do so with a newfound devotion and respect for St. Michael; deeply personal.  He rightfully deserves the veneration and respect the Church has shown him for centuries.  St. Michael, pray for us!
St. Michael, the Archangel,
defend us in the day of battle.  Be
our safeguard against the wickedness
and snares of the devil and, do thou,
O Prince of the Heavenly Host, by the
power of God, cast into hell Satan and
all the evil spirits who prowl
through the world seeking the
ruin of souls.  Amen.
Stand with St. Michael!
Peter @ Guadalupe House Ministry, Honolulu No comments: