Monthly Messages from the Queen of Peace of Medjugorje: February 2014 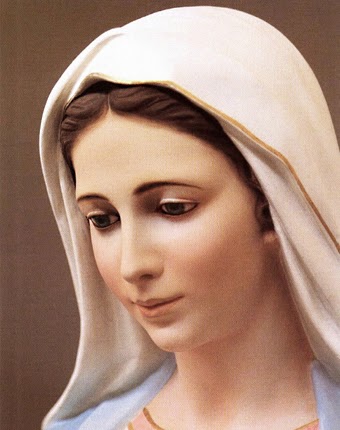 Our Lady's Monthly Message to the World on February 25th:

"Dear children!  You see, hear and feel that in the hearts of many people there is no God.  They do not want Him, because they are far from prayer and do not have peace.  You, little children, pray - live God's commandments.  You be prayer, you who from the very beginning said 'yes' to my call. Witness God and my presence and do not forget, little children: I am with you and I love you.  From day to day I present you all to my Son Jesus.  Thank you for having responded to my call."

Our Lady's Special Message to Mirjana on February 2nd:
"Dear children, with motherly love I desire to teach you sincerity, because I desire that, in your actions as my apostles, you be exact, resolute, and above all sincere.  I desire that, by the grace of God, you be open for a blessing.  I desire that by fasting and prayer you obtain from the Heavenly Father the cognition of what is natural and holy – Divine. Filled with cognition, under the shelter of my Son and myself, you will be my apostles who will know how to spread the Word of God to all those who do not know of it; and you will know how to overcome obstacles that will stand in your way.  My children, by means of a blessing, God's grace will descend upon you and you will be able to retain it through fasting, prayer, purification and reconciliation.  You will have the efficiency which I seek of you.  Pray for your shepherds that the ray of God's grace may illuminate their ways.  Thank you."

Powerful... simply powerful on so many levels. That's the best way to describe last night's Rosary Prayer Meeting at my friend, Dre's, house.

First off, even before we began our prayers, we were blessed by the manifestation of golden escarchas on a dining room table around which we sit during our meetings.  Significantly, they appeared while we were discussing the history of the Rosa Mystica apparitions so I interpreted the escarchas as a sign of the spiritual presence of our Blessed Mother with us.  Also, during the actual prayer time, the presence of the Holy Spirit was quite tangible; we felt His power moving among us, and through us... and we were privileged to witness the emotional healing of a couple of returning participants who were carrying deep-seated hurt in their hearts. 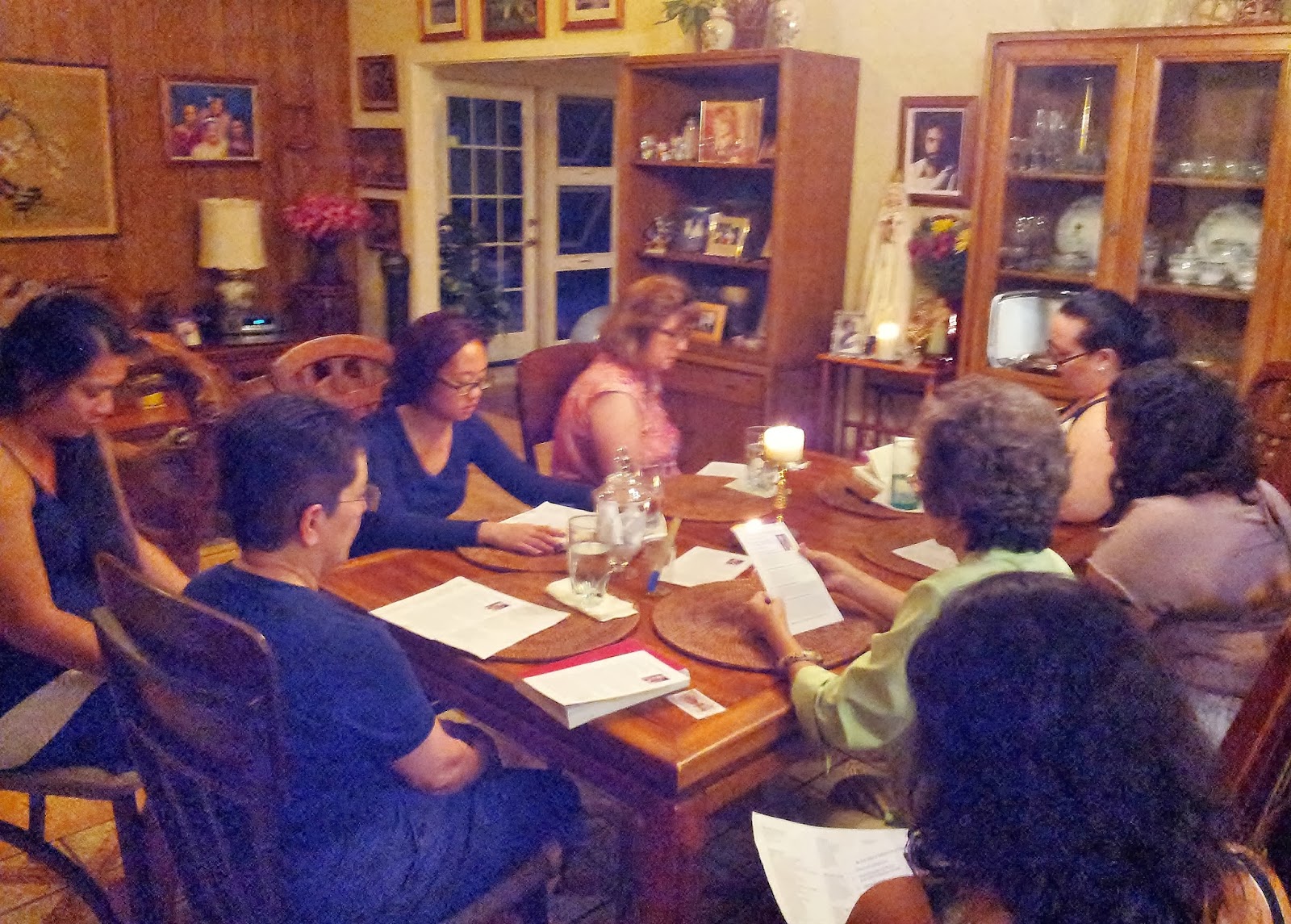 Participants, gathered together in prayer before the little devotional
altar in the home of the Gruber family.

In addition, we were joined by two new participants who made the prayer meeting even more special.  One of the new participants is the young daughter of one of our regular group members and she happens to be very active with her parish's large youth group, which got us even more fired-up.  When it comes to young people, we are enthusiastic in trying to help them experience the love and spiritual embrace of the Lord and Our Lady; all in the hopes that it will draw them to a deeper and lasting faith-relationship with God. After all, the youth will one day be our future and it gives me hope for a brighter tomorrow when I see young people seeking after the Lord.  So I'd like to encourage viewers who read this blog to also pray for the spiritual well-being of children and young adults throughout the world. 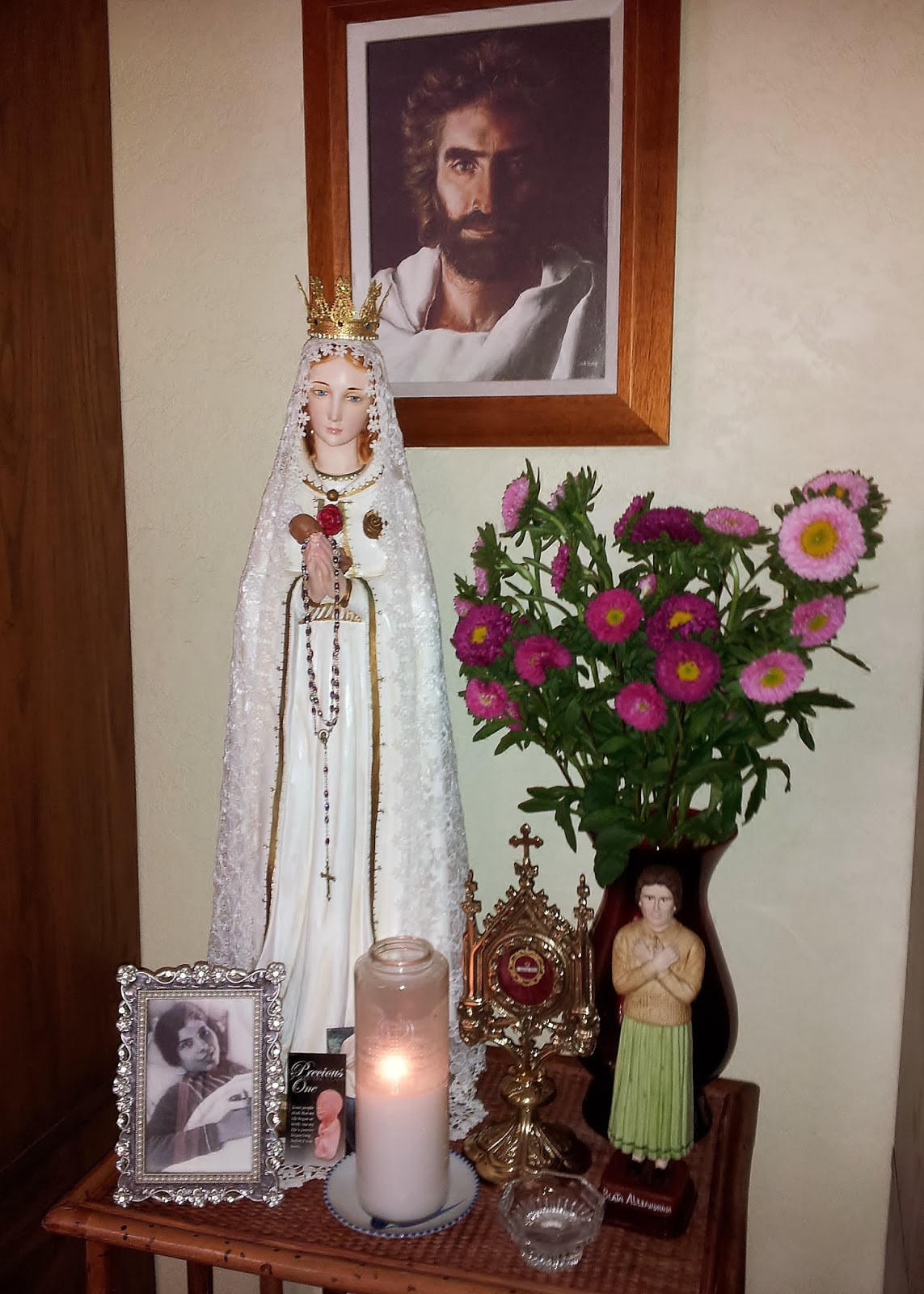 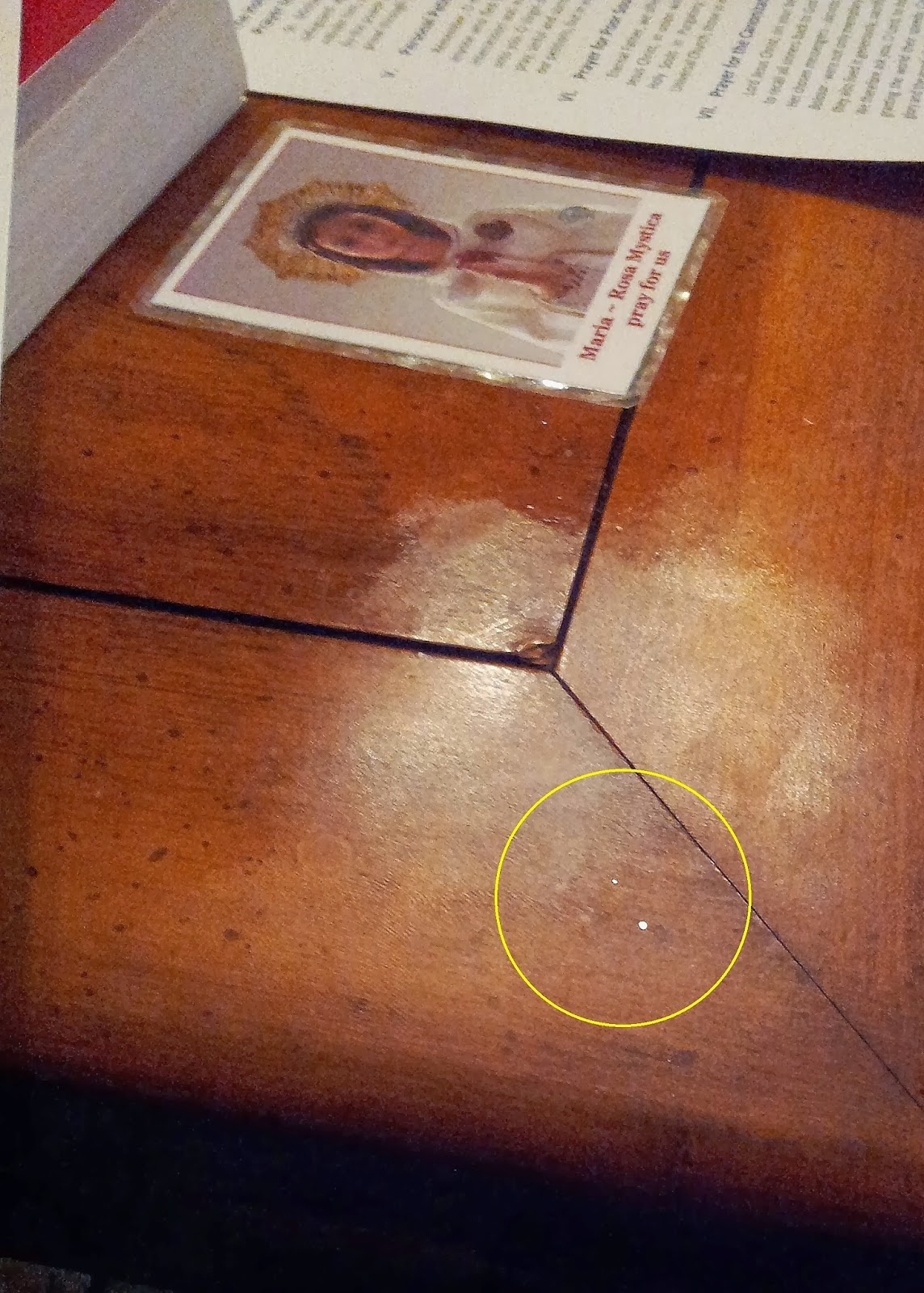 Golden escarchas (some circled in the right photo) appeared, as we discussed
the background story of the Rosa Mystica pilgrim statue on the family's altar.

And finally, after our prayers were finished, the rest of the evening was occupied by a Korean-themed Potluck. We had much to celebrate - several recently answered prayer petitions - and our fellowship dinner was a great way to do it. Among the array of delicious food we feasted on were Kim Chee, Chop Chae, Kalbi, Spicy Chicken Wings, and Mandoo. We even had a few sips of strawberry-flavored Soju (Korean rice wine), which was the perfect nightcap for the evening!

Even now, as I write this particular posting, I can still sense the grace of the Holy Spirit... that's how powerful last night's prayer meeting was, and I am humbled and grateful.  All thanks and praises be to God always!

Another interesting article about Sacred Relics...

The article shown below about Relics was recently published by La Stampa, which I believe is an Italian-based magazine. It makes some really good points about the Church's Devotion to Holy Relics, although I don't agree with the article's use of the word, "worship"... which the Church obviously doesn't do when it comes to anything else but God. I think it was just a matter of poor translation. 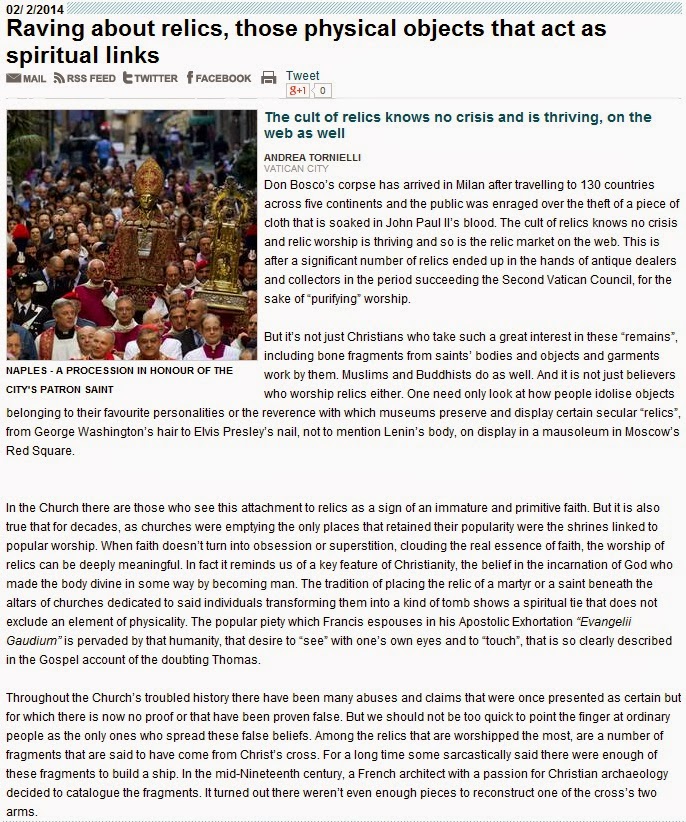 NOTE:  I believe the relics pictured in the above article are those belonging to
St. Januarius, Bishop & Martyr (d. circa 305).

It was just a smaller group that came together yesterday evening... but, none the less, our parish's monthly Rosary Meeting was still very meaningful; we prayed fervently, and as we prayed for peace, we couldn't help but think of Russia and threats being made against the Winter Olympics by terrorists.  May there be peace during these international games and we prayed that no harm will come to the athletes and tourists who go to participate in the festivities.

At the same time, we paid special honor to an obscure Beata - Bl. Helena Stollenwerk (d. 1900, left photo) - the German co-founder (with St. Arnold Janssen, d. 1909) of the Sister Servants of the Holy Spirit. The lesson we learned from the life of this holy woman was to be open to God's plans for us. In her life, Bl. Helena yearned to serve the Lord by being a missionary in China, but she never got the opportunity. In fact, a few years after she founded her congregation, she was asked to leave it in favor of joining a new contemplative branch of the congregation that St. Arnold also founded - the Servants of the Holy Spirit of Perpetual Adoration.

Despite a measure of sadness and disappointment, she bowed to God's Divine Will and did as she was asked; sacrificing her life's dream of becoming a missionary... yet invigorating the fledgling congregation with her deep faith and profound love for our Eucharistic Lord. I think we can all identify to a certain degree with the interior struggle and dismay that Bl. Helena must have gone through. But we can also find hope in knowing that if we trust in God, as she did, all will work out for the good of our souls and others.

In the end, it was encouraging to see several parishioners - including a new participant with a walker apparatus - approach the makeshift display altar to pray to Our Lady and Bl. Helena, whose precious relics were displayed for viewing.  I could sense the faith and the near-urgency that these people gave off as they made their private prayer petitions.  God bless them and may our Blessed Mother and the Bl. Helena intercede for them.

Our next Rosary for Peace Devotion will be offered on Saturday, March 1st, 2014.  All are welcomed to participate. 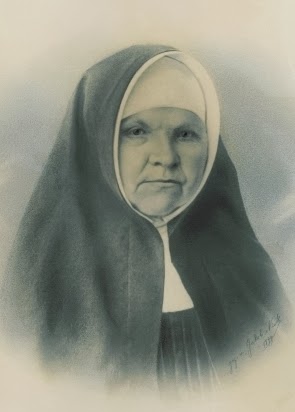 On May 26th, 1820, a little blessing descended upon the humble Kasper family of Dernbach, Germany. The blessing was in the form of a newborn baby who they named "Katharina", and from a tender age, she showed signs of being truly sent from Heaven.

Young Katharina grew into early adulthood being naturally devout, kind, and generous in spirit.  In her later years, the future foundress once admitted, "I had a preference for religion and reading and did not care for anything else." Motivated by her deep faith in Jesus and the Blessed Virgin Mary, she resolved to consecrate her life completely to God. This consecration was practiced through charitable service of the poor, and also through the care of the sick in her community in which she established a pious reputation for being a go-to person whenever one was in need of help or prayers.

Katharina's example attracted four close companions, and together, they formed the nucleus of what eventually evolved and grew into a religious congregation - the Poor Handmaids of Jesus Christ.  The small group of women established a "little house" and pronounced religious vows on August 15th, 1851, after which they elected Sr. Maria (Katharina Kasper) as the mother-general of the newly founded congregation.  In their humble dwelling the "handmaidens" welcomed widows, orphans, and the infirm; caring for them and assisting with their various needs. The following prayer, offered by the foundress gives us a brief glimpse into the goodness of her soul:

"Give me, O Lord, a strong will and perceiving zeal to live and work
according to all the principles of our Holy Faith."

Guided by Mother Maria’s strong, capable leadership and faith the little community quickly grew and expanded its charitable ministry to include the Christian education of children. The congregation was officially recognized by the Church in 1870, and when Mother Maria died on February 2nd, 1898, the Poor Handmaids were successfully operating throughout Germany, Austria, England, Holland, and North America.

"Let us thank our loving God continuously.  Nothing is a matter of pure chance;
everything comes from the Most High."

Mother Maria Katharina Kasper was declared a Saint during a Canonization Ceremony in Rome on October 14, 2018, and her Feast is lovingly observed by the Poor Handmaids on February 2nd of each year.  May the Lord grant them, and the entire Church, the benediction of St. Maria Katharina's charism and intercession.

A Short Prayer
Dear St. Maria Katharina, pray for us that we, like you, may come to clearly recognize Jesus, hidden in the guise of the sick and the needy of the world.  Amen.

NOTE:  This post was originally published in February 2014 but was updated in October 2018 to reflect St. Maria Katharina's current status as a Saint.