Dear Blessed Mother, why do you weep? 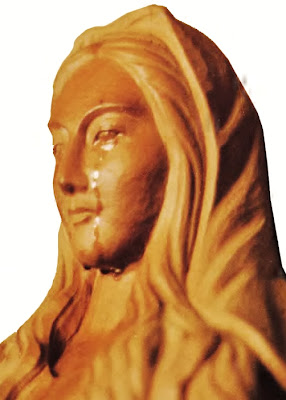 "The thought of the loss of so many souls is the
cause of my sadness."

An acquaintance from Canada recently emailed me with a question: Why does Mary cry tears?  Why does she cry tears of blood? [referring to weeping Marian statues]  At first thought the answer seemed simple enough - Mary is very sad and the statues are being used by God as instruments to reflect the Blessed Mother's sentiments.  But as I pondered more about it, I realized that there's much more to the phenomenon than meets the eye - there are actually layers of prophetic messages that are often related to specific circumstances surrounding a weeping image... the type of tears the image sheds (regular tears, blood, or oil)... or even the type of statue that is weeping. 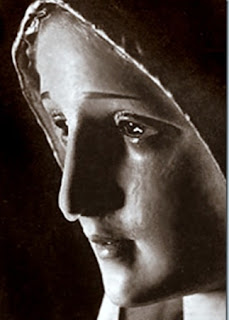 To give an example...  a credible report of a weeping statue occurred in 1972, with the world-famous International Pilgrim Virgin of Fatima (left) that was witnessed by large crowds to weep human tears in Louisiana.  A few years later in 1978, the same statue again wept... but in the second occurrence, it did so in Las Vegas, Nevada.  How significant that this statue - a tangible representative of the Fatima Message of Conversion, Prayer, and Sacrifice - has traveled the entire United States only to weep so copiously in two areas in our country that are well-known for unrestrained hedonism.  New Orleans and its notorious Mardi Gras is in Louisiana, and we all know that Las Vegas capitalizes on the fact that it's popularly nicknamed the "Sin City".  The locations in these two separate cases involving this miraculous statue were definitely prophetic factors as to why Our Lady shed tears.

In regards to the type of tears, the sight of a statue weeping normal, watery tears must be impressive enough and effectively conveys a sense of sadness, and perhaps even frustration... but to see bright red blood streaming from a statue's eyes must be downright upsetting and probably a little frightening.  Surely, bloody tears bear a much greater weight compared to normal tears... and I believe they express something much more serious - a terrible pain in Our Lady's Immaculate Heart caused by the fact that she knows what self-imposed chastisements are headed our way, but hardly anyone is paying her messages - or more importantly, her Divine Son - any serious attention.  This brings to mind what was shared with me over a decade ago by an elderly lady-friend from the island of Maui (now deceased) who was a reputed mystic/visionary.  Her name was "Christina" and we became quite close friends, and I personally believed she was the real deal. 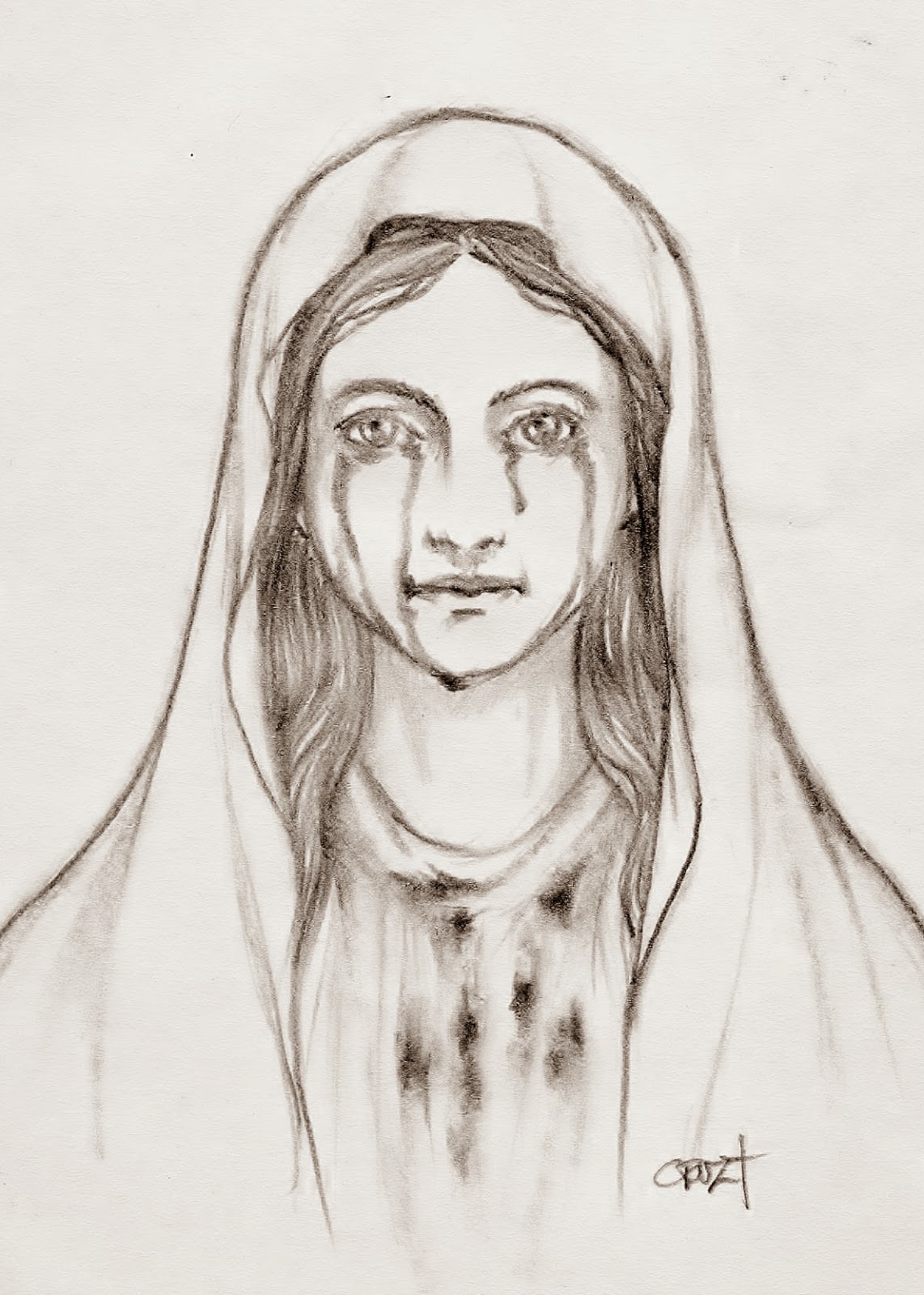 I visited with Christina at her home four times, and during my last visit with her in 1998, she confided to me and my friends that the Blessed Mother had recently appeared to her in a manner that was personally distressing to the seer. Our Lady was weeping quietly, which up to that time my visionary-friend had never seen her do... so she asked her the reason behind the tears and Mary responded, "Christina, you need to pray... and tell others to pray more."  Immediately, Christina was given a vision of a great disaster that would one day hit the United States and which would also end up affecting the Hawaiian islands. At that same moment, the Holy Mother's tears became blood, that streamed down her cheeks and fell upon her white dress causing dark red stains.  The seer admitted that when she saw the Virgin's regular tears, her heart was filled with sorrow and compassion... but when she saw them transformed into blood, she was terrified and the impression it made on her was heartbreaking and indelible; Christina knew it was a dire warning that Our Lady was communicating and emphasizing to her, and she was deeply troubled by the experience.

To this day I have never forgotten the somber expression that was reflected on Christina's face as she mentally relived her vision all over again while sharing it with our small group; the look of anguish was evident... but there was also a glimmer of hope as she encouraged us to keep praying the Holy Rosary.  Clearly, the Virgin's tears of blood mean something much, much more serious. I drew the image of the weeping Madonna that's seen above, based on my personal recollection of Christina's description of Our Lady's sorrowful appearance to her. I find my own drawing somewhat disturbing so I can just imagine what Christina felt when she saw the scene in person.

In contrast, while tears of water and blood express sorrow and pain, effusions of fragrant oil (in my humble opinion) are a blessed gift from God especially meant for the healing and spiritual encouragement of the Faithful.  In Sacred Scriptures, the use of blessed oil was a method of consecrating something for a holy purpose, as well as being used as a healing agent:

"Is anyone among you sick? Let him call for the elders of the church,
and let them pray over him, anointing him with oil in the name of the Lord."

There are dozens of statues and other images throughout the world today that are exuding oil with healing properties.  Two credible examples are the many weeping images associated with the late-mystic - Audrey Marie Santo (aka "Little Audrey") and the ongoing weeping icon of Our Lady of Soufeniah in Syria, owned by the visionary, Myrna Nazour.  Incidentally, both women were Stigmatized with the marks of Christ's wounds. 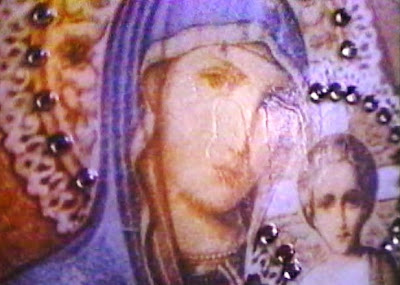 The oil-weeping icon of Our Lady of Soufanieh in Syria. Countless cures
have been attributed to the oil from this Church-approved miracle.

Even the type of statue is highly significant when it comes to the weeping statue phenomenon; again, I refer to the message of Fatima.  Our Lady's appearances in Fatima are arguably the most important of all approved Marian Apparitions, given the global scope of the messages, the miracle of the "dancing sun" witnessed by thousands, and the prophecies that have since been accurately fulfilled. During my years of research, many of the statues that have wept were representations of Our Lady of Fatima.  Undoubtedly, the Lord and his Holy Mother are making an important statement - heed the messages that were given at Fatima!  ... but in the past 30 years, there has been another type of Marian statue that has been gaining ground in the area of inexplicable tears and mystical phenomena - the Rosa Mystica!

Statues of Our Lady of Fatima that have wept
in different parts of the world... the one below was
recently witnessed in Fiji in early 2019.

The sheer number of Rosa Mystica statues reportedly weeping around the globe cannot be ignored.  To date, in my estimation, there have been 130+ such images that have wept or are currently shedding tears of water and/or blood (plus manifesting Escarchas!) in churches and in private homes around the world.  Truly, the Lord is also trying to draw peoples' hearts to the messages that his holy mother delivered at Montichiari/Fontanelle; messages that expanded on the Fatima theme and lamented fallen away clergy and religious, while also calling for prayers for holy vocations.  Only now are we realizing the full prophetic impact of Our Lady's words in the Rosa Mystica revelations - the Church and the world are in urgent need of good priests and nuns... and vocations to the consecrated life have drastically decreased in the last few decades.

Weeping Rosa Mystica statues from around the globe.  They are the most
prolific weeping images reported in the world today.

In conclusion, when dealing with alleged mystical phenomena, I cannot emphasize enough the need for much prayer and discernment.  As seen in the many photos in this blog, the phenomenon of weeping images is real and it has increased in recent years... but this blog isn't intended to endorse all purported weeping images as genuine, as obviously, there have been hoaxes perpetrated in this regard.  The Church is always the best guide in weeding out true miracles from false ones...  and there have actually been a handful of weeping statues in modern times that were granted full approval by local Bishops after careful discernment and investigation.

The few cases that were officially recognized as authentic miracles are enough to merit our attention to Our Lady's unceasing call for Conversion, Prayer, and Penance... and also Peace and Reconcilation among all peoples.  For us to disregard these obvious signs would simply be irresponsible, as well as ungrateful towards God and our Blessed  Mother for their extraordinary expression of concern for us.  We are now living in precarious times and the manner in which we respond will be critical to our future.  Please just think about it.

"I tell you," he replied, "if they [his followers] keep quiet, the stones will cry out."