The Sojourn in the Desert

"Jesus, full of the Holy Spirit, left the Jordan and was
led by the Spirit into the wilderness, where for forty days
he was tempted by the devil.  He ate nothing during
those days, and at the end of them he was hungry."
‐ Matthew 4:1-2

The Lenten Season is always an intense and meaningful time for me and I think it's the reason why I had another vivid dream, which haunted me for several days.  It happened last week but I only recently decided to put it down on paper because of how impressed I was by it.  The drawing below, which I call "Sojourn in the Desert", is the end result.

So in my dream I found myself immersed in a desert.  It was night time but the light of the moon was unusually bright and I could clearly see the rocky landscape (it reminded of the Grand Canyon). Wandering around for a bit I came upon a wide ravine and an amazing sight... 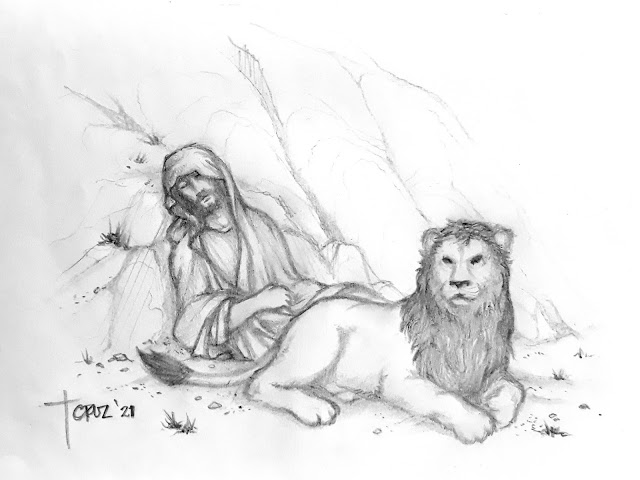 There, ahead of me, was a large cat.  It was definitely a lion but with a weird-looking mane, which to me, looked too short. Behind the animal was a man leaning against a few boulders and I sensed almost immediately it was our Lord... and he looked haggard.
Poor Jesus - he was fast asleep and looking so lean; I heard him lightly snoring, too!  I was saddened because I could see that he was obviously weak and exhausted; worn out.  On his head, covering his brow, was a cloak that flowed down and wrapped tightly around his body so it must've been chilly although I couldn't feel the cold.  At that very moment, seeing Christ this way gave me a solid visual of how human he truly was; how, despite being Divine, he didn't exempt himself from any of the physical weaknesses and discomforts the rest of us mortals are subjected to: hunger, fatigue, cold, snoring, etc.  It was also somehow endearing.
For we do not have a High Priest who cannot
sympathize with our weaknesses, but was in all
points tempted as we are, yet without sin.
‐ Hebrews 4:15
... but what made this dream especially intriguing for me was not just the imagery of the Lord fasting in the desert, which I'm already familiar with... rather, it was the lion.  I know Jesus is referred to as the "Lion of Judah" because of Revelation 5:5 and Mark 1:12-13 mentions him as being "among wild beasts" in the wilderness... but I've never read or heard anything specific - anywhere - about an actual lion keeping him close company in the desert.  Where in the maze of my brain did that come from?  What was it supposed to symbolize, if anything?
Furthermore, although the lion looked quite formidable, it showed no signs of aggression.  Instead, it just lay quietly beside Jesus - like an oversized pet kitty - in direct physical contact with his legs.  Based on my observations, I speculate that the lion was really keeping Christ warm, as well as, watching over him as he slept.  After thinking about it over and over, it kinda made sense, considering all the potential dangers lurking in the wilderness: venomous scorpions and snakes; bandits; and even other lions.  A lion would make for an ideal guard animal in Jesus' situation.
I lay down and slept, yet I woke up in safety,
for the Lord was watching over me.
– Psalm 3:5
Incidentally, I did online research, afterwards, about lions in the Middle East and discovered there was a species of big cat - the Asiatic Lion - that is still found there... and guess what?  Male Asiatic Lions have a physical trait that distinguishes them from their African counterparts - shorter manes... like Jesus' furry bodyguard in the desert!  Now that's what I call uncanny. 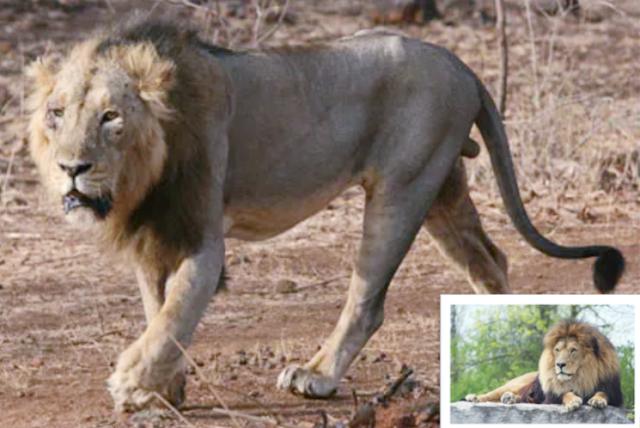 The Asiatic Lion - note its short, sparse-looking mane compared to the
African Lion (inset), which is a more familiar image of the big cat.
Peter @ Guadalupe House Ministry, Honolulu