Monthly Messages from the Queen of Peace of Medjugorje: February 2013 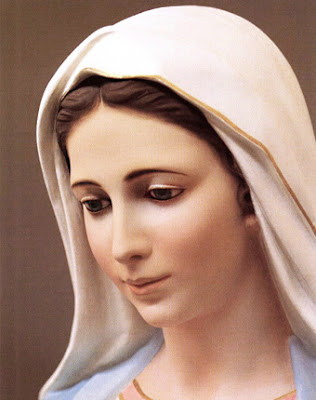 Our Lady's Monthly Message on February 25th:
"Dear children! Also today I call you to prayer. Sin is pulling you towards worldly things and I have come to lead you towards holiness and the things of God, but you are struggling and spending your energies in the battle with the good and the evil that are in you. Therefore, little children, pray, pray, pray until prayer becomes a joy for you and your life will become a simple walk towards God. Thank you for having responded to my call."
Our Lady's Special Message to Mirjana on February 2nd:
"Dear children, love is bringing me to you - the love which I desire to teach you also - real love; the love which my Son showed you when He died on the Cross out of love for you; the love which is always ready to forgive and to ask for forgiveness. How great is your love? My motherly heart is sorrowful as it searches for love in your hearts. You are not ready to submit your will to God's will out of love. You cannot help me to have those who have not come to know God's love to come to know it, because you do not have real love. Consecrate your hearts to me and I will lead you. I will teach you to forgive, to love your enemies and to live according to my Son. Do not be afraid for yourselves. In afflictions my Son does not forget those who love. I will be beside you. I will implore the Heavenly Father for the light of eternal truth and love to illuminate you. Pray for your shepherds so that through your fasting and prayer they can lead you in love.  Thank you."﻿ 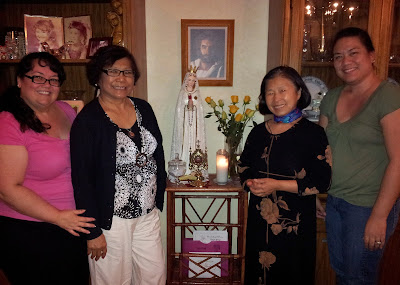 
Being that we're in the middle of Lent 2013, our prayer night was heavily focused on conversion - our personal efforts at being better Christians, as well as for the conversion of sinners throughout the world - and it just seemed highly providential the our Scripture Reading, Matthew 5:38-48... the Medjugorje Message we reflected on... and our featured Saint - St. Margaret of Cortona (d. 1297) - all came together as a single cohesive message encouraging us to repentance, reconciliation with God and with people who have hurt us... and finally, to share the LOVE that God has generously planted  in our own hearts with others, especially those who have need of love themselves. 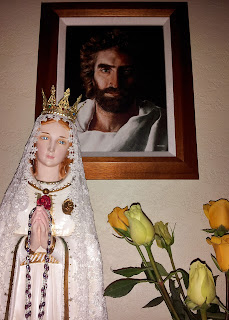 A few of our regular participants weren't able to join us this evening, but we did have the joy of welcoming a new Sister in Christ to our prayer family - a dear coworker of both me and our host, Dre'.  After several months of inviting her, she was finally able to pray with our little group and bless us with her own personal insight and prayers.  She shared with us after the prayer time that she felt the "Love"... and I was happy for her because I completely understood what she was talking about.
Judging by what I saw in people's faces, I think we all left the Gruber home last night feeling a little less "broken"... and encouraged in our efforts to continue moving forward on our personal faith-journeys with Christ.  May Our Lady and St. Margaret pray for us.


"Show now that you are converted; cry out and call others to repentance.
The graces I bestowed on you are not meant for you alone."

~ Words of Our Lord to St. Margaret of Cortona
Peter @ Guadalupe House Ministry, Honolulu No comments: 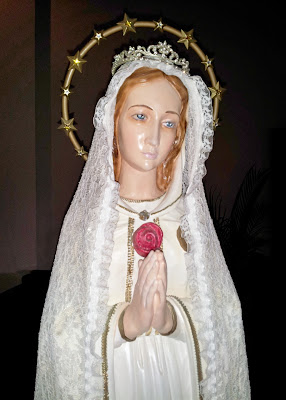 God never ceases to wow me... His goodness is beyond measure. Today's First Saturday Rosary for Peace at my home parish of St. Anthony's Church in Kailua was well-attended by parishioners and visitors, and followed-up with wonderful testimonies.

For one, we welcomed three new faces to our monthly Rosary Prayer, including a non-Catholic Brother in Christ all the way from the Leeward coast of Oahu, who has been open to new faith-experiences. He was invited to attend the Rosary by a friend.... and when he came to the Mass afterwards, he was amazed when the Scripture reading turned out to be completely relevant to a personal situation going on in his life right now. Since I don't believe in coincidences when it comes to matters of faith, I really believe the Lord was trying to get his attention today.

In addition, another participant who just started attending our prayer meeting regularly a few months ago, was also impressed by a fragrance of roses that suddenly "hit" her when she walked into St. Anthony's Day Chapel during our prayer time; there were no roses present anywhere in the chapel... and as far as I am aware, no one else smelled it. Again, I think Heaven was trying to get her personal attention, as well.

Finally, the life of our Saint of the Month - St. Maria de Mattias, the Italian Foundress of the Sister Adorers of the Blood of Christ - surprisingly attracted unusual attention, with several participants being drawn to her blessed relic after the Rosary Prayer meeting ended. They seemed very impressed by this Saint's charism of devotion to the Precious Blood of Christ and came around her relic to view it at closer range and to pay it honor.  I was happy for St. Maria de Mattias that she was being venerated in such a manner. 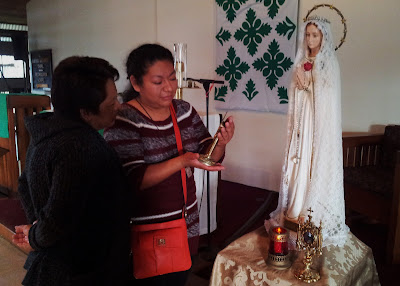 A parishioner and her mother, venerating the Sacred
Relics of Our Lady and St. Maria de Mattias.

The next monthly Rosary for  Peace will be prayed on Saturday, 3/2/2013, beginning at 4:25pm in St. Anthony's Day Chapel.  All are welcomed to participate.

Saint of the Month - February 2013: Blessed Marie of Jesus 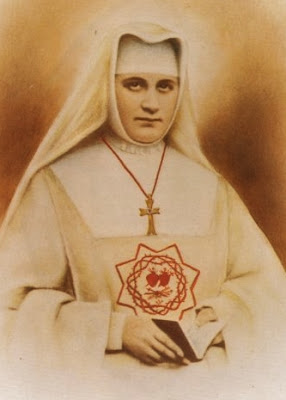 Marie Deluil-Martiny was born in 1841 to a wealthy family from Marseilles, France. Her parents were quite pious and instilled in their five children a lively faith. Marie, in particular, was quite expressive in her devotion, even as a child.  It was once reported that while she was still a teenager and attending a convent school run by Visitation nuns, she innocently started her own “congregation” with her classmates, complete with a rule and profession ceremony. When the Sisters got word of the group of play-nuns they were quite amused, but quickly put an end to their community.

After her studies were completed, the Lord subjected Marie’s family to several trials – her four siblings died one after another from illness and she was left alone to care for her parents who are both ailing themselves. Their situation eventually caused a financial strain on the family, which left them with a significantly depleted fortune. Despite the hardship, the family persevered in faith and they weathered the financial storm.

As an adult, Marie developed a profound love for the Sacred Heart of Jesus. She joined an association called the Honor Guard of the Sacred Heart of Jesus and was zealous in promoting devotion to the heart of Christ. Beginning in 1866, she experienced a series of interior lights and mystical contacts with the Lord that solidified her desire to give herself completely to God through religious consecration. At first she went through a period of severe scruples, but through the guidance of two holy priests, she again found peace and came to discern for herself a vocation as a victim, who spiritually united with the priesthood, the Blessed Virgin, and the Sacred Heart of Jesus, would make reparation for the many offenses committed against God. 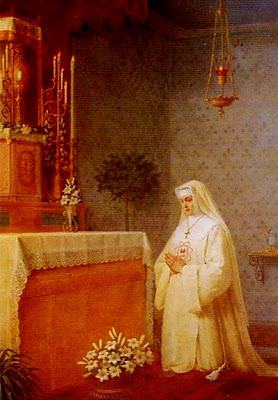 Patiently, she prayed and waited for an opportune time to make a move, all the while deepening her union with the Sacred Heart. Finally, in 1873, with the support of a sympathetic bishop, Marie founded a religious institute – the Daughters of the Heart of Jesus - in Berchem-lez-Anvers, Belgium, to bring her vision to life. At that time, Our Lady reportedly said to her, “For the future institute, the offering of the Holy Sacrifice of the Mass, the celestial offering of the Divine Victim sacrificed on the Altar, will compensate most excellently for the corporal mortifications that some constitutions can no longer bear.”

Mother Marie of Jesus, as she came to be called, exercised her office as foundress and superior by being a living example of the sacrificial charism that she wished to impart to her spiritual daughters.  She was noted for the tender love that she displayed to the other sisters, and for the writings that she penned to record her thoughts and mystical insights concerning her personal form of spirituality. Her burning love for the Sacred Heart went so far as to inspire her to continuously offer her very life for the success of the charism of victimhood that she felt urged to propagate; it was a sacrifice that was soon to be accepted.

In 1883, Mother Marie of Jesus had sympathetically hired an impoverished young man named Louis Chave as gardener to her foundation in La Servianne, France, and despite the Sisters’ charity towards him, he was rude and unreliable. His growing anarchist views also made him increasingly hostile to the Sisters, which necessitated his expulsion from the convent. In revenge, on February 27, 1884, Louis ambushed the foundress during the Sisters’ recreation time and shot her twice in the neck with a pistol before fleeing. Mother Marie of Jesus fell to the ground mortally wounded. She was heard to gasp, “I forgive him... for my work... for the institute.”  before expiring shortly after.

Rather than ending her work, Mother Marie of Jesus’ death had the effect of invigorating her legacy. Her congregation grew and spread throughout Europe, and as a direct result of her spiritual influence, an organization - the Association of Victim Souls – came to be established with thousands of members, which included such notable souls as St. Maximilian Kolbe, Bl. Columba Marmion, and Bl. Joseph-Marie Cassant.  The Church Beatified Bl. Marie of Jesus Deluil-Martiny on October 22, 1989 in recognition of her sanctity. Her body, exhumed miraculously incorrupt, is venerated today in the original convent that she founded in Berchem-lez-Anvers.  Please pray for her speedy Canonization.
A Reflection
“I wish to make souls for Myself who understand Me…” ~ Words of Our Lord to Bl. Marie of Jesus

A Short Prayer
Lord, grant us the grace and light of the Holy Spirit that we may come to understand you.  Amen. 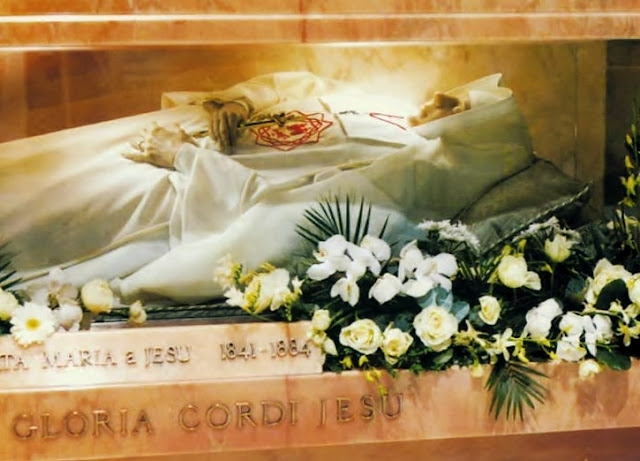 The incorrupt body of Bl. Marie Deluil-Martiny (the face and arms are covered with wax).  A priest who
was present at the ritual exhumation once shared with me about how surprised he and others were when they
discovered the body of the holy foundress darkened but preserved despite the gaping wound in her neck.