The Light of Lourdes

The oddest things can inadvertently get captured on live webcams; sometimes things that don't have an easy explanation. The amazing photos on this particular blog may just be an example of this phenomena. I did not take the pics myself, but a brother-in-Christ did, and he shared them with me to get my opinion on them.  I truly believe they're a genuine sign and, because the pics and the backstory are so inspiring, I felt the need to share them.
So just a bit of background concerning these photos - the man who took them ("Albert") is a personal friend who frequents Mass; is a strong devotee of the Blessed Virgin and St. Michael the Archangel; and a daily Rosary / Divine Mercy Chaplet prayer warrior. I recently introduced him to the Lourdes Shrine's live webcam - accessible in YouTube - and he's taken to doing his daily round of prayers every morning, while viewing the grotto of Our Lady's apparitions.
About a week ago, while praying the Rosary, Albert was surprised to witness the sudden and unexpected appearance of golden orbs of light "swirling" around in front of the statue in the upper niche of the Sacred Grotto (the exact spot where the Holy Virgin stood in her 18 appearances to St. Bernadette). He counted three large globes, which he said intermittently faded and reappeared throughout his prayer... and moved about too!  Below is a cellphone photo Albert snapped of his TV screen.  It's impressive and beautiful... and the story doesn't end there. 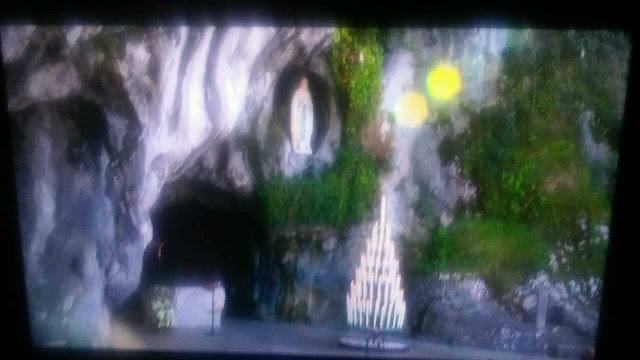 Two large golden orbs are captured in this photo.  Compare this pic to the last image at the very bottom to see how truly unusual this is.
A few days after... again, while praying the Rosary, Albert saw another manifestation of light, which was more astounding than the first incident. According to the man, he was on the 5th Luminous Mystery, meditating on the Institution of the Eucharist, when he saw the grotto's crucifix begin to "sparkle" brightly before radiating streams of light down upon the altar... and significantly, the lights were reddish and bluish - the colors of Divine Mercy!  If that weren't enough, orbs of light again appeared and moved around in front of Our Lady's statue.  The entire manifestation lasted until the end of the Rosary and, fortunately for us, Albert had the presence of mind to take more pics, which he texted to me soon after - see them below.  Again, they're clear and beautiful! 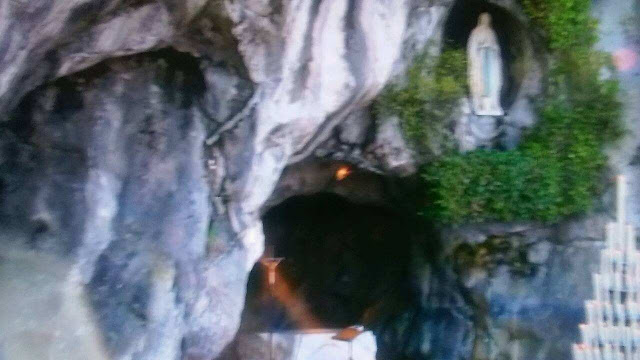 Light can be seen in these photos emanating from the crucifix. 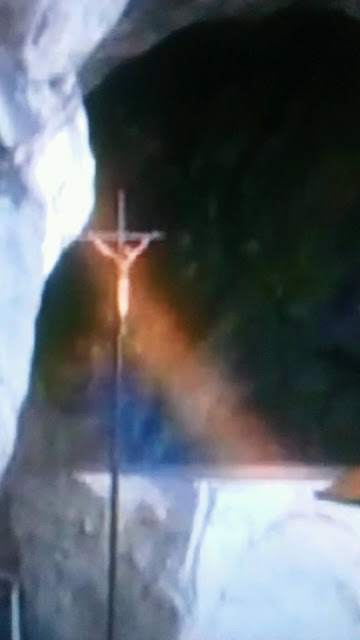 In these close‐up shots, the red and bluish lights are clearer. 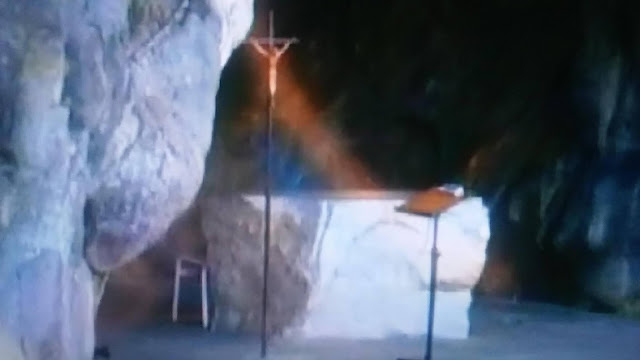 In the photos below, orbs of light are also captured as they descend
to the hallowed niche where Our Lady once stood. 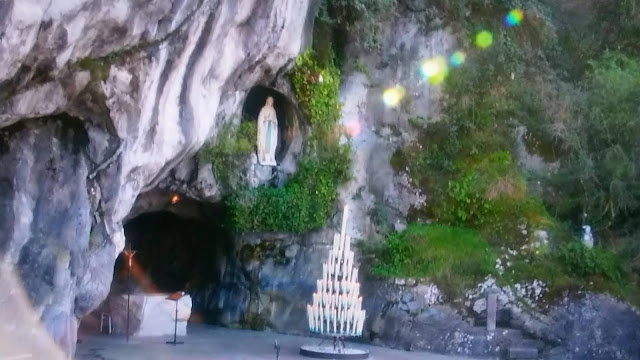 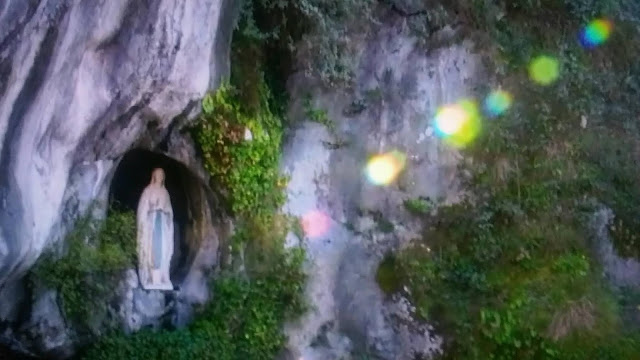 I frequently view the same Lourdes livecam at different times of the day and I've never seen anything like this before, nor any sort of solar lens flare on the camera, so I know the pics are not due to sunlight... and how appropriate is the light - representing the Precious Blood and Water - streaming from the crucifix to the altar at exactly the same moment Albert was contemplating the Lord's gift to us of his Body and Blood in the Eucharist?
I'm convinced these events are a sign from Jesus and Mary to Albert; special affirmation he's on a good spiritual path and should continue walking it.  Plus, Lourdes is a place well-known for miracles so why couldn't this be possible?  I'm glad Albert shared his experiences because not only is it extraordinary, but there's an underlying message in the pics for all of us, too, especially the illuminated crucifix photos.  As I like to say at times: pictures are sometimes worth a thousand words. 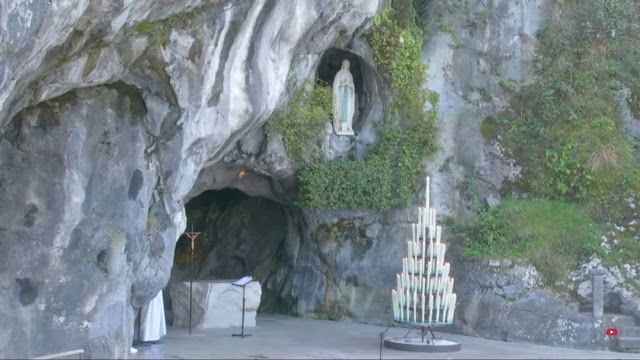 A screenshot of what the Holy Grotto usually looks like on the live
webcam (that's a priest in the grotto entrance, not Our Lady).
... and I almost forgot to mention one final and  important detail - Albert also told me that when the crucifix began streaming light, he touched its image on the television and immediately felt a mild "shock" flow into his hand then throughout his entire body, which left him elated with JOY.  He was still very excited when he later described it to me over a phone call - he said it felt as though Jesus had "moved" through him.  Amen.
* * *  U P D A T E , 3 / 7 / 2 0 2 1 * * *
I have an exciting update to this post.  On the night of 3/6/2021, I went to sleep leaving my smart TV on with the Lourdes live webcam open on YouTube.  At around 2:00am the following morning (3/7), I found myself suddenly awakened and my attention was drawn to the brightness of the television screen - to the familiar scene of the Holy Grotto.
Almost immediately, I was startled to see luminous orbs of various colors begin appearing in the live webcam footage.  At first the orbs were still and flickering... but then they started to rapidly move about in front of the upper niche; a veritable "dance" of lights(!), as seen in the short video clip below.  I was excited, to say the least, and I couldn't help but think of Albert while repeatedly asking myself, "Is this what Albert saw?"

I studied the lights closely to see if they were actually insects (moths) near the camera lense but they clearly aren't... and they certainly didn't look like lense flare by the way they flickered and moved about, while the camera view remained fixed.  Neither was there anything on my side that was reflecting onto the screen.  The whole phenomenon lasted about 3 minutes, which gave me time to film using my cellphone.  Oddly, after I ended the recording, the orbs also stopped moving before fading away.
I don't know what I saw this morning... and I'm still bewildered by it all... but whatever those "dancing lights" were - they were beautiful!
Peter @ Guadalupe House Ministry, Honolulu