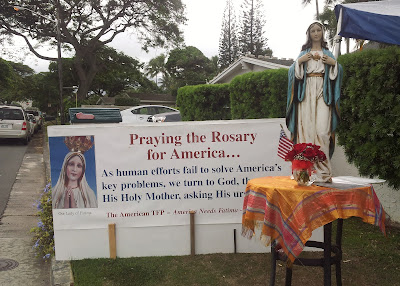 A large sign outside the Vargas Residence, testifying to their Catholic Faith
and their devotion to the Blessed Virgin (note the gloomy weather).
Today, on the 95th anniversary of the stupendous Miracle of the Sun at Fatima (Portugal), the Vargas Family in Kailua again hosted a Rosary Prayer Rally as part of their participation with the nation-wide annual prayer campaign﻿ sponsored by the America Needs Fatima organization.  I was graciously invited to be a part of the prayer gathering and to also bring with me my veil-relic of our Blessed Mother and the Holy Relics of the Beatified Fatima children: Bl. Francisco & Bl. Jacinta Marto. Since the prayers were held in a private/home setting, I was able to include a 2nd Class Relic of Sr. Lucia dos Santos (d. 2005)  from my  ministry's custody, which meant that all three of the Fatima seers were represented at the event through their relics! 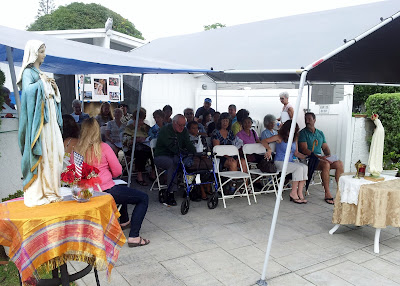 A photo of some of the prayer participants who gathered in the
driveway of the Vargas Residence to pray the Holy Rosary.
Before the beginning of the prayers at Noon, the skies were covered by dark grey clouds and rain fell throughout Kailua causing several people near the outside of the tent to open umbrellas... but remarkably, no sooner had the prayers started when the rains suddenly subsided and sun came out!  The timing was so obvious and reminiscent of what happened at Fatima in October 1917... that many of us had no doubt in our minds that it was a little sign from our dear Heavenly Mother. 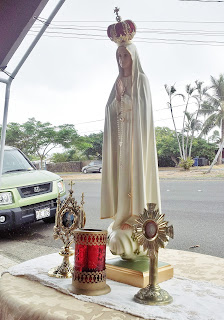 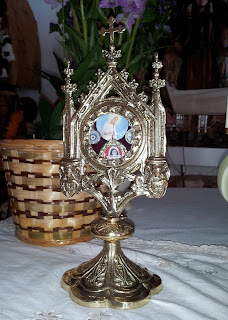 This ministry's 27" Fatima Pilgrim Virgin statue flanked with the relics of the
Fatima Seers and Our Lady's clothing.  A closer view of the Fatima relics is shown to the right.
(click on all the photos in this blog to see larger images)
After we finished the prayers, I was invited by the lady of the house - Auntie Patty Vargas - to give a brief talk on the history of Our Lady's apparitions at Fatima, Our Lady's call to pray and sacrifice... and the significance of Sacred Relics in the Catholic Faith.  We then headed indoors with Our Lady's statue and the relics, and enjoyed a delicious meal courtesy of our hosts.  It was definitely another successful prayer rally for the Vargas Ohana.  'am already looking forward to the 2013 rally! 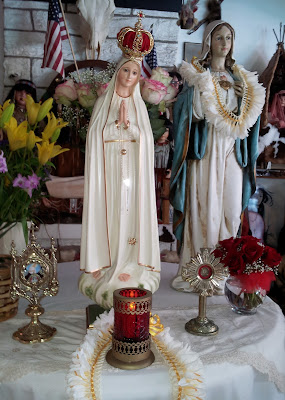 A makeshift altar set-up in the Vargas home to display the two statues of Our Lady
and the Holy Relics that were present at the event (the lovely Immaculate Heart of Mary statue
belongs to a friend, a relative of our host).
Peter @ Guadalupe House Ministry, Honolulu