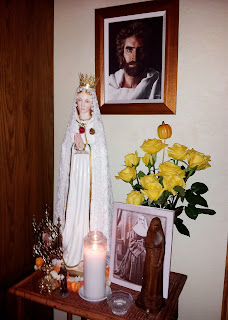 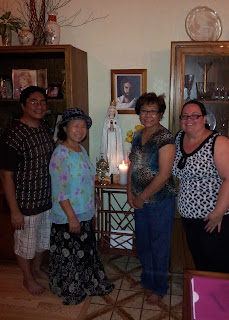 A few of the regular participants of Our Lady of Fatima Prayer Group
standing beside the Rosa Mystica shrine in the Gruber home.
What an evening last night turned out to﻿ be!  At this month's prayer meeting at the Gruber home, we did our usual round of prayers prior to which I shared about the holy lives of the great St. Francis of Assisi and our new Saint, Mother Marianne Cope.  We also venerated relics from each Saint and had a very meaningful discussion about what these holy people personally meant to us.  The rest of the meeting proceeded, as usual, with nothing particularly eventful to report... but it was what happened afterwards that really came as a big surprise. 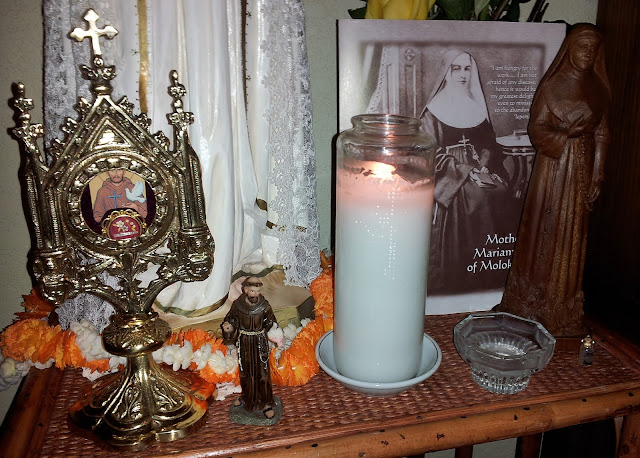 At tonight's meeting, we venerated a 1st Class Relic (bodily ashes) of
St. Francis of Assisi (left) and also commemorated St. Marianne's memory through
a small glass phial filled with blessed soil from her original grave at Kalaupapa.
Just a few moments after we concluded our last prayer with an "Amen", two of our cellphones in the room started going off like crazy.  Dre, our host, answered her phone first, only to learn from someone on the other end that we had a "Tsunami (tidal wave) Watch" in effect due to a 7.7 magnitude earthquake that occurred in the Pacific coast of British Columbia, Canada.  It was really uncanny because just minutes before - during our open prayer intentions segment of the meeting - we had invoked the Lord's protection for our country from hurricanes and other natural disasters... and next thing we know, we're facing a potentially dangerous tidal wave that was headed straight for our Hawaiian islands. 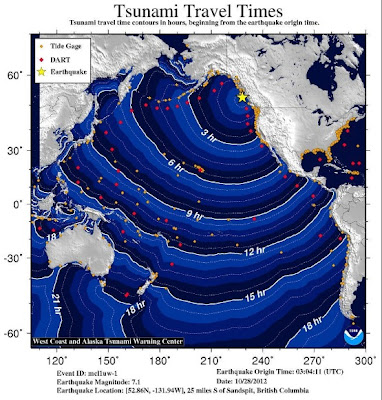 A chart of the Canadian earthquake that triggered the latest
Tsunami Watch in the Hawaiian islands.
Needless to say, we hurriedly finished our potluck meal and the three of us who lived on the windward side of Oahu, headed for home to prepare ourselves.  After a couple of hours of tense waiting and more rosary prayers, the tsunami arrived at about 10:30pm... but not in the magnitude originally expected - Thanks be to God!  All of us who participated in last night's prayer meeting later expressed our gratitude that we were able to come together in prayerful intercession for our island home and for the rest of the country.  I'm not saying that we stopped the tsunami, but I do believe all the prayers that were offered last night by many concerned people in Hawaii (and beyond) - including us - combined together, must have somehow moved the merciful heart of God to spare us.  Prayer is indeed powerful... and yet again, we dodged another bullet.
* * * * *  Update: 10/29/2012  * * * * *
While browsing through some of the other photos that I took with my cellphone during this prayer meeting, I found among them, the photo shown below.  Initially, I didn't use it for this post because of the unattractive flash-glare that showed up on the picture of St. Marianne that was on the altar... but now I'm adding the photo because of it.
When I took a second look at the photo on my computer screen this morning, my eyes were drawn to the light reflection and I noticed that there was a distinct image of a man mysteriously formed in it; I was stunned... and if you compare the photo with the one shown above, you can see that the image was not something that was already superimposed on the picture of St. Marianne.  I am praying to the Lord to enlighten me about the significance of this unusual image. 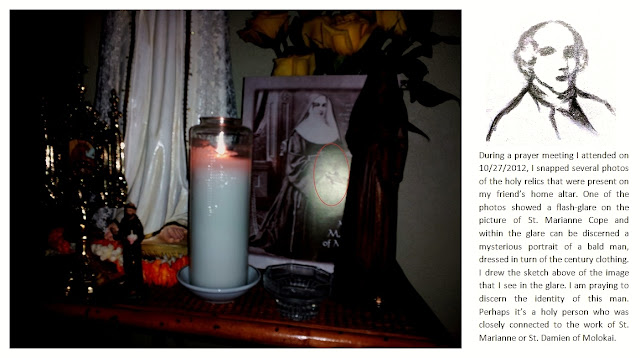 A mysterious image of a man (circled in red) appears in the flash reflection on St. Marianne's photo.
(click on the photo to view a larger image)
Peter @ Guadalupe House Ministry, Honolulu