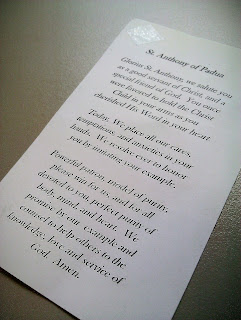 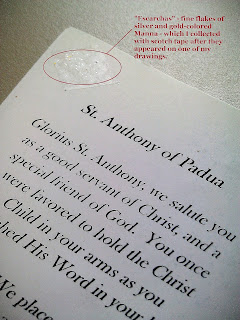 A sampling of Escarchas, taped to a prayer card, which mysteriously appeared on one
of my drawings while I was at work (click on the photos to view larger images)

I experienced something strange, but wonderful,  on the morning of June 20th... have you ever heard of Escarchas?  "Escarchas" is the Spanish word for "frost"... but in certain religious circles the same word has also been used to describe small, shiny colored particles - mainly fine flakes of gold or silver - that have materialized at a few Marian apparition sites or during random prayer events.  The alleged phenomena is not exclusive to Catholics, but it has also been frequently reported by Fundamentalist Christians at their charismatic prayer services; they refer to it as "Shekinah Glory Dust", or simply "Gold Dust".

I only learned about the phenomenon of Escarchas maybe about a year and a half ago, and I never really knew what to make of it.  Largely ingnorant about Escarchas, I figured that it was similar in concept and/or purpose to the mystical sign of "Manna" - the mysterious fluid or solid substances that have appeared throughout Christian History to nourish and/or heal the People of God.  I was also a little cautious about it because I felt that it was a little too "glitzy" to be taken seriously as a spiritual sign, and for the most part, that's what I believed until a couple of days ago...

A few examples of Escarchas - (Left) Emma de Guzman, an alleged Filipino mystic, manifests Escarchas
on her face; (Center) a framed prayer card covered with Escarchas from an apparition site in Venezuela; (Right) a weeping Sacred Heart statue in Australia covered with multi-colored Escarchas
On June 2oth, while at my place of work, I printed a copy of a drawing that I sketched for my parish priest and placed it face-down on the desk beside me.  A bit later when I picked up the paper to show it to a coworker, she noticed a light sprinkling of silver and golden particles on the drawing; it resembled glitter, except it was much finer than any glitter that I've ever seen before... plus, there was no container of glitter present anywhere on my desk.  Perplexed, but not thinking much of it, I swiped the shiny flakes off the paper and off my desk, and then noticed additional flakes sticking to both my hands and on the top of my forearms. When I looked back at my desk, it looked as though there were more flakes so I started removing them with a clear piece of scotch tape to avoid spreading them around.

Feeling a little incredulous, I left my cubicle to speak with a trusted friend and also showed her the shiny particles on the paper and on my arms; the ones clinging to my body appeared to have increased!  It was at that point that I began to suspect that we were witnessing a manifestation of Escarchas. My friend and I discussed the circumstances in detail and we both concluded that it was perhaps a sign from St. Anthony of Padua; that he was pleased with the drawing I did for my priest (see below)... 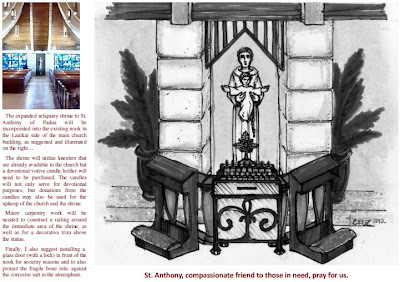 The drawing on which the Escarchas first appeared
(click to view a larger image)
You see... my parish priest - Fr. Clarence - is planning to transfer and enlarge our current reliquary-shrine of St. Anthony of Padua within our main church building.  He also intends to incorporate a large votive candle stand so our parishioners will have the option of lighting candles when they pray.  When Fr. Clarence asked for my feedback, I thought it was an excellent idea so I sketched a design of what I thought would make for a wonderful new shrine to our Patron Saint; it was on this drawing that the Escarchas were first noticed.

Later on, during that same morning, a little more of the shiny flakes were noticed on my desk despite the fact that I had taken the extra care of ensuring that it was free of any debris; I would turn away for just a few moments, and when I looked back down at my desk, the shiny substance would be where none had been before!  The entire scenario played out for about an hour before I stopped noticing the appearance of new flakes.

Reflecting on this recent unusual occurrence in my life, this episode again left me humbled and grateful to God (I couldn't stop thanking and praising Him in prayer!)... at the same time, although I was deeply impressed by the appearance of the Escarchas,  I remain devoutly cautious.  Much prayer  is still needed to  spiritually discern the full meaning behind the manifestation of this shimmering form of Manna. It is my hope that St. Anthony of Padua did indeed send the Escarchas to convey his satisfaction and blessings over the plans for his new shrine.  If all goes well, I can't wait for the shrine to be completed by Advent of this year - I anticipate it being a great grace for our community and for our visitors!  May St. Anthony continue to bless and intercede for us.
Peter @ Guadalupe House Ministry, Honolulu