Saint of the Month (Round 2): Saint Anna Schaffer Anna Schaffer (also spelled as "Schaeffer") is one of those holy souls who during her lifetime passed quietly and unnoticed... but after she died, her reputation for exceptional goodness did not fade with her earthly life, but instead, guided by the hand of God, it slowly grew and grew until it finally snowballed during the last 20 years; culminating in her recent Canonization this past October 21st.
I normally feature just one Saint a month on my blog, but in the past week I noticed on my behind-the-scene stats, that a lot of recent visitors to my website were due to searches for "[Saint] Anna Schaffer".  I can only speculate that the recent Canonization events in Rome had many people around the globe wondering who this obscure German laywoman was (I, myself, only learned about her 9 years ago)... and what was it about her that prompted the Church to proclaim her one of its newest Saints.  If you're one of those curious people, this particular posting will be of interest to you.

To begin... St. Anna Schaffer was born to a poor yet devoted German couple on February 18, 1882, in Mindelstetten, Bavaria.  She was a precocious and pious child, who from her First Holy Communion resolved to become a missionary nun.  During her teen years she worked diligently to raise money for the dowry needed to join a congregation, but her dreams of living as a religious were dashed by an unforeseen tragedy.
One fateful evening in 1901, Anna was seriously scalded at her workplace after she slipped and landed knee-deep into a large vat of boiling bleach, while attempting to fix a broken stovepipe.  Obviously, the accident left the unfortunate woman in atrocious pain and horribly scarred... and to make matters worse, all the medical treatment proved futile and she was eventually confined to bed as an invalid with sores that needed regular treatment. 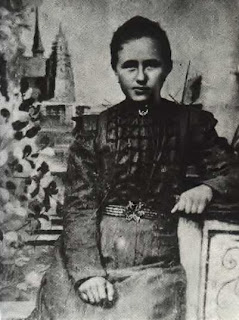 St. Anna Schaffer as a young girl.  She had resolved to
live only for Jesus after her First Holy Communion.

Initially, Anna was filled with anguish and regret over the accident and her infirmities, but through the compassionate and constant guidance of her parish priest, she came to slowly accept her painful condition as a special call from God to imitate Christ Crucified. She offered her life as a sacrifice for sinners and for the spiritual needs of the Church, and in this manner, she eventually found peace, joy, and a sense of purpose for her sufferings.
Things took an extraordinary turn in 1910 after she received several visions of St. Francis of Assisi and the Lord, himself, who bestowed upon her the Sacred Stigmata in her hands, feet, and side. Anna’s humility prompted her to ask the Lord to hide the visible wounds, which he eventually did, but she continued to feel the pain of the Stigmata for the rest of her life.

Anna spent her remaining years living in poverty, yet her day-to-day existence was made rich and fruitful by prayer, atonement sufferings, and counseling those in need of spiritual guidance through either personal contact or through an active letter-writing apostolate.  At times she suffered from diabolic physical attacks but these were offset by heavenly visitations from Jesus, Our Lady, and the Angels and Saints.
It was also reported this mystic experienced the gift of Bilocation, as attested by witnesses who saw her ministering to the poor and infirm in distant places although she was physically incapable of leaving her own sick bed. 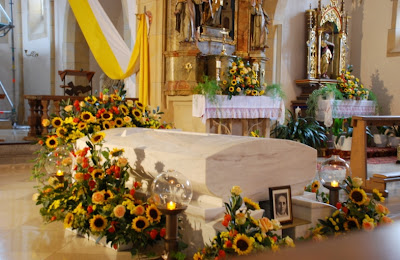 The Saint's beautiful tomb in the parish church of
Mindelstetten, Bavaria (Germany)

In the end, Anna’s final illness was rectal cancer, which led to her holy death on October 5, 1925; her last words were, "Jesus, I live in you".  The funeral service that followed was the biggest ever remembered in Mindelstetten and Anna’s grave immediately became a place of pilgrimage where hundreds of cures and favors were recorded by the town's parish church.  She was beatified by the late Pope John Paul II in March 1999... and Canonized on October 21, 2012.  Her tomb (now within the parish church) continues to be a place of pilgrimage, especially among German Catholics.

A Reflection
“The righteous call out, and the Lord hears them; He rescues them from all their troubles.”  ~ Psalm 34:18

A Short Prayer
Dear St. Anna, pray for me that I might have an abundance of Faith and Fortitude during my own times of personal trial and illness.  Amen.