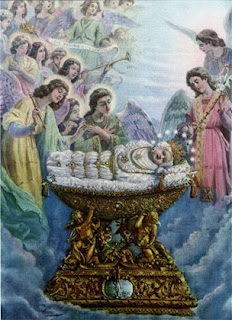 The miraculous image of the Maria Bambina,
as venerated in Milan, Italy

Catholics throughout the world are familiar with images of the Christ Child, most especially with replicas of the miraculous image of the Infant Jesus of Prague. But not many are aware that there’s a counterpart Baby-Mary statue in Milan, Italy, that’s affectionately called the “Maria Bambina” (Infant Mary). Like the famous Prague statue, the Maria Bambina is also molded from wax and enjoys a solid reputation as a channel of heavenly grace, especially healing.

The life-sized image of the Maria Bambina was originally molded by a saintly Poor Clare nun named Sr. Chiara Isabella Fornari from Todi, Italy. Sr. Chiara Isabella was a talented artist who also happened to be a great mystic. She experienced special favors from the Lord, including the invisible Stigmata, which were accompanied by a set of wounds around her brow, symbolizing the crown of thorns worn by our Lord. When she died in 1744, she left this world with a firmly established reputation for holiness and miracles.

Sr. Chiara Isabella’s tender devotion to Our Lady and the mystery of her holy infancy inspired her to sculpt the wax image, which was then venerated in her convent. Before her death she bequethed the Maria Bambina to a Capuchin Convent in Milan after which it passed from one custodian to another until it was received in 1876 by the Sisters of Charity within the same city.  By that time, the image was worn with age and had become an unattractive grayish-yellow color, but the Sisters continued to privately honor it each September 8th - the Feast of Our Lady's Nativity - despite its homely appearance. 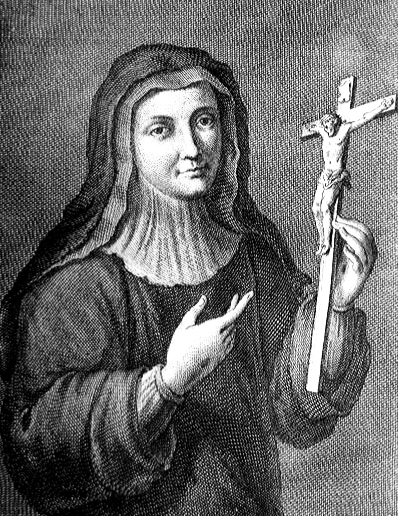 In September 1884, a series of extraordinary events occurred which brought the Maria Bambina into the public spotlight. A paralyzed sister, Sr. Giuseppina Woinovich, asked the superior for the image to be brought to her bedside; a request, which the superior granted. The statue remained with the afflicted sister overnight and before being returned to its storage chest, the superior was inspired to bring the image to another seriously ill sister who was suffering in the infirmary. The nun - a novice named Giulia Macario - affectionately cradled the image in her arms and fervently implored Our Lady’s intercession; she was immediately cured. Within the next few months, Sr. Giuseppina was also miraculously healed of her paralysis through Mary's intercession, along with another gravely ill Sister.  The community of nuns marveled at all the heavenly graces that they received through the Maria Bambina, but they were unaware that Our Lady had yet another wonder in store for them...

On January 16, 1885, the Sisters of Charity noted that the statue itself had begun a remarkable transformation - gradually, within a few days, its unattractive grayish hue changed to a rosy flesh-color, while its roughly-molded features took on a charming and exquisite life-like appearance. The miracle make-over was strikingly obvious, and the effects of it can still be seen today. 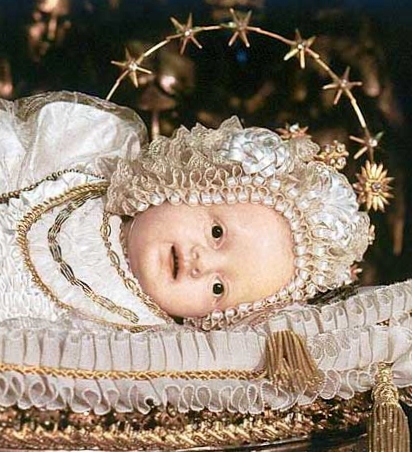 Not surprisingly, news of the miraculous image spread outside of the convent walls, which quickly established the fame of the Maria Bambina in Italy. Today, the image is kept in an ornate, cradle-like shrine in the motherhouse chapel of the Sisters of Charity and is venerated in a special manner each year on September 8th. The statue is so well-known in the region, the good Sisters have become synonymous with it and are now also referred to as the “Maria Bambina Sisters” because of their custodial duties with the image. 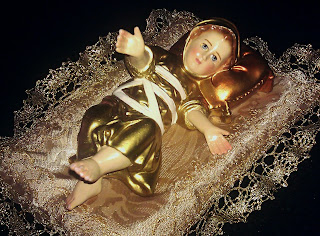 
A Prayer to the Infant Mary


Sweet Child Mary, destined to be the Mother of God and our sovereign and loving Mother, by the prodigies of grace you lavish upon us, mercifully listen to my humble supplications. In the needs which press upon me from every side and especially in my present tribulation, I place all my trust in you.

O Holy Child, by the privileges granted to you alone and by the merits which you have acquired, be merciful to me this day. Show that the source of spiritual favors and the continuous benefits which you dispense are inexhaustible, because your power with the Heart of God is unlimited. Deign through the immense profusion of graces with which the Most High has enriched you from the first moment of your Immaculate Conception, grant me, O Celestial Child, my petition, and I shall eternally praise the goodness of your Heart.  Amen.