Bl. Peter ToRot
A Martyr for Holy Matrimony ~ Memorial: July 7th
July's featured Saint is another modern holy person - an ordinary layman; a husband; a father; a catechist; and a Church-recognized Martyr.  With the exception of the martyrdom part, this writer believes Bl. Peter's life is relatable and can be easily imitated by all Christian men... and, of course, women, too!  As with all Saints, his life reminds us that we, too, with some effort and courage, can rise to a higher level of personal sanctity in accordance with God's will.  This is Bl. Peter ToRot's story...
Born on March 5, 1912, on Papua New Guinea, Peter was the son of a local chieftain.  When European Catholic missionaries arrived in their village just a few years before, they were well-received by the people... more so, because the chief and his wife were converted (baptized "Angelo" and "Maria", respectively), and lived fairly devout lives.  Peter, their third child of six, was educated in the mission school and displayed a high-level of dedication to the Faith and, so much so, he impressed the priests who eyed him as a possible candidate for the priesthood.  Chief Angelo, however, objected to the idea, on the grounds he believed it was too soon for any of his men folk to become priests, given they had only recently come to know Christ.  Considering the chief's reasoning, the missionaries proposed having Peter commissioned as a Catechist, instead, to which Angelo readily agreed. 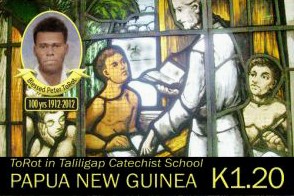 From a commemorative postage stamp issued by Papua New Guinea: Bl. Peter training to be a Catechist.
At 18-years-old, Peter was taken to a college run by the Missionaries of the Sacred Heart in neighboring Taliligap, where he was trained extensively in the Church's teachings.  In 1933, the Bishop of the region formally commissioned him as a Catechist, and he was sent to the parish of Rakunai to assist the priests in teaching his fellow islanders.  There, Peter proved himself to be not just a capable teacher, but he also came to be respected as a spiritual leader in the community because he not only preached the Faith well, but LIVED IT in a manner that was evident to his peers.
During his mission work, Peter met and fell in love with a convert from another village - Paula la Varpit - and the pair married in November 1936.  Fortunately for him, Peter's new bride was like-minded in regards to matters of faith and, together, the couple practiced a consistent spiritual life that was a good example to their neighbors.  Three children were born of their happy union.
Things changed in Papua New Guinea when the Japanese invaded the region in 1942 during World War II.  Hostile to any Western influences, the occupying forces imprisoned or deported foreigners, including the missionary priests.  As they left Rakunai, the missionaries entrusted the spiritual care of the parish to Peter who didn't disappoint. 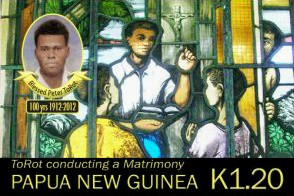 The young catechist continued running the small church where he administered baptisms; witnessed marriages; taught the converts; smuggled the Eucharist from priests in hiding to the parishioners; administered the various charitable programs offered by his parish; and managed church records... all while also seeing to the care of his growing family.
Aggression towards western practices, on the part of the Japanese troops, steadily escalated before resulting in the burning of the parish church in late 1943.  This setback did not stop Peter, who constructed makeshift chapels in remote forests and caves where prayer services were secretly held, and the Sacraments of Baptism and Marriage continued.  His actions placed him in grave danger but the catechist bravely persevered; practically keeping the Faith alive in Papua New Guinea - single-handedly - in the absence of the priests.
To further counteract the influence of Christianity on the islanders, Japanese authorities reinstated and promoted the practice of polygamy, which Peter vehemently and vocally opposed due to its contradiction to the Church's teaching on Marriage.  It was his stance on polygamy that led a few of his peers - ironically, a married Christian policeman and a couple of his own brothers who all wanted second wives - to betray him to the authorities.  Peter was arrested on Christmas Day, 1944, after his home was searched and sacred vessels were discovered. 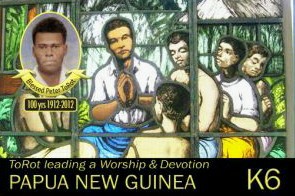 Imprisoned in a concentration camp, Peter was intimidated and beaten in an effort to have him renounce his ministry; his pregnant wife and children were also brought in to try to persuade him to comply with his captors, but Peter steadfastly refused them all.  Furthermore, efforts by other village chiefs to have him released, based on his high social standing as the son of a chief, were unsuccessful.
After more than six months of captivity, the lay-apostle suspected his death was imminent.  He spoke of it to his mother and wife to prepare them and, on the morning before he died, Peter asked his wife to bring him his best clothes, along with the catechist's cross he received from his bishop.  In his simplicity, he wanted to be at his Sunday best when he went to meet the Lord.
According to another prisoner who witnessed Peter's death and testified to Church officials - on the evening of July 7, 1945, Peter was forcibly restrained by soldiers, as cotton wads were stuffed into his ears and nostrils.  A doctor then injected him with an unknown substance that caused almost immediate convulsions and vomiting.  A soldier covered his mouth while another struck him a number of times in the back of his head and neck with a piece of lumber.  The prisoner eventually succumbed to either the poison or the beating. 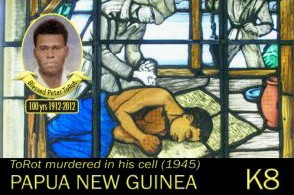 The following day, Peter's family was summoned to claim his lifeless body - the explanation provided them was that he had "fell ill and died" from an "infection" during the previous night, although signs of physical trauma were evident on his corpse.  He was only 33-years-old at the time of his death.
When news of his untimely passing broke, Peter was spontaneously hailed a hero and Martyr of the Faith by local Christians, and he was accorded a chieftain's funeral. Popular devotion to his memory was immediate and only increased when cures were reported through the prayerful use of soil from his grave in Rakunai.  His Cause for Canonization was officially opened in early 1986 and, after Pope John Paul II discerned Peter's death was directly due to hatred of the Faith ("In Odium Fidei"), he was Beatified on January 17, 1995, as a Martyr, during the Pope's visit to Papua New Guinea. 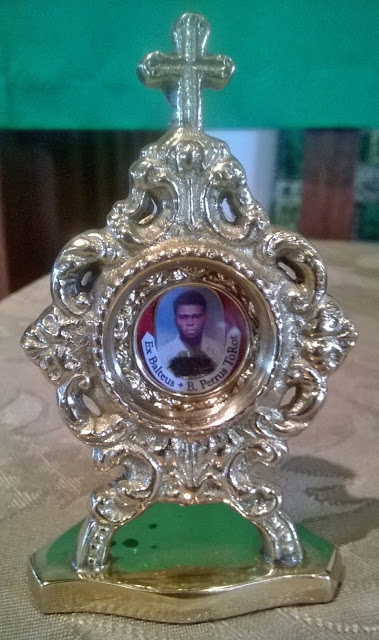 In this ministry's custody:
A relic of a piece of a leather belt worn by
Bl. Peter ToRot during his execution, and
which he was buried with.
Bl. Peter ToRot's mortal remains - his blessed relics - are still enshrined in Rakunai, where he faithfully served God's people in truth... example... and with courage unto death.  Some may say he continues to serve the local church even in death because of the many priestly vocations his example reportedly inspired, and continues to inspire.  Additionally, he is sometimes called a Martyr for the Sanctity of Marriage and appropriately so.
May Bl. Peter pray for us, and especially for the healing of troubled marriages so prevalent in our time...
Bl. Peter ToRot, pray for married couples of today...
to be loving and faithful to one another, as they once
vowed.  May God be the solid foundation of their union
especially in times of challenge.  Amen.
Peter @ Guadalupe House Ministry, Honolulu