Saint of the Month - August 2012: Saint Mariam of Jesus Crucified 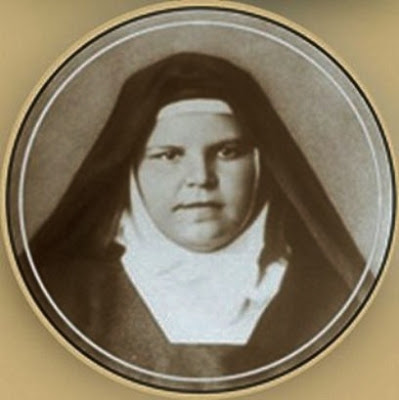 This Carmelite mystic's life was filled with tales of extraordinary wonders that began from her childhood years, some of which would seem so astounding as to leave most minds skeptical, if not for the many credible witnesses who vouched for their veracity.
Born on February 5, 1846, to devout Christian parents in Abellin (Palestine), Mariam Baouardy was orphaned at a very young age.  An uncle adopted her, and she was treated very well until the topic of marriage was brought up when she was 13-years-old.  Although she was still quite young, the child had already planned on consecrating herself wholly to God through a vow of perpetual virginity, but her uncle would not hear any of it.  He attempted to break Mariam's will by treating her as a servant in his home, which tried her sorely.
"It is sweet to think of Jesus, but it is sweeter to do His Will."
~ words of St. Mariam
During this rough patch in her life, a male-servant in her uncle's household befriended Mariam, but he did so with the intent of converting her to Islam.  When she realized the servant's plan she rebuked him and professed her faith in Jesus Christ, which enraged the man who slashed her throat with a sword.  The servant then carried the maiden's limp body into an alley and left her there for dead, wrapped in a large rug.
What happened next was the escalation of supernatural events in Mariam's life.  She awoke in a cave being cared for by a mysterious nun in blue.  As it turned out, it was none other than the Blessed Virgin, who nursed her back to health (Mariam bore a deep scar and spoke with a hoarse voice for the rest of her life as a result of the horrible neck wound)... then revealed to Mariam her entire life; how she would eventually enter consecrated life and die in the Holy Land. 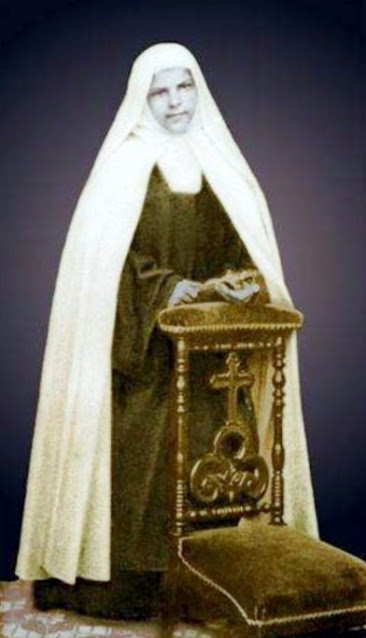 A photo of St. Mariam, clothed as a Carmelite (continue readingto the very end to learn something interesting about this image).
Once she was completely recovered, Mariam never returned to her uncle's home but instead was directed by Our Lady to a neighboring city where she found work as a servant for a devout Christian family.  Following divine inspiration, in 1863 she boarded a ship to Marseilles, France, where she joined the Sisters of St. Joseph of the Apparition.
As an aspiring religious, Mariam's spiritual life intensified as the mystical gifts she had already been experiencing became even more manifest, mainly through Ecstasies and Visions.  To these were later added visible bleeding  Stigmata  and astounding Levitations, which troubled her since they caused misunderstandings and suspicion from some of the other nuns.
Furthermore, as the nun's relationship with God deepened, she longed for a more contemplative life, away from curious eyes, so she sought and received official dispensation to leave and enter the Discalced Carmelites of Pau in 1867; there, she took the name "Sr. Mariam of Jesus Crucified".  Her new life as a Carmelite was marked with deep humility and a desire to abase herself to the point of referring to herself as the "little nothing".
"Everyone is sleeping and God so full of bounty, so great, so praiseworthy, is forgotten.  No one thinks of Him.  See, the whole nature praises Him, the heavens, the stars, the trees, the grass, all things praise Him; and man who knows His kindness, who should praise Him, sleeps.  Let us go, let us go and wake the universe!"
~ words of St. Mariam
In 1870 Sr. Mariam was one of several nuns sent to Mangalore, India, to establish a new Carmel there. She continued to experience spiritual phenomenon including physical harassment from the devil, but was also consoled by angelic visits. There are charming accounts of how she often mysteriously floated to the top of her favorite tree in the monastery garden... and would stand on the topmost branches, in ecstatic rapture, without bending the limbs.  These levitations were so clearly observed, and frequent, a superior once commanded her back to consciousness leaving her stranded on the treetop.  The other nuns then had to rescue Mariam with a ladder.
Another aspect of the Saint's spiritual life was her great love for the Holy Spirit, which prompted her to write to the Pope urging him to promote more devotion to the Divine Paraclete, as she felt there wasn't enough emphasis about Him in the Church. 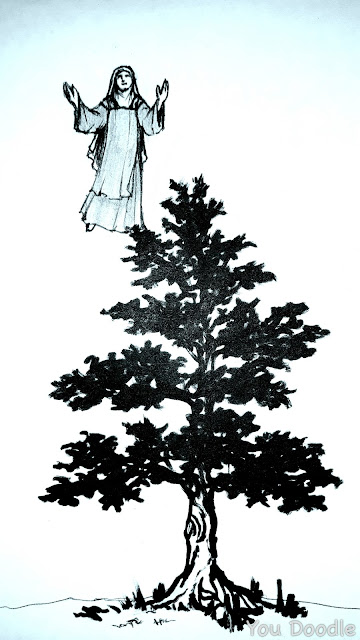 An illustration depicting St. Mariam's frequent flights
to the top of a lemon tree in the monastery garden.
In 1872 she returned briefly to France before setting out to the Middle East to establish another Carmel in Bethlehem.  She was happy at the thought of being able to pray for the conversion of her people on her home soil but Divine Providence would have it that she not spend much time in Palestine.  While assisting with the construction of the new monastery, Sr. Mariam had a serious fall that broke her arm.  The injury was not properly treated and it quickly lead to a gangrenous condition that claimed her life on August 26, 1878; she was only 32-years-old.
The Discalced Carmelite Order came to hold the memory of Sr. Mariam of Jesus Crucified in high esteem so it was with great joy they celebrated her Canonization on May 17, 2015.  Her tomb and relics are venerated in the Carmel she established, and she is invoked in a special way as a Herald of Peace and Hope in the war-torn regions of the Middle East.
A Reflection
"Every person in the world that will invoke the Holy Spirit and have devotion to Him will not die in error."
~ Words of St. Mariam of Jesus Crucified
A Short Prayer
Come, Holy Spirit, inflame our souls with the Fire of Love and the Light of God’s Divine Truth.  Amen.
+ An Interesting Anecdote & Testimony to the Special Significance of Relics + 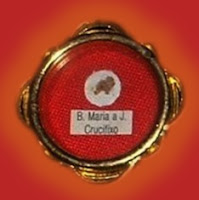 This ministry has in its custody, a rare 1st Class Relic of St. Mariam - a small piece of bone from her body and there's an interesting story behind it...
Circa the late 1990s, I had a clear dream of a Carmelite nun who I didn't know or recognize.  She wore the Order's distinctive brown habit with a cream-colored mantle; was barefoot; and appeared rather short in stature, with a pleasant roundish face.  The nun approached from my left and stopped about 10 feet away from me.  She then smiled and spoke a single sentence before the dream ended abruptly:
"I am coming to live with you."
When I awoke, the imagery in my dream remained vivid... but I wracked my brain the whole day trying to decipher who the mystery nun was, and what her words meant.  I just didn't know.
Three days later, I received a small padded envelope in the mail from a priest and, when I opened it, a piece of paper fell from it onto the floor.  Upon picking it up, I was shocked to discover it was actually a holy card with a photograph - the same image as the second one shown above!  It was the Carmelite from my dreams and her name printed on the card was Blessed Mariam of Jesus Crucified (at the time she was only beatified).  I then looked into the envelope and there, inside, was the relic shown here.  I immediately understood what St. Mariam's words meant and, ever since, she has occupied a place of honor in "Guadalupe House"... as well as, a warm spot in my heart.