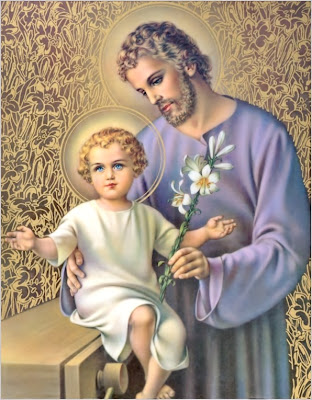 I  have a confession… until fairly recently, I never paid much attention to our dear, illustrious St. Joseph, the foster father of our Lord, Jesus Christ.  Don’t get me wrong – I know he's a great, great Saint.  I mean, how could St. Joseph not be GREAT if God chose him out of all the men of his time to be the earthly guardian of His only begotten son, as well as the Blessed Virgin Mary?  But I guess because there's so little we know about him compared to other Saints - notable ones like St. Francis of Assisi, St. Anthony of Padua, St. Rita of Cascia, or St. Catherine of Siena, etc. - that it sometimes becomes easy to overlook St. Joseph, whose life was quietly hidden although I'm sure not lacking in exceptional sanctity and heroic acts of love and charity towards his fellow man.  For me, at least, that's how it was - I neglected to fully respect and honor this holiest of men and I'm a little embarrassed about admitting it... until now.
This past Tuesday, my family experienced a loss that really hit us deeply – a dear uncle of mine passed away in our home.  Although he'd been sickly in the last few months, his death still came as a shock when it occurred sometime in the early morning hours; he died unattended while sitting on his favorite recliner.  Our hearts are mourning his loss and I know we’ll continue to miss him for a very long time to come… but this is where St. Joseph unexpectedly stepped in, and through a string of "coincidences" made his gentle presence known to my family and me,  bringing consolation and  peace during our time of overwhelming sorrow.
First off, before continuing, let me just share that within the past year I've started making it a point to pray regularly to St. Joseph – usually in the mornings before I leave for work and when I attend noon Mass at our Honolulu Cathedral where there's a beautiful marble statue of him in the sanctuary (see the photo at the end of this post).  My prayer to the Saint is always the same – that he will protect my family and our household, as he protected his Holy Family… and that he intercede for me to be graced with a blessed and holy death, like how he was blessed to have in the presence of Jesus and Our Lady.

So going back to the day my uncle died… the whole Church should be well aware that it was St. Joseph's Feast Day on that day - March 19th - so for me it was the first glimmer of hope that my uncle's unattended passing may not have been "unattended" after all; that the day God chose for him to quit this world was not a mere coincidence since St. Joseph is the Patron Saint of a Peaceful and Happy Death.  I had hoped, that somehow there was really more to the auspicious date and that perhaps St. Joseph's intercession was involved. 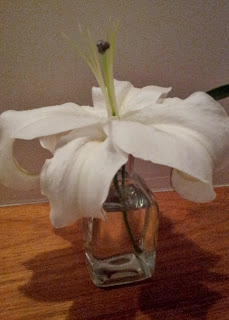 Furthermore, as our day progressed and more people learned of our loss, visitors came and went.  Surprisingly, among the people who stopped by to offer his condolences was a neighbor who we never really associated with except for an occasional wave whenever we drove pass his home.  In one hand he carried an envelope… but in the other, a small vase with a single flower in it – a very large lily in full bloom (left photo)!  Again, devotees who are familiar with good ol’ St. Joseph know that the lily figures prominently in the hagiography of the Saint, as it is often used to symbolize the purity of his soul.  Was this another sign from St. Joseph... or just another coincidence?  We wondered about it, but what we didn't know was that a more convincing confirmation was still yet to come...
Later in the evening after all our visitors had left, my family gathered together to pray the Glorious Mysteries of the Holy Rosary for the repose of my uncle's soul.  It was roughly about 10:30pm.  During our prayer, I became aware of two unusual smells that seemed to have suddenly materialized in our midst.  To my left, I recognized the familiar tobacco smell that had always clung to my uncle's body (he was a heavy smoker).  It wasn't an unpleasant odor, rather it was something that our family just got used to about him; I knew my uncle's spirit was present… but it was the delightful fragrance that came from my right hand side that surprised me more and held my attention - it was the scent of fresh lilies although there were no flowers anywhere near us, including the single lily blossom we received earlier in the day!
I kept quiet at first, but as the smokey smell and the fragrance kept wafting towards me in greater intensity, I finally broke down and asked our small group if anyone else detected what I was smelling.  Two others immediately said they smelled the smoke from my uncle's favorite brand of cigarettes but oddly no one else could smell the perfume of flowers. Needless to say, the rest of our Rosary Prayer was offered with much more fervency, as we all sensed we were in the presence of something extraordinary.  I had no doubt it was St. Joseph reassuring us that my uncle's soul was not lost and that the Saint had taken him under his special care during his final moments of earthly life. However, I also speculate that we were strongly being encouraged to continue praying for my uncle, as his soul had not yet merited the direct presence of God; we Catholics refer to it as Purgatory. 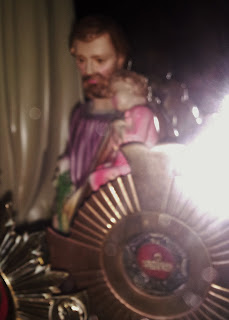 So as much as Tuesday had been a terrible day for our household, at the end of it, we were all comforted at the thought that a great Saint was watching over our uncle on the other side, and they had both (my uncle and St. Joseph) reached out to us in a special manner to assure us that my uncle was going to be fine.  The signs were subtle but they made a deep impression - how else would we expect St. Joseph to be?  His presence in Sacred Scriptures was itself subtle... yet despite the little he was mentioned in the Bible, whatever words were written about him made a lasting enough impression of his sanctity to countless of the Faithful throughout the centuries... including with me, too.
I greatly admire St. Joseph and appreciate his unique role in Salvation History, now more so.  I get it why so many Saints had such strong devotions to him (e.g. St. Teresa of Avila, St. Andre Bessette, Bl. Maria Repetto, etc.).  There's just something about his masculine - strong yet gentle nature - that reminds one of a grandpa, an uncle, or perhaps even one's own dad; it's rather comfortable and "homey".

So before ending this latest posting, I'd like to share the beautiful prayer below, which is one I've been praying every morning in front of a little statue of St. Joseph and a clothing-relic of his in my ministry's custody.  I feel in my heart that the coincidental signs and blessings we received on March 19th were due to the sincere and diligent recital of this prayer to "St. Joe", as I sometimes affectionately refer to him.  Please pray it and may you also experience the help of this Saint in your own life... and perhaps even at the end of it.  St. Joseph, help of the dying, pray for us. 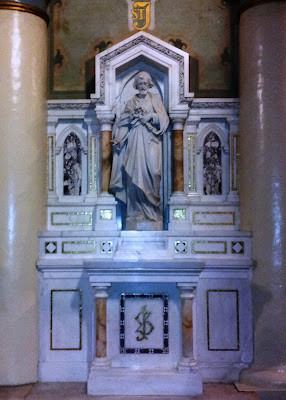 The altar of St. Joseph in the sanctuary of the
Cathedral of Our Lady of Peace, Honolulu
An Efficacious Prayer to St. Joseph
O, St. Joseph, whose protection is so great, so strong, so prompt before the throne of God.  I place in you all my interests and desires. St. Joseph, do assist me by your powerful intercession, and obtain for me from your Divine Son all spiritual blessings, through Jesus Christ, our Lord.  So that, having engaged here below your heavenly power, I may offer my thanksgiving and homage to the most loving of fathers.
O, St. Joseph, I never weary of contemplating you, and Jesus asleep in your arms; I dare not approach while he reposes near your heart. Press him in my name and kiss his fine head for me and ask him to return the kiss when I draw my dying breath.  St. Joseph, patron of departing souls, pray for me.  Amen.


*** This lay-ministry currently has a limited supply of Relic Prayer Cards, which are being offered to the readers of this blog at no charge (Hawaii or US-mainland residents only).  Each card bears a beautiful image of St. Joseph on one side and the above prayer on the other; laminated with a piece of cloth that was prayed over and touched to a rare relic of St. Joseph's cloak ("Ex Pallio") in the custody of this lay-ministry.  If you would like to receive one of these prayer cards (one card per person, per request), please email me - Peter - with your full name and mailing address at guadalupe_house@yahoo.com (indicate "St. Joseph Card Request" in the subject line).
Peter @ Guadalupe House Ministry, Honolulu