Saint of the Month - March 2013: Saint Catherine of Bologna 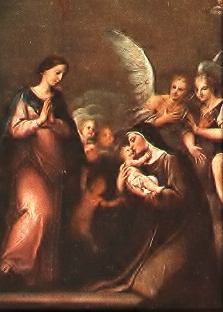 This particular Saint especially interests me because of her designated title as the “Patron Saint of Artists” (I like to draw)… St. Catherine de’ Vigri was born on September 8, 1413, to a noble family from Bologna, Italy. At the age of ten, she was appointed as the Maid of Honor to Princess Margherita from the Royal Court of the Marquis of Ferrara, and was consequently schooled in the fine arts along with her mistress; she excelled in playing the violin and was also an accomplished writer and painter (an example of her painting skills is seen below). Given her privileged status in life, one would have expected her to become worldly, and perhaps even tainted by vanity, but instead she was modest, kind, and charitable... and was genuinely pious in her disposition.
"Let every lover who loves the Lord come
to the dance singing of love..."
- Words of St. Catherine 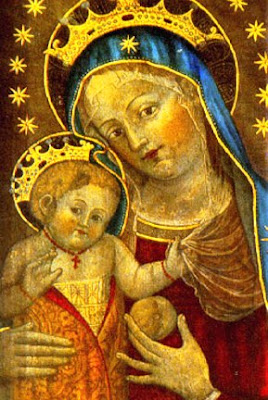 After the princess was married off, Catherine returned home to her family and announced her intention to enter into religious life at the age of fourteen. Not surprisingly, her parents were opposed to her choice of vocation, but nothing they said or did could break their daughter’s resolve to follow Christ's call. They reluctantly gave her their blessing and Catherine joyfully left home to join a small group of Augustinian Tertiaries in neighboring Ferrara. The early years proved difficult for the young noblewoman as the devil assailed her with severe temptations to quit religious life... but through her deep faith in God and the wise guidance of her spiritual director, Catherine persevered and overcame her spiritual trials.
Prompted by Catherine and the community's confessor, the Augustinian tertiaries set aside their Rule in favor of the more austere Franciscan Rule of the Poor Clares. With the change came an influx of vocations and members of the Ferrara Monastery, including Catherine, were sent to Bologna to found another community of Poor Clare nuns. Catherine was elected Abbess of the new foundation, and under her capable administration, the monastery flourished.  Visitors also began coming to the monastery seeking Catherine's prayers and advice.
In addition to being a natural leader, our Lord favored Catherine with many exceptional charisms including Ecstasies, Visions, and the gift of working Miracles. Fortunately, she recorded her spiritual insights and experiences in several manuscripts still in existence, the most notable of which was titled, "Treatise on the Seven Spiritual Weapons".  In regards to her visions, one of the most charming stories involved a Christmas visitation during which the Blessed Virgin allowed Catherine to cradle the Christ Child in her arms for a brief period of time. Reportedly, when Our Lady asked for the return of her son, the abbess hesitated for a few moments, so transfixed she was by the heavenly beauty of the infant Jesus.
As for the Saint's miracles, one of the most astounding accounts relates how several nuns were clearing a field one day.  One careless nun accidentally severed another nun's foot with a scythe and their frightful screams attracted the attention of the community including the Abbess.  Catherine calmly picked up the bloody foot and with the sign of the cross miraculously reattached it to the limb!
"The more afflicted we are the more we
ought to rely on aid from above."
- Words of St. Catherine 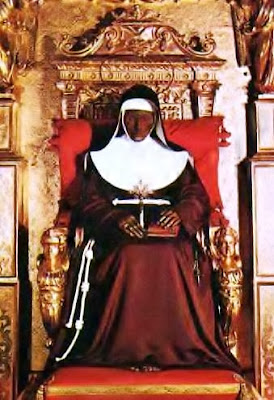 Catherine’s blessed death occurred on March 9, 1463 - she was only 49-years-old - and the whole city mourned her passing along with the Poor Clares. All were amazed at the appearance of her corpse, which was restored to youthful beauty and emanated a floral scent.  In keeping with the Franciscan tradition of holy poverty, she was buried in the earth with just a shroud to cover her remains.  Soon, there were reports of a sweet fragrance coming from her grave and that cures were occurring there, which prompted the sisters to exhume her body after being in the ground for 18 days - it was found perfectly intact, fragrant, and still flexible. Fresh blood even issued from its foot after one of the nuns had pulled off a piece of loose skin that was hanging from it!

Today, the body of the saintly abbess continues to remain incorrupt and is reverently enshrined in a sanctuary dedicated to her in Bologna (right photo). Although it has darkened over the centuries due to years of exposure to the heat and soot of countless votive candles, the bodily-relic maintains its inexplicable preservation. The Church officially declared St. Catherine de’ Vigri a Saint in 1712.  May she continue to pray and intercede for all of us.

A Reflection
God grants every one of us a special talent or gift.  How we choose to use that gift, will either impact the world for the good or the bad.

A Short Prayer
Dear St. Catherine, your many talents in writing, painting, and music brought glory to the Lord and to the Church.  Inspire us to use our own talents and abilities for the greater glory of God, as well.  Amen.