Another Round of "Faces of Holiness"...

I find this science very, very interesting - forensic facial reconstruction.  It's a field of science that aims to reconstruct the probable faces of the deceased based on standard reference points on their skulls.  More so, I get excited when the face being redone is a pre‐photography era SAINT; it's as though we now get to look at a photo of the individual rather than just a holy card based on someone's imagination.
I've posted on this topic several times before, but I accidentally came across a recent saintly facial reconstruction and, upon digging around, I actually discovered quite a few others.  In fact, it seems to be a trend for Catholic shrines/organizations to have their respective Saints' faces reconstructed, based on preserved skull-relics... and I like it!  So here we go with another round of "faces of holiness"...
+ +  St. John Nepomucene  + + 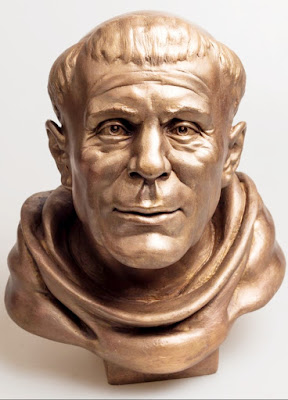 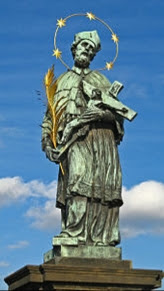 St. John's reconstructed face vs. a popular monument of the Saint in the Czech Republic
This Saint was a priest in the court of King Wenceslaus IV of Bohemia.  According to most accounts, he was the queen's personal confessor and, when the king suspected her of infidelity, he pressed the priest for personal details from her frequent confessions to him.  As one would expect of a devout priest, John refused and remained steadfast despite threats made against him by Wenceslaus.
The standoff between Saint and monarch culminated on March 20, 1393, when the king ordered the priest beaten then executed when he still persisted on remaining silent - John was thrown from the Charles Bridge, in city of Prague, into the frigid Vltava River and drowned as a result.
Deemed a Martyr, John Nepomucene was canonized in 1729 and is popularly considered the "Martyr of the Seal of the Confessional" and a Patron Saint of Bohemia, Czech Republic.  Interestingly, according to a tradition, his tongue was discovered preserved from corruption during a ritual exhumation in 1715, prior to his beatification.
+ +  Bl. Luca Belludi  + + 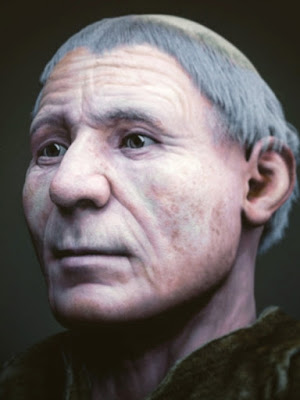 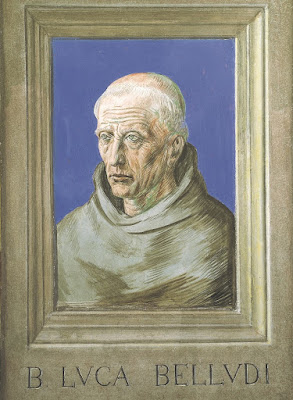 Bl. Luca's reconstructed face vs. an early depiction of him (a close likeness?)
This Blessed was an Italian friar, who was accepted into the Franciscan Order by St. Francis of Assisi (d. 1226), himself.  He was an assistant and close friend to St. Anthony of Padua (d. 1231), and died in Padua in 1286.  Like his illustrious friend, Bl. Luca was also a holy man and skilled preacher, and the Church recognized his sanctity through beatification in 1927.  His relics remain enshrined in the Basilica of St. Anthony in Padua.
+ +  St. Magnus Erlendsson  + + 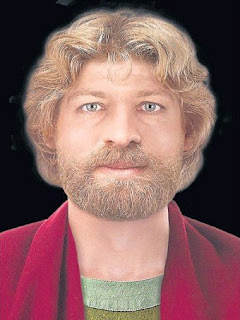 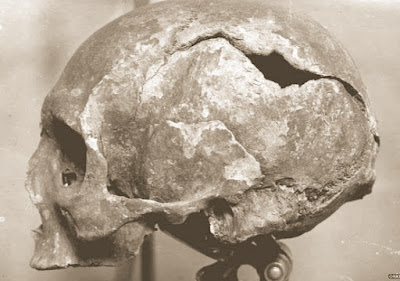 St. Magnus' face and the relic of his skull used in the reconstruction process
This obscure Saint was a Norseman; the Earl of Orkney in Norway.  Baptized Catholic, according to a certain biography, he was exceptionally pious and highly diligent in the practice of the Faith. Because of his gentle personality and his very open expression of Christian principles, Magnus was mocked by other pagan Viking rulers... but the people he ruled over benefited from his kindness.
Reluctantly caught up in the political intrigue and power struggles of his time and place, Magnus was betrayed and put to death by order of a rival Earl, via an brutal axe blow to the head, as evidenced by his skull.  Before dying he pardoned the executioner and his enemies, and prayed for them.
The spot where St. Magnus was killed and buried was rocky and barren ground, which reportedly grew over with lush green grass soon after his death.  He was considered a Martyr and many healings were subsequently reported at his grave, prompting his canonization in 1136.
+ +  The Jesuit Martyrs of Kosice  + + 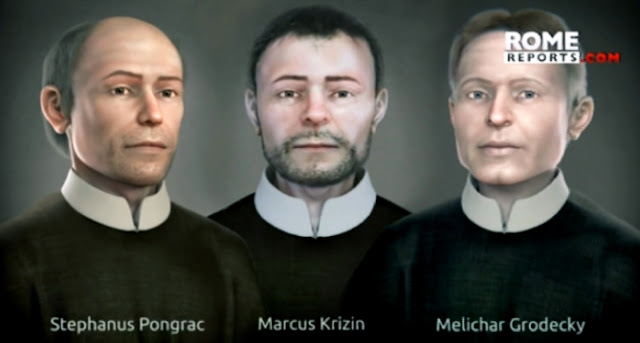 These Jesuit clergymen (their individual names are listed above) were heroically martyred by Calvinist Protestants.  All three voluntarily ministered to the Catholic minority in Kosice, which was a Calvinist stronghold during their day.  In 1619, at a time of rising anti-Catholic sentiments, they were arrested and beaten with the intent of having them apostasize, which the trio refused to do despite torture.
As a result of their steadfastness, the priests were beheaded and their bodies thrown into a ditch where they lay for 6 months.  A sympathetic countess claimed their remains and provided the Martyrs with a Christian burial; their tomb immediately became a beacon of faith for the persecuted Catholics of Kosice.  The Church eventually canonized them as a group in 1995.
+ +  St. Peter of Verona  + + 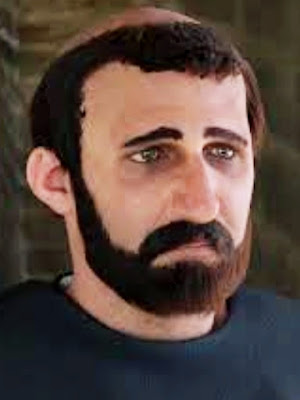 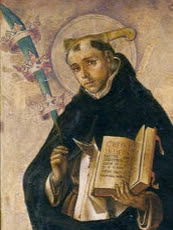 St. Peter's reconstructed face vs. an early depiction of him
This Dominican Saint was a celebrated preacher, as well as a reputable wonder-worker.  He preached against heretical sects in central and northern Italy - particularly against the Cathars - bringing many back into the Church.
Infuriated by his success, Catharist leaders in Milan hired a pair of assassins to kill Peter, which took place on April 6, 1252, while the Saint made his way to their city.  The murderer, Carlino of Balsamo, struck him in the head with an axe.
While he lay dying, St. Peter used his blood to scrawl his final profession of faith on the ground beside him: I believe in God... (from the beginning of the Apostles Creed).  His body was discovered and transferred to Milan, where it was met with immediate veneration and became a channel for miraculous cures.  Peter was so highly regarded, he was declared a Saint in March 1253, less than a year after his death.
As an uplifting postscript to this somber story, Carlino - the Saint's murderer - later repented of his crime and sincerely converted.  He joined the Dominicans in Forli and lived such a holy life he is now locally honored as Blessed Carlino of Balsamo.
+ +  St. Valentine  + + 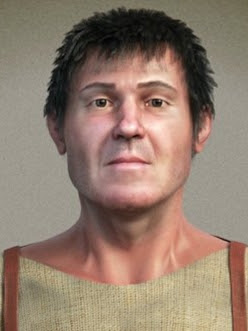 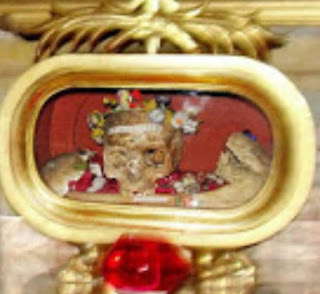 St. Valentine's face and the relic of his skull used in the reconstruction process
This Saint's Feast is observed every year by millions, worldwide, on February 14th, but really ‐ how many people out there actually know about his life history and spiritual significance?
St. Valentine was a priest or bishop who ministered in ancient Rome; he was captured during a time of intense Christian persecution in the early years of the Church.  Refusing to offer sacrifices to pagan gods and betray Christ, he was beheaded in 269 AD.
According to one popular account, the Saint, among many other good works, secretly united Christian soldiers and their brides in holy matrimony, despite the Roman Emperor's edict forbidding active soldiers to marry.  It's a scenario that likely lead to Valentine being romantically branded as the Patron Saint of Lovers.
+ +  St. Zdislava Berka  + + 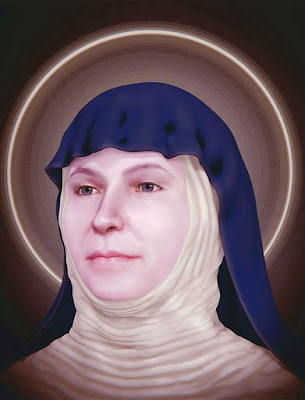 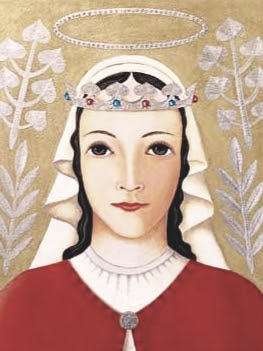 St. Zdislava's reconstructed face vs. an early depiction of her
A noblewoman of Czech descent, this Saint was highly pious as a child.  She actually attempted to run away from home at age 7 to become a hermit...  failed...  and was forced by her parents to marry a nobleman at 15-years-old.
Zdislava's husband turned out to be a brute, but through her patience and meekness, she gained his tacit approval to perform acts of charity and to establish two convents; all while dealing with her husband and raising their children.  Furthermore, her sanctity merited ecstasies and visions, and she reportedly performed miracles in her lifetime.
St. Zdislava Berka died in 1252 but wasn't canonized until 1995 - she's considered a Patron Saint of the Czech Republic, along with St. John Nepomucene.
... and finally - the Blessed Virgin Mary?
Obviously, this last image is not a true forensic facial reconstruction since Our Lady's body was assumed into Heaven, but the artist who created this beautiful and haunting piece - Julien Lasbleiz - based his representation of the Holy Virgin on the image of Christ, as imprinted on the Shroud of Turin.
Supposing the Holy Shroud is indeed the miraculous relic many purport it to be (I personally believe it is), then it really does capture the true face of Jesus... and since he only had one biological parent - Mary - it would be logical to assume that he closely resembled her.  So how genius is the artist in coming up with this notion and the unique rendering of our Blessed Mother?  Very clever.  I had to share it here after seeing it on several other websites because it really is an image worth contemplating. 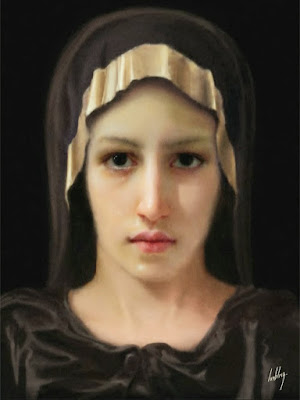 The Lasbleiz painting above... and side-by-side with a painting
of Christ that was also based on the Holy Shroud. 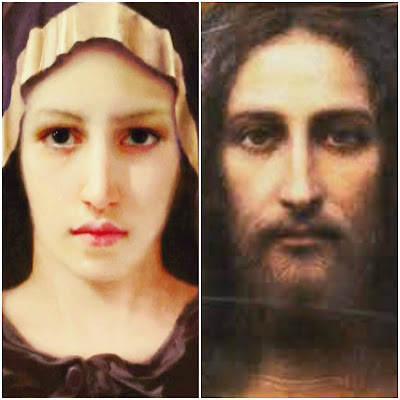 To view this ministry's other posts on forensic "faces of holiness", click here.

Guadalupe House Ministry, Honolulu
Guadalupe House is a one-man personal ministry, dedicated to promoting a healthy devotion to Our Lady and the Saints through a Pilgrim Statue and Holy Relics visitation program for parishes and private homes; through speaking presentations aimed at educating individuals about the relevance of Mary, the Saints, and Holy Relics in the faith-life of the Catholic Church; through evangelization efforts made, via this dedicated blog.