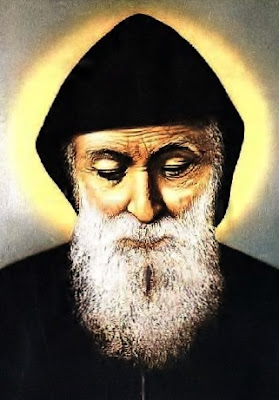 Joseph Makhlouf was born on May 8, 1828, to a poor Lebanese family. Being a pious boy, he entertained thoughts of one day becoming a religious but his family opposed his plans and put obstacles along his vocational path. At age 23, Joseph secretly left his home and entered the Monastery of Saint Maron at Annaya, where he became a monk and a hermit for the rest of his long life. He chose for his religious name, “Charbel”, after an early Christian Martyr who lived and died in the area.

Charbel distinguished himself through his fervent practice of the faith, his habitual silence, and his immense devotion to the Holy Eucharist. His reputation for holiness spread beyond the walls of the monastery and many sought him out for guidance and blessings. His clients were hardly disappointed, as many came away from his presence physically and/or spiritually healed of their ailments… or a recipient of some other miracle that Charbel had performed on their behalf.

The holy monk continued to practice strict self-discipline and mortifications until his death in December 1898. After his burial, the monks and the townspeople witnessed a brilliant light which emanated for several days above his grave. The excitement caused by the luminous display, along with the reported healings that were happening at the tomb, prompted the monks to exhume Charbel’s body to transfer it to a worthier tomb – to their amazement, the body was found completely incorrupt and as flexible as a living person. The body also began "sweating" a mysterious liquid (manna) that occasioned healings for those who invoked the dead monk’s intercession.

Charbel was elevated to the ranks of the Saints in October, 1977, and the Monastery of Annaya continues to attract pilgrims from all over the world, Christian and non-Christian alike.  Although his body is no longer preserved, and the manna has since ceased to flow, miracles are still reported at St. Charbel's tomb.  May he pray for our personal needs and the needs of the entire Church.

A Reflection
Saints are the special friends of God... and if you befriend the Saints, you also befriend God.

A Short Prayer
Dear St. Charbel, help us to practice holy silence that we may listen more clearly to the word of God.  Amen.