Saints of the Month - February 2020: The 7 Holy Servite Founders 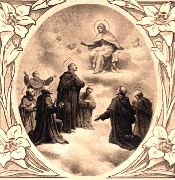 The Seven Holy Founders of the Servite Order

The Friar Servants of Mary, also popularly known as the "Servites", is an illustrious Order that was inspired into being in the Thirteenth Century, by the Madonna, herself... and it has maintained and promoted devotion to her ever since, particularly under her title of Our Lady of Sorrows.

It all began circa 1233, with seven merchants from Florence, Italy. These men, despite their wealth and status, were highly devout members of a lay association dedicated to honoring the Blessed Virgin. According to several accounts, while praying together in church, they were collectively privileged with an apparition of Mary, who directed them to forego the world for lives of prayer, penance, and meditation. Following this decisive experience, the group unanimously decided to withdraw together in solitude away from the distractions of their former lives. They settled their affairs, distributed their personal belongings to the poor, and bid farewell to their respective families before retiring to a place called Villa Camarzia in the outskirts of Florence. There, under the direction of a priest, they lived in poverty, relying on charity to feed themselves; following a strict program of spiritual discipline and prayer.

Not surprisingly, the departure of the seven caused a major sensation in Florence and the surrounding region. Some derided the men as lunatics but, more so, many came to regard them as living saints because of the austere and penitential lives they led. Soon, many were flocking to Villa Camarzia, seeking out the group for prayer requests, counsel, or to join them.  It proved to be a growing disruption to their humble mode of life.

In 1234 the original members and their aspirants relocated to the top of a remote mountain - Monte Senario - where they hoped to enjoy more peace and quiet. They built a complex of small individual hermitages around a chapel dedicated to Our Lady… but the move proved to be futile.  Rumors of their new whereabouts spread rapidly and the visits from outsiders resumed. 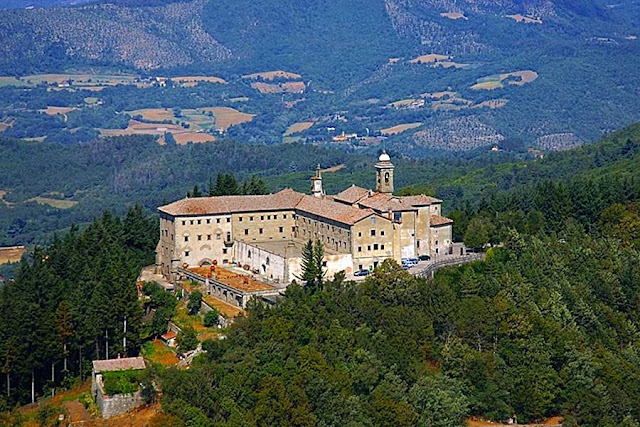 The Servite Monastery on the mountain of Monte Senario, Italy.

Another heavenly visit from the Mother of Christ in 1240 provided the group with further guidance - Mary instructed the founders to adopt the Augustinian Rule, while showing them a black habit that she wished them all to wear, moving forward.  Again, the seven complied, and their subsequent actions led to the formal establishment of the Order of the Friar Servants of Mary, aka the Servites.

The Servite Order grew quickly and realizing that it was impossible to completely detach themselves from the world, they expanded their work to include charitable service to the poor and the sick in nearby cities and hamlets, as well as conducted preaching missions (to combat the errors spread by the Cathari and other heretical sects).  The Order was officially approved by Pope Alexander IV in 1256.

In the meantime, while the Order blossomed and thrived, the Servite Founders occupied the rest of their lives with continued practice of virtue, enriched by extraordinary charism bestowed by the Blessed Virgin and the Holy Spirit. Several served in leadership capacity while others fired up the fledgling community by their service and faith-examples. The seven died between the years 1262 and 1310.  Below are their names and a brief summary of their attributes: 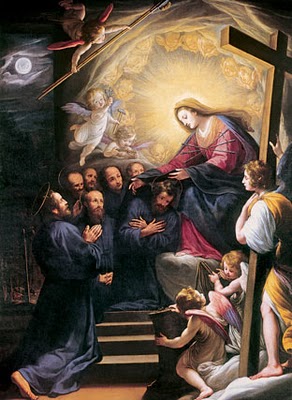 Our Lady, herself, bestowed the black habit
of the Servites to the Seven Founders.

+ ST. BONFIGLIO MONALDI was the original leader of the lay association to which the seven first belonged to. As such, he was nominated as the first Prior of the budding Order of the Servites, a role he fulfilled admirably.  He died on January 1, 1262.

+ ST. BARTOLOMEO AMIDEI was known for his exceptional charity and fervent love for God, which inspired all he came into contact with. It was a fitting attribute since his family name in English translates to “Love God”.  His death occurred on April 18, 1266.

+ ST. GIOVANNI BONAGIUNTA was known for his strict austerity towards himself, but was affable towards his brethren. He was elected Prior between 1256 and 1257 and served the position worthily.  He died on August 31, 1267.

+ ST. MANETTO ANTELLA also once served as the Order’s Prior. Under his wise and capable leadership, the Servites were successfully established in France.  His death occurred on August 20, 1268.

+ ST. GHERARDINO SOSTEGNO & ST. RICOVERO UGUCCIONI were particularly close - the embodiment of spiritual brotherhood. Through their friendship, they encouraged and supported each other, along with the rest of the Servites, in their ascent to the heights of sanctity.  Both reportedly died, hours apart, on the same date - May 3, 1282.

+ ST. ALESSIO FALCONIERI was celebrated for his outstanding spirit of purity and humility. He reportedly declined the opportunity to become a priest in order to remain a simple brother in service of his brethren. He is also the paternal uncle to St. Juliana Falconieri, the foundress of the female branch of the Servites.  St. Alessio was the last of the seven to die on February 17, 1310 at nearly 110-years-old.

Pope Leo VIII collectively canonized these great holy men in 1888. Their relics are enshrined together in the main church of their Order on Monte Senario.  May they pray for our individual needs and for the needs of our Catholic Church.