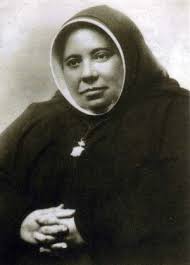 St. Genoveva Torres Morales was a holy woman whose sanctity was forged in adversity and shaped by the love of God.  Born on January 3, 1870, this future foundress had a tough life early on.  She was the youngest of six children born to a family of modest means from Almenara, Spain.  By 8-years-old she was orphaned and lost four siblings, as well, from illness… leaving her and a surviving brother in the care of relatives.

At 13-years-old another tragedy struck – a tumor on Genoveva’s left leg led to a festering sore that became seriously infected, then gangrenous, necessitating an amputation of the limb to save her life.  The operation was done in the home without the use of anesthesia - by a not-so-skilled surgeon - so Genoveva suffered excruciating pain during the amputation… and she continued to suffer lifelong discomfort in the same leg and had to use crutches for the rest of her life. 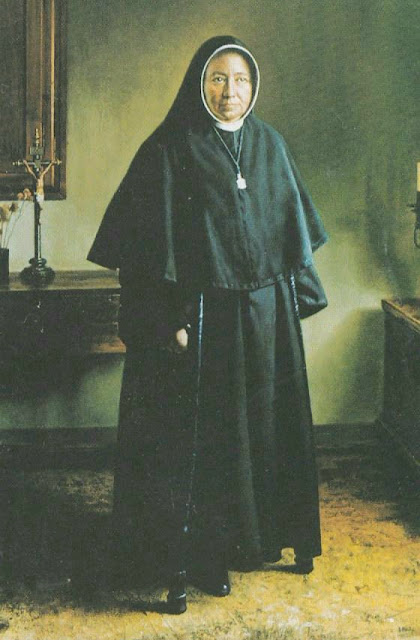 The Saint suffered from chronic pain due
to a botched amputation of her left leg.

To add to Genoveva’s woes, her brother, Jose, was impatient and overbearing towards her, and it took a further toll on her overall well-being.  As a way of coping, Genoveva became withdrawn, preferring solitude and reading – especially spiritual books; an escape from her daily troubles, which shaped her personality and developing spirituality.

The youthful Genoveva’s faith was boosted when she lived for a period of nine years, beginning in 1885, in a charitable home run by the Carmelites of Charity founded by St. Joaquina Vedruna de Mas (d. 1854).  There, the example of the nuns and the guidance of her spiritual director, Fr. Carlos Ferris, inspired in her a desire to join this active branch of the Carmelite Family. Unfortunately, because of her physical disability, she was not admitted into the congregation.

Undaunted and still seeking to live a consecrated life, Genoveva left the Carmelites of the Charity in 1894 to live in a small home with a couple of pious laywomen.  Together, they lived in community, praying and performing works of charity in their neighborhoods, especially focused on assisting and rehabilitating poor women.  As the group grew and their work succeeded, it attracted the attention of a priest, Canon Barbarros, who recognized the immense value of their ministry. 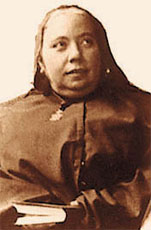 Despite physical difficulties, joyful service
was a hallmark of St. Genoveva's life.

In 1911 the Canon urged Genoveva to found a new congregation; advice she took to heart and, with his support, she founded the Congregation of the Sacred Heart of Jesus and the Holy Angels in Valencia.  In due time, the nuns came to be called the “Angelicas” (the “angelic women”) in reference to the “… Holy Angels” in the congregation’s name and probably for their good works among the people.

Despite chronic poor health, Genoveva worked beside the other “Angelicas” and tirelessly expanded their mission to other parts of Spain.  Worsening health forced her to resign as the congregation’s Mother General in 1954.  Her final years were preoccupied more and more with contemplation and prayerful union with Christ, and it earned her the nickname of the "Angel of Solitude".

The foundress died at the age of 86 on January 5, 1956 and was declared a Saint by Pope John Paul II on May 4, 2003. The Church celebrates the Feast Day of St. Genoveva Torres Morales every year on the anniversary of her entrance into Paradise.  In the midst of this noisy world, may she guide us in cultivating and growing an intimate union with our Lord in the peaceful solitude of our hearts.


St. Genoveva, pray for us!