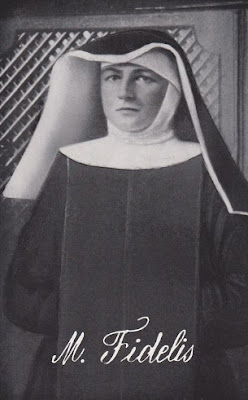 The Venerable
Sr. Maria Fidelis Weiss
A Witness to Faithfulness to God


Her name in religion was Sr. Maria Fidelis and it basically means "Mary of Faithfulness"; a most fitting name for this worthy nun since she was a model of faithfulness to God's Divine Will in her difficult, yet remarkable, vocation.  Note - she isn't officially a Saint yet; nor is she even a Blessed... but she is certainly on her way... and being that she is virtually unknown outside of her native country of Germany, I am especially enthusiastic to share about her life here on my blog.

Based on information I was able to gather from the internet, Sr. Maria Fidelis was born on June 12, 1882, in a town called Kempten in Bavaria, Germany. Her birth name was Eleonore Margarete Weiss and her family was highly devoted, which contributed greatly to the piety displayed early on by the young Eleonore.  Her First Holy Communion was a decisive moment in the child's life as she experienced a profound awareness and union with Christ that only increased with time.

By aged 16, Eleonore had already decided to enter a convent and was directed to the Franciscan community in Reutberg by her confessor. Due to her youthful age, the Sisters delayed her admittance with them so for the next few years she continued her schooling in the Franciscan convent in Lenzfried where she learned needlework and how to play the organ.

In October 1902, being 20-years-old, Eleonore bid goodbye to the secular world and reapplied with the Reutberg convent where she was accepted the second time around.  There, she received the religious name by which she is now more commonly known - Maria Fidelis, or simply Sr. Fidelis.


"I belong to the dear Mother of God and she is my mother."

In the convent Sr. Fidelis professed her final vows on June 21, 1904, and was assigned the task of organist and handwork teacher at the girls' school run by her community.  By all the accounts I've read, she was an exemplary religious and outwardly displayed a sincere love for neighbor; an even deeper love for Christ; and a most tender devotion to the Blessed Virgin.  As for her interior life, it ran even deeper and most of what transpired within her soul was only shared with her spiritual director - a Fr. Johann Mühlbauer - to whom she revealed everything out of holy obedience.

"Everything for Jesus and for souls!"

What we do know of Sr. Fidelis' interior spirituality was that she quickly blossomed into a mystical and self-sacrificing soul, generous in her desire to cooperate with the Lord in saving those headed down the wide road to perdition.  In fact, she offered herself wholeheartedly to Jesus for the salvation of sinners, going so far as to practice various forms of self-mortification such as fasting.

Eventually, the nun began experiencing supernatural graces from God, which included ecstasies, heavenly visions, and the hidden Stigmata (she felt the pain of the wounds in her limbs every week between Thursday evening and Friday).  It appears she was partly prepared and purified to receive these grand favors through a period of the "dark night of the soul", which she endured from sometime in 1908 through 1911... and also through the patient suffering of episodes of diabolic attack (on one occasion she was seen being violently thrown against a pillar by invisible hands).

"You are wedded to me forever.  You are mine as I am all yours."

Through all of her sufferings, Sr. Maria Fidelis admirably lived up to her second name - "Fidelis" - by maintaining faithfulness to God's unique plan for her.  For each severe trial she successfully endured for the good of sinners, she was compensated with divine consolations and with even richer spiritual gifts.  In 1920 she received the most pinnacle of graces that any soul could possibly attain in this life - the Mystical Marriage, which she celebrated in the sublime presence of the Holy Trinity.  It was then that she heard from the lips of Jesus, himself, the profound words referenced above.

"A little violet I want to be, which blooms silently in secret for God alone."

After living a seemingly routine life of prayer and service at the convent/school, Sr. Fidelis died at the age of 40 on February 11, 1923; it was the Feast of Our Lady of Lourdes to whom she was deeply devoted.   It was only at her funeral that her spiritual director revealed to the rest of the Sisters and the outside community in Reutberg what an extraordinary mystic they had in the deceased nun.  The Franciscans were astonished, but it just goes to show how truly humble Sr. Fidelis had been in life and how successful she was in passing herself off as just another [normal] member of her convent.

After being enlightened about the hidden sanctity of Sr. Fidelis, the other nuns privately prayed to her for all sorts of help and favors... and their requests were often answered.  News of the dead nun's power to effectively intercede with God spread outside of the convent walls and a popular cultus developed around her memory, which lead to the opening of her Cause for Sainthood in 1936.  The Cause is still ongoing and in June 2007 she was declared Venerable.

Promoters of Sr. Maria Fidelis are eagerly seeking two verifiable miracles to help advance her Cause to Sainthood.  Let us pray together with them for her speedy Canonization...

Prayer for the Glorification of Ven. Maria Fidelis of Reutberg
(translated and adapted from the official German prayer)

O God, give us the spirit of your love with which you have granted your faithful servant, Maria Fidelis, so lavishly!  Multiply our trust and hear our prayer, that you will soon, for your greater honor and for the blessing of our people, bestow upon her public devotion and glorification!  Amen.

* * *  Visit the official website for the Cause of Ven. Maria Fidelis Weiss by clicking here.  * * *

Email ThisBlogThis!Share to TwitterShare to FacebookShare to Pinterest
Labels: Saints of the Month, Stigmata