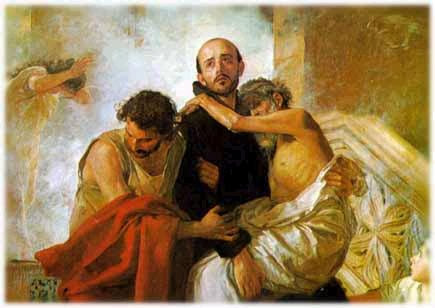 For those who love books or reading, here's a wonderful Saint for you… born to highly devout parents in 1495, in the Portuguese hamlet of Montemor Novo, St. John of God reportedly left his hometown at the age of nine to travel with a wandering missionary preacher.  Nobody really knows why he left, or why the priest even allowed him to do so, but he eventually ended up in Oropeza, Spain, working as a shepherd on a farm.  At the age of 27, John again abruptly left to join the Spanish army and began a military career that took him up and down Europe, as well as into Africa. While in the company of wayward soldiers, all traces of the faith that was instilled in him by his parents was quickly forgotten and he was reported to have lived a life of excess and all manner of vice.

After leaving the army in his late-thirties, John lived temporarily in Gibraltar before finally settling in Granada, Spain, where he opened a little bookstore that provided him with a decent income.  It was during this period of his life that he experienced a spiritual reawakening after hearing a fiery sermon preached by St. John of Avila (d. 1569).  His remorse for past sins was so profound, he distributed his worldly goods to the poor and went about Granada beating his chest while loudly invoking the mercy of God.  John's public displays of repentance became so bizarre his neighbors believed that he had gone insane and they had him committed to a mental asylum until he was released through the intervention of St. John of Avila.  The Saint took the penitent under his wing and wisely guided him in channeling his energy and good intentions into charitable work.

Finding peace and a sense of purpose in his life, John rented a small cottage where he welcomed the poor, the sick, and the dying.  He went about Granada begging for food, clothing and other household supplies that he used in his daily ministry.  A vision of the Christ-Child bestowed on him the name - "John of God" - by which he became popularly known.  Initially ridiculed, his personal ministry eventually earned him the respect of the townspeople and his work spread to nearby cities with the support of his bishop, wealthy patrons, and a team of nursing volunteers. Further adding to his saintly reputation were numerous miracles that John reportedly worked for the benefit of his patients.  One such occurrence involved a burning hospital - while rescuing patients trapped by the fire, the Saint repeatedly walked through the raging flames without suffering any burns to himself or the people that he saved. 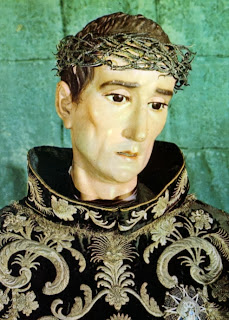 Curiously, John's iconography - paintings and statues - sometimes depicts him wearing a crown of thorns.  I wondered about it and after some diligent research, I was surprised to learn that the Saint may have been a Stigmatist, who wore an invisible crown of thorns.  It was related that on one occasion, John was granted a vision in which he saw our Lord and the Blessed Virgin.  Our Lady approached him and placed the crown upon his head, while saying, "John, it is by thorns and sufferings that you must win the crown my Son has waiting for you in Heaven."  The Saint felt the pain penetrating deep into his head but replied most admirably, "From your hand, my Lady, thorns and sufferings are welcome; they are my flowers and my roses."

Toward the end of his life, John became seriously ill with pneumonia after he selflessly jumped into a river to save a drowning child.  While praying on his knees in his humble cell, he quietly died unattended, on March 8th, 1550 (his 55th birthday).  Reports state that his brethren were alerted to his passing by the miraculous tolling of the city's bells and a powerful heavenly fragrance that emanated from John's corpse.  His body was discovered in its upright position and maintained its reverent posture up to the day of his funeral. Although in his lifetime John never intended to found a religious congregation, his principles of welcoming, charitable service inspired the establishment of the Hospitaller Brothers of St. John of God, which claims the Saint as its founder. 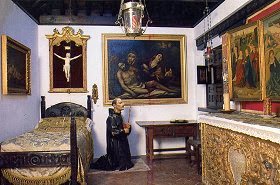 The room in which St. John of God died, now a museum and a
chapel housing a few relics of the Saint's personal belongings.

The Church canonized St. John of God in October 1660 and his body is said to be mysteriously preserved in its shrine in Granada, Spain.  He is considered the Patron Saint of booksellers, caregivers & hospital workers, and the mentally ill.

A Reflection
“Labor without stopping; do all the good works you can while you still have the time.”  ~ Words of St. John of God

A Short Prayer
Dear St. John of God, inspire us to spend our remaining time on earth helping others.  Amen.