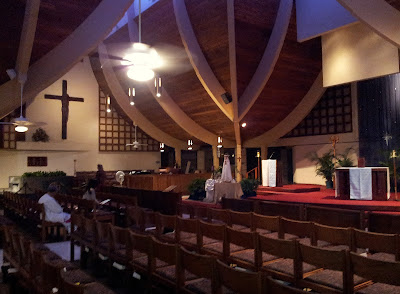 The beautiful interior of St. Anthony's Church in Kailua, Hawaii

This evening, my Pilgrim Statue of the Blessed Mother was invited to be a part of the Vigil Mass for the Feast of the Immaculate Conception. It’s always special to see an image of Our Lady, up front and center, when we celebrate a Marian Feast in our parish church because one feels as though the Virgin’s presence is much more tangible when a statue or painting representing her is displayed during the service. At least, that’s how I feel about it. Plus, it was especially meaningful to me knowing that it was my ministry’s statue that was being utilized to help people make a connection with our sweet Heavenly Mother.

At tonight’s festivities, our priest allowed us to pray the Holy Rosary before the Mass started as a way of further honoring Our Lady. Many parishioners showed up early to participate, which was really great. The service was beautiful, as usual, and Fr. Clarence did a great job in extolling the many virtues of the Blessed Virgin Mary during his homily before  we sang several Marian hymns. For some special reason, people were really involved with the service tonight and it was truly inspiring; even Father commented after about how he was almost moved to tears by the congregation’s participation. 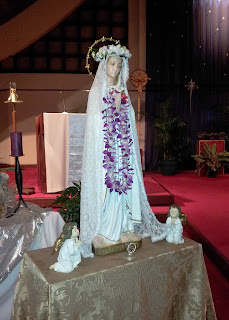 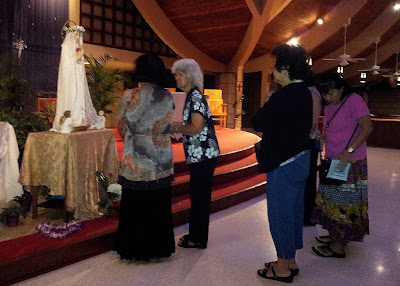 Parishioners gathered around Our Lady's pilgrim statue and Sacred Relic after the Vigil Mass ended.

After Mass several parishioners approached the statue to venerate Our Lady and her veil-relic, as well as to take photos with their smartphones.  It never fails that people always seem attracted to the pilgrim statue whenever it’s publicly displayed... and I could sense the sincere love and devotion that was being expressed as prayers were offered before the image of our Heavenly Mother.  I have no doubt that Our Lady’s spirit was with us this evening, blessing us abundantly... and for that, I was also very grateful.
* * * * * * The Hour of Grace * * * * * *


Lastly, since tomorrow is December 8th, the actual Feast of the Immaculate Conception, I’d like to take this opportunity to remind or inform readers about the “Hour of Grace” that Our Lady spoke about in her Rosa Mystica revelations made to the Italian seeress, Pierina Gilli, in 1947. Our Lady referred to it at least twice during two separate apparitions to the visionary:


+ November 22, 1947:
“… On the 8th December, at noon, I shall appear again here in the Basilica (of Montichiari).
It will be the Hour of Grace. This Hour of Grace will produce great and numerous conversions.
Hardened and cold hearts resembling this marble (the church floor) will be touched by Divine
Grace, and they will become faithful to Our Lord in loyal love.”
+ December 8, 1947:
“I am the Immaculate Conception...
It is my wish that every year, on 8th December, at Noon, the Hour of Grace for the world be
celebrated.   Many divine and bodily graces will be received through this devotion. Our Lord, my Divine Son
Jesus, will send His overflowing mercy if good people will pray continuously for their sinful brother.
One should very soon notify the Holy Father of the Church, Pope Pius XII, that it is my wish that
the Hour of Grace for the world be made known and spread throughout the world.   If anyone is unable
to visit his church, yet will pray at noon at home, he will also receive graces through me.”

Please consider observing the Hour of Grace at Noon tomorrow.  The recommended prayers to be prayed during the hour are the Holy Rosary and the Miserere (Psalm 51), as well as prayers for the conversion of sinners.  God bless you and may the Rosa Mystica - the Immaculate Conception - intercede for you.


Click here for more information about the Rosa Mystica devotion.