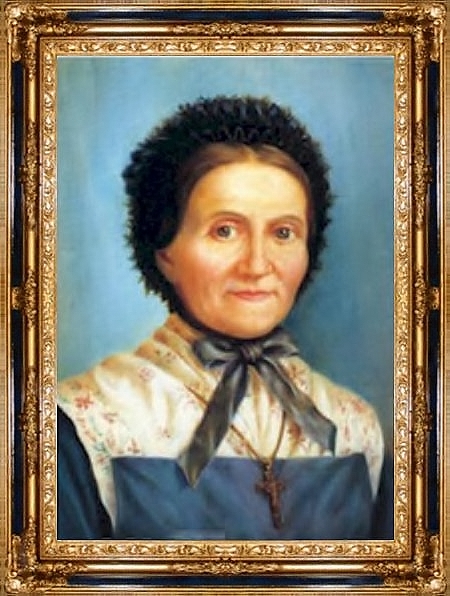 Marguerite Bays was the daughter of simple and devout farmers from the small hamlet of La Pierraz, Switzerland. It was providential that she was born on September 8th, 1815, the Feast of the Nativity of the Blessed Virgin Mary, as she had a deep, filial love for the Mother of the Lord since early childhood. For the most part, Marguerite’s life was quite uneventful - she lived and died in her small town, had a limited education, and quietly worked as a self-employed seamstress from her family's little cottage. During her spare time she was either involved with some sort of activity with her local parish church, or visiting with the sick and dying in her local community. She also loved children and was often seen teaching them prayers and catechism, or leading the youth in pilgrimages to a nearby shrine to the Blessed Virgin.

Life turned extraordinary for Marguerite at the age of 35. A chronic stomach complaint developed into intestinal cancer causing her much pain and discomfort. She turned to the Holy Virgin in fervent prayer and asked her to intercede with her Divine Son… oddly enough, not for a complete cure, but rather to “exchange” her illness for another type of suffering that would allow her to share more directly in the Passion of Our Lord; the way of the cross would be her sure road to Heaven.
﻿﻿ 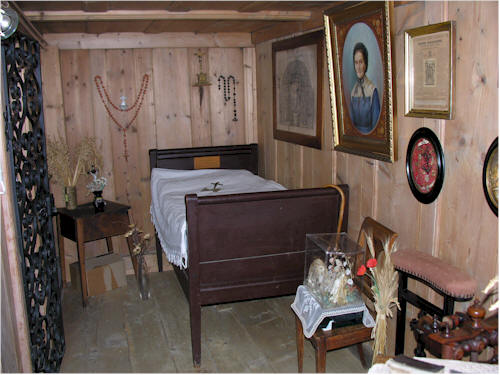 ﻿﻿St. Marguerite's tiny bedroom, where she relived the
Passion of Christ every Friday evening for many years.

Marguerite’s prayer must have pleased God greatly  for on December 8th, 1854 - almost at the exact time when Pope Pius IX proclaimed the Dogma of the Immaculate Conception - she was miraculously healed from the cancer.  As further response to her prayer, shortly after, Marguerite began falling into ecstatic raptures on Fridays, during which she relived the painful Passion and Crucifixion of Jesus Christ.  Bleeding wounds opened in her hands and feet and it was apparent that she was marked with the Sacred Stigmata.  In her humility, Marguerite hid the wounds from the outside world to the best of her ability, but it was eventually discovered and word spread about the miracle.  So she then asked the Lord to grant her the Passion Ecstasies in the late-evenings when she would less likely attract unwanted attention and this request was also granted by God.  Hence, she prayerfully suffered, undisturbed by curious eyes, but supported by her close-knit family.

Despite the painful imprints of the Stigmata, Marguerite strove to live as normal as possible and continued her active participation with parish life.  Her devotion to the Holy Eucharist became extraordinary as her union with Christ deepened.  During her final illness, she suffered greatly and could not keep down most food... but she was sustained almost entirely by the Holy Communion she received infrequently.  When her death occurred on June 27th, 1879, she showed no fear and little sign of suffering, but rather, her person reflected an immense joy and love, as she anticipated her ultimate meeting with our beloved Lord.  Like Christ Crucified, she died on a Friday at 3:00pm.


A Short Prayer
Lord, gently humble us… by allowing us to see ourselves as you see us.  Amen.

** NOTE:  This post was updated since its 2012 posting date to reflect Marguerite's designation as Saint, effective 10/13/2019.  Congratulations to the Catholics of Switzerland, as well as the rest of the Church - we have a new official, spiritual hero!