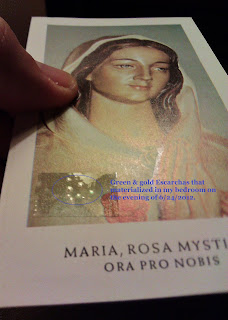 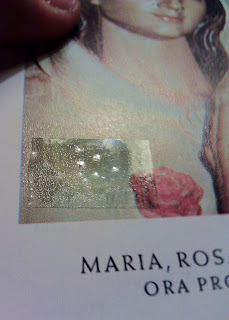 Green and gold Escarchas, collected with clear scotch tape after they mysteriously
materialized in my bedroom... on my clothes, a blanket, and a reliquary.

I'm not really sure what's going on, but Escarchas - mysterious glitter-like flakes of Heavenly Manna - have again manifested.  This time, the Escarchas appeared in my bedroom... scattered randomly on my clothing, a blanket, and on a 2nd Class Relic of St. Gianna Beretta Molla kept on my personal altar; not a lot, but definitely enough to be clearly noticed by me and by family members who I showed them to.

Unlike the incident that occurred at my workplace a few days ago, this second round of Escarchas were a bright green color mixed with a little gold, rather than silver and gold as in the earlier incident.  According to an interesting article from the popular Spirit Daily Catholic website, different colored Escarchas supposedly symbolize different meanings - Green is for Hope; Gold is for Healing... and on this other website - Visions of Jesus Christ.com - the phenomenon of Escarchas seem to be particularly linked to the Rosa Mystica Devotion.  I have two Rosa Mystica pilgrim statues in my personal custody so I strongly feel, that this time around, the appearance of the Escarchas are connected with Our Lady, the Mystical Rose; a devotion that I love and enthusiastically promote.

Incredibly, Escarchas made a third appearance... and of all places, it happened at my workplace again.  The Escarchas manifested intermittently throughout the day, but I noticed that they often materialized whenever I happened to be prayerfully looking at a photo of a Rosa Mystica statue that I had on my desk.  More so, I am convinced that this grace has a strong connection to the Rosa Mystica Devotion.

Three trusted coworkers also witnessed the materializations, which were many gold, green, and silver Escarchas... and even a single red one!  The photo below shows some of the Escarchas that I gathered with scotch tape today, including the lone red flake visible to the left of the bunch. 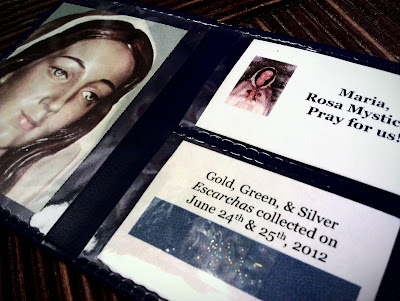 A third manifestation of Escarchas... a special gift received
through the intercession of Our Lady, the Mystical Rose

﻿Again, my spirit was filled with awe and profound gratitude towards Jesus and Our Lady concerning this particular grace - I am also deeply humbled at having experienced this wonder firsthand for a second and third time.  Something in my heart tells me that this is just a precursor of graces yet to come from Our Lady, the Rosa Mystica, so please keep my little ministry in your valued prayers as I continue my efforts to make this devotion more known.  Thank you and God bless you.