The Miracle Image of Our Lady of Guadalupe

This ministry's devotion to Our Lady of Guadalupe extends way back to 1994 when I - Peter, this Ministry's Administrator - started a prayer group and weekly prayer meetings centered around a garden statue of the Holy Mother of Guadalupe. The meetings lasted for almost nine years, for the duration of my stay at my former Kailua studio, and I affectionately called the place 'Guadalupe House' after the statue. When I moved to another home, I kept the name for this current ministry as a way of commemorating the wonderful spiritual favors received at Guadalupe House.  For those not familiar with this particular title of the Blessed Mother, this is its history...

In December 1531, the Blessed Virgin appeared four times to an Aztec Indian convert, baptized and renamed, 'Juan Diego'. She appeared on a hill outside of Mexico City called Tepeyac and requested a chapel to be built there in her honor. The Virgin sent the visionary to deliver her request to the local bishop - Juan de Zumarraga - but he was met with skeptism and speedily dismissed.

In her second appearance to Juan Diego the Virgin charged him to once again deliver her words to the bishop, and this time, Juan was taken a little more seriously than at his previous visit. Zumarraga listened intently as Juan repeated the message but the bishop asked for a sign from the Blessed Mother before he would agree to construct the requested church. 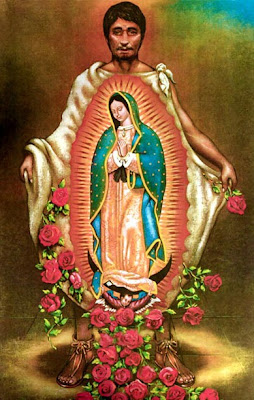 The bishop's proof came in the form of fresh Castillian roses, which Our Lady caused to bloom on Tepeyac Hill despite the brisk winter weather, and more wondrous still... through a beautiful image of herself that she miraculously imprinted on Juan's 'tilma' (left image - a native garment similar to a cloak or apron). Bishop Zumarraga was completely convinced by the miracle he witnessed and immediately erected a chapel on the site of the apparitions. In a separate (fifth) apparition to Juan's seriously ill uncle, who the Mother of God cured, she expressed her desire to be honored in Mexico as ‘Santa Maria de Guadalupe’, which originated the title given to her sacred image.

Following the great sign, other graces - including the resurrection of a dead man(!) - were granted through the image, prompting millions of the indigenous Indians to request baptism into the Faith... thus, ending the difficulties that the missionaries were having in coverting them to Christianity, as well as, easing the tensions between the Aztecs and their Spanish conquerors. Again, as God often did in the history of Christianity, he had employed our Blessed Mother to lead souls to her Divine Son, Jesus Christ... and to bring reconciliation where it was urgently needed!

Today Juan Diego's tilma continues to baffle science. Studies conducted on the image confirm that it's NOT a standard painting at all, but rather the result of unexplainable color changes to the top-most fibers of the cactus cloth. Furthermore, the survival of the tilma itself is considered inexplicable as the lifespan of this type of cloth is normally about twenty years, yet the tilma has remained perfectly intact for hundreds of years despite its earlier exposure to harsh conditions (e.g. burning candles, humidity), which would've contributed to its speedy deterioration.

The Catholic Church has declared Our Lady of Guadalupe the Patroness of the Americas and the Protectress of the Unborn, and the Basilica dedicated to her in Mexico City continues to draw not just the locals, but other pilgrims from around the globe. Each year on December 12th - the Feast of Our Lady of Guadalupe - massive crowds converge in the Basilica's square to honor the Blessed Virgin with prayer, song, and dance.

Juan Diego, Our Lady's humble instrument, has also been fondly remembered and celebrated throughout the centuries.  In 2002, the late Pope John Paul II further honored him by declaring him a Saint; his Feast Day is observed on December 9th. 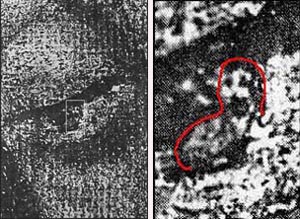 An old portrait of St. Juan Diego (left) and the right eye of the Virgin of Guadalupe
showing a mysterious image of a bearded man, presumed to be the Saint

Five Remarkable Facts About the Image of Our Lady of Guadalupe:

A video showing the music from Our Lady's
tilma being played on a harp.  Incredible!
"... Let not your heart be disturbed.  Do not fear that sickness, nor any other sickness
or anguish.  Am I not here, who is your Mother?  Are you not under my protection?  Am I not your health?
Are you not happily within my fold?  What else do you wish?  Do not grieve nor be disturbed by anything."

~ Words of Our Lady of Guadalupe delivered
through St. Juan Diego