The Holy Eucharist: The Physical Presence of Jesus in Our World 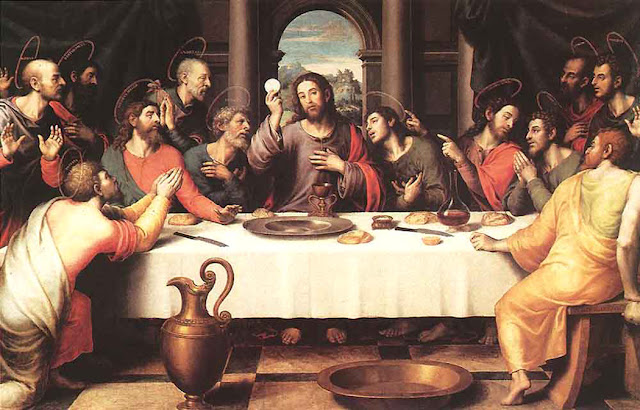 “This is my body, which is given for you.  Do this in remembrance of me.”

~ Words of Jesus at the Last Supper

Today - July 26th, 2011 - is the Feast of Corpus Christi... the day set aside by the Roman Catholic Church to honor and celebrate the Blessed Sacrament of the Altar. We, as Catholics, are bound to believe that the Eucharist is truly the body and blood of Our Savior, Jesus Christ; not just a mere symbol of his body, but his actual flesh and blood hidden under the humble appearance of bread and wine. This teaching is admittedly very hard to comprehend… and even during Jesus’ time, scriptures tell us that some of his followers had difficulty accepting it as well when he spoke about it; some even left him over it…

… but despite the difficulties that people had in accepting his words, Jesus never wavered in his claim that he would feed his followers with his very own flesh and blood; his words were clear:

"For my flesh is true food, and my blood is true drink.  Whoever eats
my flesh and drinks my blood remains in me and I in him."

Today, the Catholic Church continues to uphold Christ’s words in the face of growing disbelief; sadly, even among its own members… but God, in his infinite wisdom and power, has seen fit to aid the Church in her efforts to uphold the truth of Jesus’ divine presence in the Eucharist by performing countless miracles through the agency of the Blessed Sacrament. Below are just five cases from Italy, Portugal, Venezuela, and India, that were officially recognized by the Church as genuine ‘Eucharistic Miracles’:


+ The Miracle of Lanciano, Italy 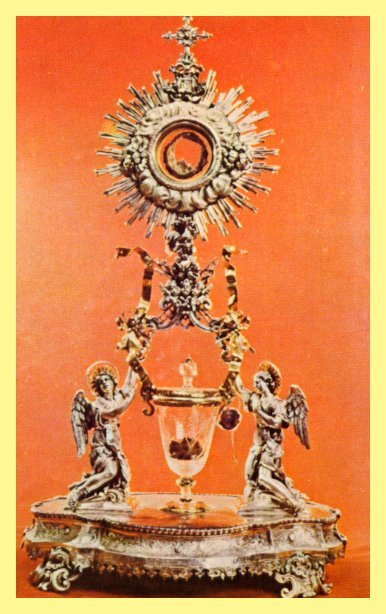 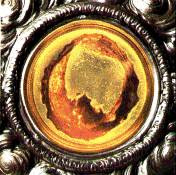 The Eucharistic Miracle of Lanciano - the Heart of Jesus in flesh and blood.

In the year 700, a priest who was plagued with doubts concerning the real presence of Christ in the Eucharist, received a stupendous sign from God. He was offering Mass one day, and upon pronouncing the words of consecration, the wafer in his hand was transformed into actual flesh, while the wine became blood in the chalice. Needless to say, the priest’s faith was restored by the miraculous event and Lanciano became a popular destination for devout pilgrims wanting to venerate the Host turned to flesh. Furthermore, modern science has confirmed the flesh and blood to be human in origin, with the Host being actual cardiac tissue - the Sacred Heart of Jesus! - sliced from a cross-section of a heart in such a way that would be impossible to do without modern precision surgical tools.


+ The Miracle of Santarem, Portugal 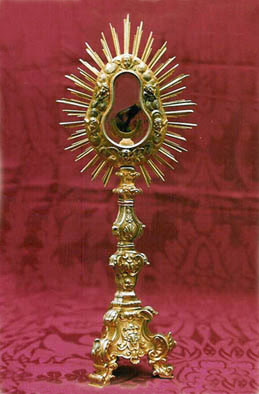 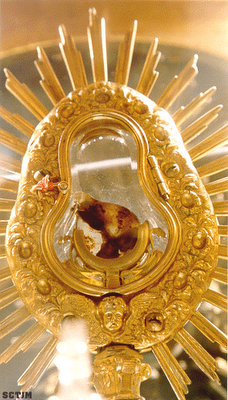 Two views of the miraculous Host of Santarem.

In 1225 a woman in an unhappy marriage pretended to receive communion in the parish church, in order to obtain a consecrated Host as payment to a sorceress for a love potion. The foolish woman wrapped the Eucharist in her veil, and upon leaving the church, it inexplicably began to bleed profusely. Frightened, she returned home rather than going to the sorceress, and hid the Host in a trunk.  It was later discovered by her husband after a brilliant light began shining from within the wooden chest, which awoke him and drew his attention to it. The wife tearfully confessed her sacrilege, after which the couple spent the rest of the evening praying for God's forgiveness. The parish priest was summoned in the morning to return the miraculous Host to the church, where it has been the object of deep reverence ever since.


+ The Miracle of Siena, Italy 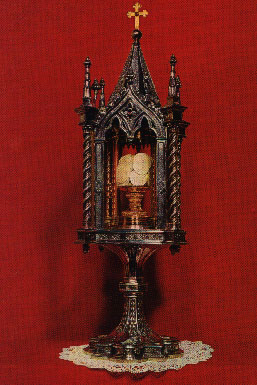 The miraculously preserved Hosts of Siena.

On August 14, 1730, unscrupulous thieves conducted a grave sacrilege by breaking into the Church of St. Francis and stealing the golden ciborium, which enclosed 300+ consecrated Hosts. The crime was discovered on the following morning prompting a search for the missing Hosts. The Hosts were found on August 17, stuffed in an offertory box of a neighboring church and soiled from dust and debris that had accumulated in the wooden box. The citizens of Siena responded to the discovery by immediately offering prayers of reparation for the offenses committed against the body of Christ, and the Hosts were placed in the Tabernacle with the intent of allowing them to naturally disintegrate; inexplicably, they never did! For over 275 years the Hosts remained perfectly incorrupt, with the fact being confirmed throughout the centuries by numerous scientific inquiries into the matter. The last official investigation in 1921 reaffirmed the preservation of the Hosts, which continue to defy the laws of nature. Church officials who have consumed a few of the Hosts have also sworn to the fact that they have not gone stale, but rather, they have maintained the texture, taste, and smell of fresh Eucharistic wafers. 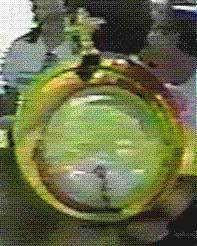 A still photo from a video showing the miraculous bleeding Host
from the church-approved Marian apparition site of Betania.

This Eucharistic Miracle actually involves a single Host through which two separate supernatural occurrences were manifested. The Host first gained attention on December 8, 1991, after it bled during its consecration in the chapel of the approved Marian apparition shrine of Betania, Venezuela. The local Bishop later had the Host enshrined in a convent in neighboring Los Teques where it again became the object of wondrous phenomena after an American pilgrim filmed it on November 13, 1998, beating like a heart and surrounded by flames (again, the Sacred Heart of Jesus!).  Click on this link to view the actual film footage of the 2nd (1998) miraculous event: Eucharistic Miracle of Los Teques


+ The Miracle of Chirattakonam, India 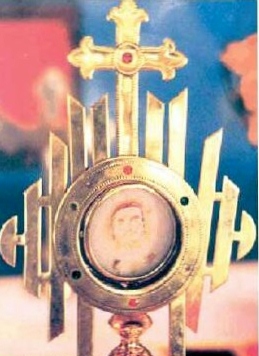 The miraculous Host of Chirattakonam with its
bloodstain-image of the Holy Face of Jesus.

On April 28, 2001, parishioners of St. Mary’s Indian church were astounded to witness the materialization of three red stains on a Host that was publicly exposed for adoration. The priest - Fr. Karoor - also noticed the unusual marks and placed the Host back into the tabernacle for safekeeping. After a few days, he retrieved the Eucharist to examine it and was stunned to discover that the bloody stains had arranged themselves into an image of the Holy Face of Jesus on the surface of the Host! The priest wasted no time in informing his local bishop who carefully investigated the event and approved it as a miracle… the Host has remained preserved and the Holy Face image is still clearly discernible to pilgrims who venerate this remarkable, visual reminder of Christ's true presence in the Eucharist.

"... Teaching them to observe all things whatsoever I have commanded you:
and behold I am with you all days, even to the end of the world."