Saint of the Month - March 2018: Saint Angela of the Cross 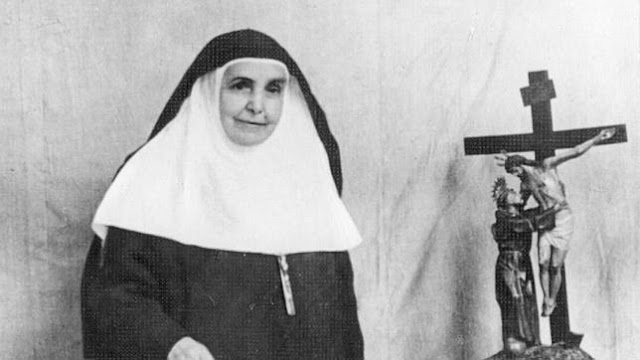 St. Angela of the Cross
Mother of the Poor ~ Feast: March 2nd


Our Saint for this month is named Angela of the Cross and she was born on January 30, 1846, in Seville, Spain.  Baptized just three days after her birth, she was named Maria de los Ángeles Guerrero y Gonzalez but affectionately called Angelita (little angel).  Her pious family was of modest means with the father, Francisco Guerrero, being a wool carder by profession; the mother, Josefa González, was a seamstress. The couple had fourteen children, although only six survived past childhood. Francisco, who was also a cook for a local monastery of Trinitarian friars, died when Angelita was still young, but her mother who was the laundress and seamstress for the same monastery lived into old age.

Angelita received scant school instruction, as was usual at that time among girls in her social class; by the age of 12 she went to work in a shoe-making workshop to contribute to the family income. She was employed there with brief periods of interruption until the age of 29, under the fortunate care of a highly devout businesswoman who encouraged Angelita and the other workers to pray the rosary together and to read the lives of the Saints. 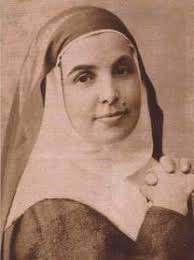 St. Angela in the early years after founding her congregation.

At 16, Angelita's employer put her in contact with a Fr. José Torres Padilla, a priest in Seville with a reputation for holiness, who would have a driving influence on her religious vocation; he became her spiritual director.

At the age of 19, Angelita requested entry into a convent of Discalced Carmelites but was not admitted due to her weak health; four years later she tried religious life again by joining the Daughters of Charity of St. Vincent de Paul in which, during her novitiate, she was sent first to serve in a local hospital, and later in Cuenca and Valencia. At this time, however, the young woman's health unexpectedly declined and she was plagued with chronic vomiting, which eventually forced her to leave the Vincentians.  Curiously, after her departure, the vomiting ceased as mysteriously as it had started, leaving no lasting effects.  She returned to her former job in the shoe shop.

Sometime in 1873, Angelita had a decisive mystical vision in which she saw an empty cross in front of another cross on which Jesus was crucified.  She instinctively understood that Christ was inviting her to sacrifice herself on the empty cross - to be "poor with the poor in order to bring them to Christ", per her own words - and she pronounced private vows of perpetual consecration to God.  She also conceived the idea of founding a new charitable ministry, which she referred to as the "Company of the Cross". 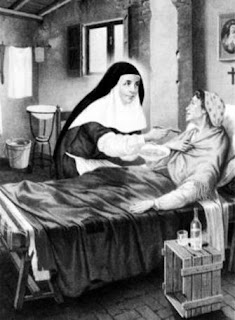 On January 17, 1875, with very few resources and three like-minded companions, Angelita began her life's work. Using money provided by Josefa Peña, one of the founding members of the fledgling community, they rented their first "convent" - a room in a house on San Luis Street in Seville - from where they originated their brand of charitable service towards the poor.  The women would go out into the community in twos to visit with the sick and the needy; one would attend to the patient at bedside, while the second carried out any domestic work that needed to be done before both returned to their little room. As the work took shape, the four aspirants took on religious names with Angelita calling herself Sr. Angela de la Cruz, in homage to her earlier vision; the others referred to her simply as Mother Angela.

In 1876, Seville was hit by an epidemic of smallpox and this intensified the efforts made by the Sisters of the Cross to help those afflicted and other less fortunate, bringing their work even greater admiration throughout the city and an influx of members.  In this same year, Mother Angela received the formal permission and blessing of her new congregation by the Archbishop of the diocese, Cardinal Spínola. From then the work spread rapidly, with the foundress beginning numerous convents located mainly in western Andalusia and the south of Extremadura. These houses continued Mother Angela's vision of material and spiritual assistance to the poor; the ill and the dying; the homeless; as well as expanding the congregation's outreach to provide care for orphaned children.

Seeking further security for her congregation, Mother Angela traveled to Rome in 1894, where she personally met Pope Leo XIII, who granted the initial decree for the approval of the company, later signed by Pope Pius X in 1904. The tomb-shrine of St. Angela of the Cross, as venerated in Seville, Spain.

After an exemplary life of prayer and outstanding service to the needy, Mother Angela died on March 2, 1932, as a result of a stroke; she was 86-years-old. People of all social classes mourned her passing and paid her their respect before she was buried in the crypt of her congregation's mother house in Seville.  St. Pope John Paul II declared her a Saint on May 4, 2003, and her precious body is reportedly incorrupt.

Novena to St. Angela of the Cross

God of all goodness, who illuminated the virgin, St. Angela,
with the wisdom of the cross to recognize your son, Jesus Christ,
in the poor and forsaken sick; to serve them as a humble slave.
Condescend to grant us the grace we ask through her intercession.

Inspire in us the desire to follow St. Angela's example in
embracing our own daily cross in union with Christ Crucified,
and serving our brethren with love. We ask you this through
Jesus Christ, your son and our Lord.  Amen.

[Pray an Our Father, a Hail Mary, and a Glory Be in honor of St. Angela]