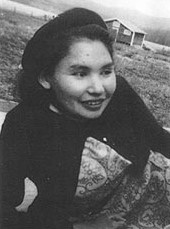 Rose Prince
A Heavenly Blossom of the Carrier Nation

It's more than plausible that there are many, many Saints in Heaven who are not known to us.  In life their holiness was hidden from our eyes and known only to God.  They drew no attention to themselves but lived quiet and humble lives of prayer and service to others.  Yet, sometimes, God in his mysterious wisdom reveals a glimpse of greatness that was in our midst unrecognized.  Such is the hidden life of Rose Prince of the Carrier Nation from Lejac in British Columbia, Canada.  Signs of her sanctity first came to dramatic light in 1951.

During that year a decision was made to relocate several graves from near the Lejac Indian Residential School to a much larger cemetery nearby. During the transfer process the cemetery caretaker opened the coffins to examine the physical condition of the deceased when he was awestruck by what he found in the casket of a native woman named Rose Prince.  She had been buried two years earlier.

The worker was amazed to find both Rose's body and clothing perfectly preserved while all the other bodies were in different stages of disintegration, including those who had passed after Rose. The caretaker immediately notified the resident priest and nuns who had personally known the Carrier maiden in life, and they all noted the body to be in perfect condition. She seemed to be only peacefully asleep and there was even a hint of a smile on her lips. It was widely hailed as a case of saintly "incorruptibility", as the sight of Rose lying in such a remarkable state reminded the witnesses of the deep piety she exhibited during life.  So who was this enigmatic woman?

Rose Prince was born in 1915 in a small house behind the convent at Fort St. James.  She was the third of nine children born to Jean-Marie and Agathe Prince. Both her parents were devout Catholics. Rose's father was descended from a line of chiefs who ruled the Carrier Nation that was centered around Stuart Lake.  Jean-Marie often translated for the priest during services and led the prayers and singing.  He also helped to look after the church building.

Rose's mother was raised by the Sisters of the Child Jesus in Williams Lake because her own mother died when she was very young. Along with her beautiful auburn hair, Agathe passed on to her daughter the quiet serenity that characterized her life.  She was known to be a gentle woman of strong faith. Jean-Marie and Agathe went to school together in Williams Lake where they fell in love, married, and returned to live in Fort St. James. Their children first attended the little school in Stuart Lake.  Then in 1922 the government built a larger school at Lejac where their children were then sent.

Sr. Bridie Dollard, who taught Rose, described her as "a hard worker and a brilliant student, kind, lovely, gentle and compassionate." Some of her fellow students remember her as a happy child. Her goodness and understanding drew her peers to her, one of whom recalled, "Sometimes I would feel resentment towards the Sisters or the other girls, or someone who said something to me, and then she would talk to me about it and say to pray for the person instead of feeling resentment.  She was full of advice like that."

Although she came from a loving home, Rose's life was not easy.  She developed a curvature of the spine that resulted in a hump on one side of her back (one account I read blamed it on an incident during which a heavy bench was accidentally dropped on her causing a spinal injury).  The pain made it awkward for her to get around and very difficult to kneel.  Yet all those who gave testimony about Rose agree that never once was she heard to complain about her condition.

In 1931, while Rose was at school in Lejac, her mother died during an influenza outbreak.  Her death was extremely painful for the child.  Soon after she also lost her two younger sisters.  From that time on, although her brothers and sisters went home each summer, Rose chose to stay behind at the convent.

At this time Rose also began to develop a deep life of prayer and seemed to have an abiding sense of the love and presence of Jesus.  An indication of this comes from her cousin Celina John, who related, "Rose lived only for the glory of God. She didn't live for anything else. One time I was curious so I asked her why it is that she never goes home with her brothers and sisters. She kept silently going on with her work, then finally she looked up, she smiled and said, 'I've got my parents in here'. I didn't understand what she meant. I thought she meant the Sisters. Then I finally said, 'Who are they?' She answered, 'Our Blessed Mother and her Son, Jesus, they are my parents. I feel so close to them here, I just don't want to go out and I have no intention of going anywhere.' That is what she told me."

After she graduated Rose asked to stay on at the school because she felt loved and respected there, and was accepted as part of the staff.  To a friend she confided that it was the best choice for her.  Here she could be herself, enjoy quiet and privacy, and practice her faith.  Her spiritual life continued to bloom and she had a particular devotion to the Eucharist.  In spite of the difficulty that her deformity caused her when kneeling, she spent hours at prayer in the chapel before our hidden Lord.

As an adult, religious practices were optional, yet Rose faithfully received Jesus at daily Mass.  She fulfilled many jobs at the school: secretarial work, mending, cleaning, embroidering and sewing.  Books were a favorite pastime and she often helped the younger children learn how to read.  No one ever heard a cross word from her and she did her tasks with great cheerfulness, often singing or humming while doing her chores. She was also a gifted artist who loved collecting and examining flowers before painting them in great detail on altar cloths and tabernacle veils.

Rose eventually contracted tuberculosis and by 1949 had grown so weak that she was confined to bed. She was admitted to the hospital on August 19th and quietly passed away that evening while Mass was being offered for her.  She was 34-years-old.

The Sisters prepared Rose's body for burial and were amazed that rigor mortis had not set in. Her body lay in an awkward position because of her spinal deformity so a pillow was placed under her head to position it better.  Dressed in white, one of the nuns remarked that Rose looked like an angel lying in her coffin, and this was how she was discovered on that fateful day two years later.

Soon after the discovery of Rose's incorrupt body, a spontaneous devotion sprung up around her grave, which has now become the site of an annual pilgrimage each Summer.  Cures have been reported with many being effected through the devotional use of the soil from her grave.

As of this writing, the Cause for Canonization for Rose Prince has yet to be officially opened in the Diocese of Prince George, British Colombia.  However, the parish priest of Fraser Lake has personally informed me that there are definite plans underway to do so; the annual pilgrimage grows larger each year, as graces continue to be reported. Let us pray for Rose's Cause to be speedily opened for the greater glory of Jesus Christ and His Church.

Heavenly Father, you shared so deeply with Rose Prince of the Carrier Nation, your gift of serenity and your love for creation; grant through her intercession that we may share your serenity and your peace of soul, and may we too rejoice in the beauty of creation that surrounds us on every side.  And finally, through her intercession we plead for this favor (mention your prayer intention here), which we ask with confidence. In your loving kindness, grant this through Our Lord Jesus Christ and the Holy Spirit.  Amen.