If you can't tell by now - I have a keen interest in forensic facial reconstruction, especially when the subject is a Saint or Blessed who lived before the advent of photography.  It's simply fascinating for me to see what their actual facial features may have looked like in comparison to pretty holy cards that may be in circulation of the holy person. Fortunately, within the past few years, there seems to be a growing interest in reconstructing the faces of famous religious figures.  As an enthusiastic fan of our Saints, I welcome the trend.

With the above being stated, last year a team of scientists from South America reconstructed and unveiled the faces of three revered Peruvians - Sts. Juan Macias, Martin de Porres, and Rose of Lima - using sacred relics of their skulls.  At the beginning of 2016, the same scientific team unveiled the face of yet another holy personage from Peru; this time around it was the likeness of a little-known Dominican mystic who was exemplary for her deep devotion to the Poor Souls...

Bl. Ana [Monteagudo] of the Angels

This holy woman was born in 1602 in the town of Arequipa, Peru, where she became a nun and was honored as a living Saint in her lifetime.  According to her biographers, Bl. Ana was from a distinguished family but she gave up her inheritance to enter the local Dominican Monastery of St. Catherine after being prompted to do so by a vision of the monastery's namesake, St. Catherine of Siena (d. 1380). There, our heroine was famed for her high degree of sanctity, as well as her apparent mystical gifts, which included bilocation, miracles, prophecy, and visions.

The reconstructed face of Bl. Ana of the Angels (center) flanked by a fairly modern
rendition of her (left) and an old painting of her from her monastery (right).  The older
portrait appears to be a fair likeness of the Blessed.

During one particular vision, ten years before her death, Bl. Ana reportedly saw Our Lady and St. Nicholas of Tolentino (d. 1305), who commended to her fervent prayer the plight of the Poor Souls in Purgatory.  The humble nun accepted the mission entrusted to her and willingly suffered progressive blindness and paralysis as a victim-soul for those undergoing spiritual cleansing in the afterlife. She died in 1686 with a solid reputation of holiness and continues to be much loved in Peru along with its three other Saints.

This facial reconstruction project was actually conducted back in early 2015 by the same Brazilian 3D designer who worked on the faces of the four Peruvian Saints, and that of St. Anthony of Padua in 2014... but it only just came to my attention recently. With St. Mary Magdalen being one of the most revered and inspiring figures since the birth of Christianity, I was quite excited when I accidentally came across the story while researching the one of Bl. Ana of the Angels.  Some may be wondering - where'd the skull come from for this forensic reconstruction?  Read on below... 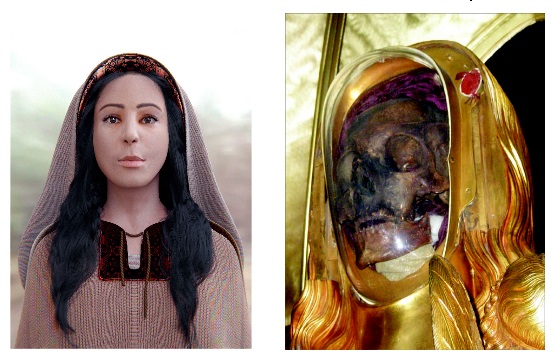 Is this the face of St. Mary Magdalen?  Reconstructed using her alleged skull
enshrined in a basilica in southern France.

According to Sacred Tradition, after the ascension of Christ, St. Mary Magdalen escaped persecution in the Holy Land, along with St. Lazarus (who Christ resurrected), St. Martha, and other disciples of Jesus by sailing in a small ship that landed near Marseilles in southern France. There, Lazarus was installed as Bishop and the group of Christian exiles preached the Gospel, successfully converting many in the region.

Mary eventually retired as a hermitess in a large mountain cave in what is now Saint-Maximin-la-Sainte-Baume where she lived an austere life.  After her death, she was lovingly buried by the early Christians. Her original tomb was venerated until her skeleton was hidden for safekeeping and lost in the early 700's during a period of Saracen invasions.

In 1279 St. Mary's tomb and remains were rediscovered amidst signs and wonders, and documented confirmation, and her bones and skull are now enshrined in the Basilica of Saint-Maximin-la-Sainte-Baume. After the reconstructed face of St. Anthony of Padua was unveiled in June 2014, the basilica commissioned the reconstruction of Mary Magdalen's face using the alleged relic of her skull; the startling result, as seen above, was unveiled to the world on July 19, 2015, in conjunction with her Feast Day celebrations that year.

The reconstructed features reveal St. Mary Magdalen to be a strong and beautiful woman, as many have imagined her to be; as many visionary-mystics such as Bl. Anne Catherine Emmerich (d. 1824) have described her to be.  So thanks to science and technology we have the wonderful opportunity to look upon the enigmatic face that was the first to bask in the glory of the risen Lord!