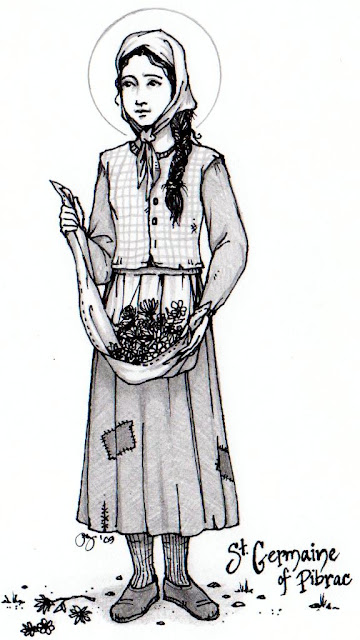 "Blessed are the poor in spirit, for theirs is the kingdom of heaven...

I enjoy cheering for the underdog. Specifically, when it comes to a good person who unfairly gets the short end of the stick in a situation... then struggles against all odds to overcome major obstacles. This little Saint was one such person. Sickly all her life, she was unloved and neglected by the very people who should have cared for her. Nonetheless, she had a heart full of unwavering faith that helped her to triumph over all adversity.


... Blessed are they who mourn, for they shall be comforted...


Born in 1579, Germaine was the daughter of a peasant couple in the village of Pibrac, France, where she lived all her brief life. From her earliest years, our protagonist was accustomed to suffering: first off, she was born with an obvious birth defect - a paralyzed withered right hand; then, while still in her infancy, her birth-mother unexpectedly died; and if that weren't enough, Germaine also developed scrofula, a tubercular condition affecting the lymph nodes, which caused ugly sores on her neck.

... Blessed are the meek, for they shall inherit the earth...

Germaine's father, Laurent Cousin, seemed to have remarried quickly, but rather than being sympathetic to the child, her new stepmother, a woman named Hortense, abhorred her and sadistically abused her. When siblings came into the picture, things got even worse for the poor girl - the stepmother, citing health concerns over the other children contracting the scrofula, persuaded Laurent to send Germaine out to live in the cold barn, away from the rest of the family. There, the youngster, slept on a bed of straw and twigs, under a stairwell, and was fed on table scraps and pieces of stale bread by her cruel stepmother.

... Blessed are they who hunger and thirst for righteousness, for they shall be satisfied...


Each day, Germaine rose at the break of dawn to take the family's sheep out to pasture and, while out in the fields, she occupied her time in prayer and innocent distractions until the morning tolling of the church bell summoned her to daily Mass. At the end of the day, she returned to her place in the barn where she ate her sparse meal before turning in for the evening; warmed only by heat generated by the sheep in the barn. Up until her death, this was Germaine's normal routine, day in and day out. One would have expected her to become bitter and resentful, but instead, she was just the opposite. People acquainted with the Saint reported that she was meek and kind; never complaining about her situation or speaking ill of her family; radiating peace despite her personal hardship... and she was genuinely devout.


... Blessed are the merciful, for they shall obtain mercy...


As time passed in Pibrac, it became apparent to the villagers that there was more to their shy, resident outcast than what met their eyes. Little by little, Germaine's fellow townspeople began witnessing strange occurrences - big and small wonders - that surrounded the little shepherdess. For example, years after Germaine's passing, two of her neighbors gave sworn testimony to a Church tribunal that, on more than one occasion, they had seen her part (in "Moses-like" fashion!) the waters of a stream heavily swollen by rain, with the sign of the cross, so as to make it to the church for Mass. In another memorable episode, a small crowd was drawn to the sight and sound of Hortense beating Germaine, while loudly accusing her of "stealing" bread from their home. All the while that she was quietly receiving the blows, the Saint was seen clutching a small bundle hidden in her apron. When she was ordered to uncover the contents of her apron, instead of pieces of bread, a bouquet of fresh fragrant flowers was revealed despite the fact that it was mid-winter!  From that day, forward, the tide turned in Germaine's favor. 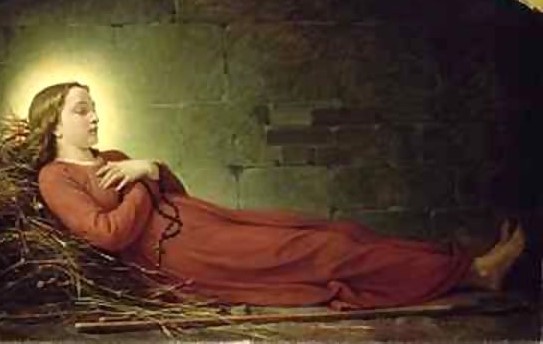 The solitary death of St. Germaine Cousin in her family's barn.

The townsfolk started seeing Germaine in a new light and treating her with respect rather than with the indifference and ridicule that was previously shown her. They paid close attention to her every move and her pious habits - the way she knelt in prayer regardless where she happened to be when the bell tolled at noon for the Angelus; her habit of taking her flock into dangerous areas infested with wolves, yet neither she nor any of her sheep were ever harmed; the way she generously shared her meal of bread with people less fortunate than herself; and the mysterious way the same meager portion of bread would somehow end up being enough despite the number of people the Saint shared it with. Even her parents had a change of heart and they invited her to once again live in the house with them; an invitation that Germaine declined, preferring the peaceful solitude she learned to enjoy in the barn.

One chilly morning, in 1601, Germaine's father awoke to hear the sheep still in the barn, which was unusual. When he went to check on the matter, he discovered his daughter lifeless on her mattress of straw. She had passed, alone, sometime in the middle of the night at only 22-years-old. Soon after, two strangers to Pibrac - friars passing through the area - arrived in the village excitedly inquiring if a holy maiden had died the night before. The friars explained that they were traveling on foot and had spent the night, outdoors, in the outskirts of the town. They were awakened at midnight by the mysterious sound of angelic singing and witnessed a beam of light coming down from the sky, upon which a procession of celestial beings descended into the town. When the group ascended back up to the heavens, they had among them another person - a young woman.  The people immediately surmised that it could only have been the pious Germaine entering into her eternal reward.


... Blessed are the peacemakers, for they shall be called children of God...

The humble shepherdess was laid to rest inside the parish church, which was an indication of the deep reverence that was accorded Germaine towards the end of her life. An account of her funeral stated that the Saint's features took on a unearthly beauty that the deceased did not possess in life. Furthermore, in 1644 - over 40 years after she died - her body was unexpectedly found incorrupt and still lovely after a grave digger opened her tomb in order to place another body in it. The shovel he used had injured the nose and fresh blood dripped from a wound, as though Germaine had only recently died. In addition, the sores of the scrofula on the neck had healed... and the wreath of field flowers around her head, which she was buried with, was still fresh despite the many decades in the tomb!

... Blessed are they who are persecuted for the sake of righteousness, for theirs is the kingdom of heaven."

Not surprisingly, the discovery of the body reignited interest in Germaine and crowds flocked to venerate the sacred relic of the preserved body. Hundreds of cures were reported in connection with it. Sadly, in 1793, during the peak of the infamous French Revolution, Germaine's relics were desecrated and nearly destroyed after local revolutionaries broke into the parish church and reburied her remains with highly corrosive quick-lime. When the body was recovered, parts of it had deteriorated leaving only her bones. 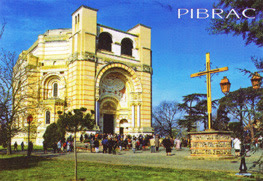 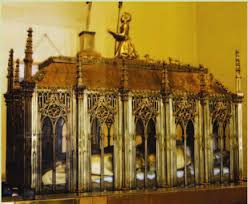 The Basilica in Pibrac, France, where the Saint's relics are enshrined in a magnificent
reliquary (right photo).  A composite figure of St. Germaine lies within the shrine.

After delays caused by civil upheavals, the Church eventually canonized Germaine Cousin in June 1867. What remains of her relics are preserved in the Basilica of Pibrac, where devotees continue to venerate Germaine's memory, especially on June 15th, her Feast Day.

A Short Prayer
Lord, help us to live the blessings of the Beatitudes in the same worthy manner that St. Germaine did in her own life.  Amen.