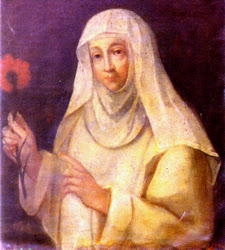 The featured February Saint is notable not just for her personal sanctity, but also for the incredible spiritual phenomena that surrounded her life with uncommon frequency. St. Catherine de' Ricci worked miracles and experienced Ecstasies; Visions; Bilocation; the Stigmata of Christ... and after her death, her body defied the laws of nature by remaining incorrupt.

Born in the city of Florence, Italy, on April 23, 1522, her secular name was Alessandra Lucrezia Ricci.  The Ricci Family was made up of wealthy bankers and merchants so our Saint grew up in a home that was both comfortable and socially prominent.  When she was still a little child, Alessandra's mother died and her father was remarried to an aristocrat named, Fiammetta Diacceto.  Fortunately for the girl, her new mother was a woman of deep faith, who sensing in Alessandra an early attraction to spirituality, wisely guided and encouraged the youngster in pious pursuits.
By the time she was in her early teens Alessandra had already resolved to become a nun and she set her eyes on the Convent of San Vincenzo Ferrer in nearby Prato, where its members strictly observed the Rule of the Dominican Order.  Her paternal uncle, Timoteo Ricci, also happened to be a priest and the chaplain for the nuns of San Vincenzo.  He offered to arrange her entry into the Dominican convent.

At first, Alessandra's father was resistant to his daughter's plan to become a religious, but when the girl fell dangerously ill, he relented and consented to her desire.  Soon after, Alessandra was miraculously healed and happily departed for Prato.  Inspired by the life of the famous Dominican, St. Catherine of Siena (d. 1380), she changed her name to Sr. Catherine upon entering the convent; she was only 13-years-old at the time she abandoned secular life.

The first five years were rough for the young novice.  During that time frame, Sr. Catherine suffered severe temptations to quit religious life coupled by health issues. Furthermore, she began experiencing episodes of ecstasy that left her senseless and completely absorbed in the contemplation of the Divine, and which caused her much embarrassment.  For example, she was assigned to the convent's kitchen and would sometimes drop dishes and food when an ecstasy unexpectedly came upon her. The other nuns, at first, misunderstood the situation and attributed Sr. Catherine's behavior to ineptitude.  Then, as the ecstatic phenomena escalated, they looked upon her with distrust; either she was seeking attention for personal gain or simply crazy.  It was only through the influence of her uncle, Fr. Timoteo, that she managed to avoid being dismissed from the convent by her superiors.  But, eventually, through her consistent practice of humility and obedience, Sr. Catherine overcame all suspicion while earning the respect of her community.

The mystical phenomena in her life came to a culmination in February 1542, when Sr. Catherine was 20-years-old. She received the Sacred Stigmata and experienced her very first "Ecstasy of the Passion", which recurred weekly. During these special ecstasies, which lasted from noon on Thursdays until 4:00pm Fridays, our Saint reenacted scenes from the Passion of Christ while her Stigmata bled profusely; her bodily postures involuntarily mimicked those of Christ's sufferings that she saw in a series of visions.  News of this wonder soon spread outside the convent walls and crowds flocked to the convent to witness the ecstasies; some even climbed atop the outer walls in the hope of catching a view of the miracle.  A papal envoy sent to investigate the events also deemed them genuine.  In the meantime, Sr. Catherine and the other nuns were unhappy with the weekly intrusions and prayed fervently for the ecstasies to cease.  God finally answered them, but only after twelve straight years of recurring ecstasies. 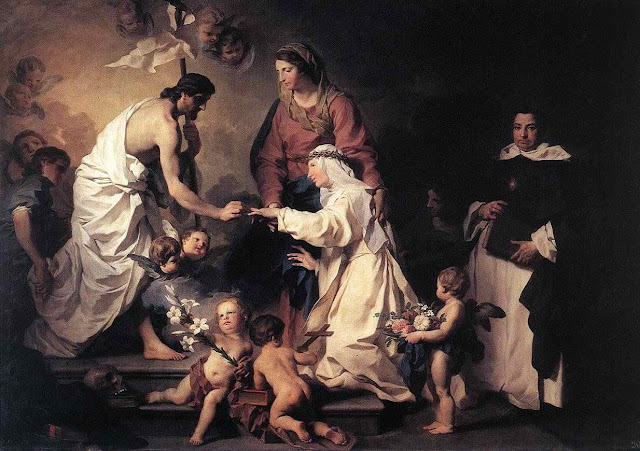 The Mystical Marriage of St. Catherine de' Ricci to Jesus during which he
gifted her with a ring of gold mounted with a brilliant diamond.

Other miraculous occurrences recorded of Sr. Catherine included her bilocations to Rome, where she conferred with St. Philip Neri (d. 1595), who openly attested to the mystical visits and spoke highly of her character.  In the same manner, she miraculously visited with St. Maria Maddalena de Pazzi (d. 1607) in her Carmelite Monastery in Florence.  There was also the ring of Mystic Espousal - a gold band with a single diamond - that she received from Christ in April 1542, shortly after she was stigmatized.  Although the ring could only be seen by her, a visible red mark surrounded her finger where the ring had its place... but on special feast days the other nuns were able to catch glimpses of the actual gold ring, itself.

... and finally, there was Sr. Catherine's sufferings on behalf of the Poor Souls in Purgatory.  She experienced frequent visits from the Holy Souls and her compassion towards them moved her to offer prayers, fasts, and other voluntary penances to alleviate their painful spiritual purification. During one notable episode, she generously volunteered to our Lord to suffer for the soul of Francesco de' Medici, a Grandduke, who was a generous financial benefactor to her convent.  Jesus approved and, for forty days, Sr. Catherine suffered the fiery purgation intended for Francesco - her body became so hot, her skin broke out with blisters and the other nuns could not enter her room due to the intense heat mysteriously emanating from her.  The pain must have been terrible, but the Saint endured the trial in complete peace, having been assured by divine revelation that the Grandduke's soul had entered into eternal rest.  These brief accounts are just a few samplings of the prodigious mystical life of St. Catherine de' Ricci. Her biography is filled with many, many other such stories.

It should be emphasized that, apart from the marvels that she experienced, Sr. Catherine was a worthy nun who lived the Christian virtues, exceptionally; her life should not be defined only by the unusual events reported of her. When her community of nuns finally recognized her innate sanctity, she was elected to successive leadership positions until she became prioress in perpetuity at aged 30... and she served her convent admirably.  During her rule, one account states that her convent's membership grew to close to 160 nuns!  A testimony to the immense, positive spiritual influence she had in the region.  In addition, she was the unofficial spiritual adviser to many prominent families in Florence, as well as to other holy individuals of her time, as already mentioned above.

Sr. Catherine died at age 67 on February 2, 1590, surrounded by the mysterious scent of flowers - the odor of sanctity - that often emanated from her person during her ecstasies.  Her body was later discovered incorrupt during the ritual exhumation that was part of the Canonization Process.  She was declared a Saint in 1746 amidst rejoicing in both Prato and Florence.  Her perfectly preserved remains are venerated in the Basilica of San Vincenzo e Santa Caterina de' Ricci, attached to the Saint's original convent.  According to feedback I personally received from the Dominican nuns of San Vincenzo Convent, St. Catherine de' Ricci's memory is still very much alive in Prato despite the passage of over four centuries.  May this Saint intercede for our personal needs and the needs of the Universal Church.

A Reflection
"Look down, we beseech Thee, O Lord, on this Thy family for which Our Lord Jesus Christ did not hesitate to be delivered into the hands of the wicked, and suffer the torments of the Cross."  ~ A prayer composed by St. Catherine de' Ricci

A Short Prayer
Lord, in the same burning spirit of love that St. Catherine had for your Church, we also pray your divine guidance and protection upon it; upon the Pope; the Clergy; consecrated men and women; upon the laity.  Amen.